The Need To Protect Religious Minorities In Pakistan!

‘Pakistan’ literally means ‘a land of serenity‘ where the state law has long abducted it’s responsibility to provide protection to religious minorities, where evil has an upper hand over state administration, where every terrorist organization operates fearlessly under a religious garb, where judiciary prowess is hard to believe, where the state authority never challenges the jihadis for their nefarious deeds, where the feudalistic views dominate the politics and the command of constitution is in the hands of a few Army commanders to decide the fate of the state. This part of earth has a special distinction, here the very accusation is a death warrant for the accused , if not by the judge then by an illiterate, hydra- headed, fickle minded mob. The name of that law appears to be ‘Blasphemy Law’ of Pakistan court panel. 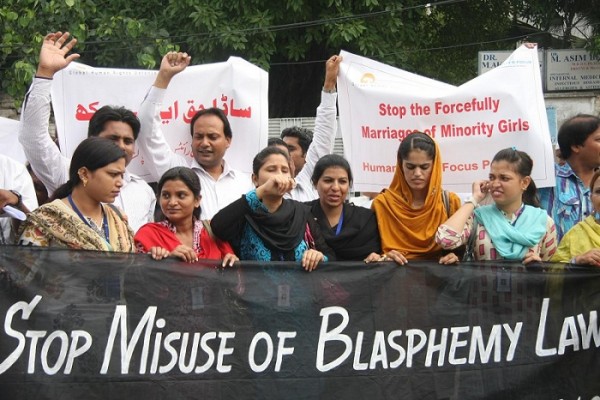 Dictionary describes this word as ‘A contemptuous or profane act, utterance, or writing concerning God or a sacred entity‘ but it’s use has far more hideous effects on people’s lives. It shows the brutalization and the state’s surrender before a pool of horrendous ‘death eaters’. Ahmadis top the list of most persecuted under this law followed up by Christians, Hindus, and Shias. This year on the day of Eid when Prime Minister Pervez Ashraf addressed his countrymen to make Pakistan “a hub of amity and harmony” a Christian family was rotting in a jail in Rawalpindi. An 11 year old girl suffering from ‘Dow’s Syndrome’ had been accused of profaning the Holy Quran and the local crowd of the so called ‘faithfuls‘ barged into her house settling for nothing less than a death sentence. ‘Death sentence’? forget her mental impairment, an 11 year old girl being accused of blasphemy, is a delusion and throws light on the jaundiced and belligerent behavior of the society and the law of Pak.

It’s downright absurd and incorrigible to drag the loins of religion and state laws into the hands of a few war mongers misguided by cruelty and injustice. The blasphemy cases of Christian girls being abducted, hindu girls being forced to marry Muslim men and covert to Islam, the frenzied chants of ‘Shias are infidels’ represent maliciousness. Unfortunately apathy, malice and hatred seem to be the driving force of the mindset of people, under the name ‘Blasphemy’

Brazilian Labour Market Amid The Coronavirus Pandemic: Impact And The Way Forward