By Krishna Pathak in Society

After 65 years of independence, the story of India is not all hope and glitter. In its wider dark spaces, which threaten to get bigger and darker, discrimination and inequity fester. Among its worst sufferer are children, women and families who continue to pay for a system they neither molded nor understand. Yes, I’m talking about the social discrimination based on the outlawed caste system which is still very much intact. 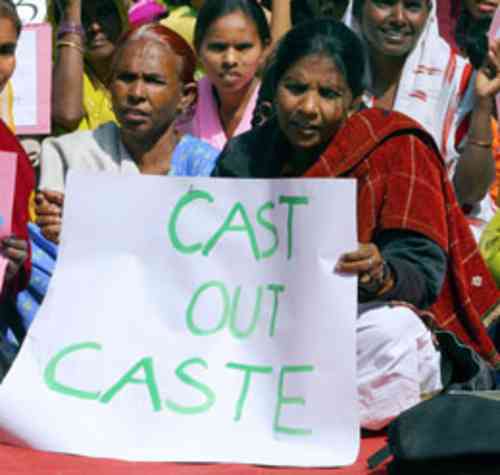 An 11 year old Dalit boy from Madurai district of Tamil Nadu was humiliated and was forced to carry his sandals on his head as punishment (source: Frontline). His crime? Wearing footwear in the caste-Hindu area, a place where footwear is considered a status symbol rather than protective gear! The continuous effect of such practices and abuse of Dalit children is that they are kept powerless, separate and unequal.

This is not from the 18th century, I’m talking about the present day. The epistemic semantic mechanism that keeps the powerless in their place has never gone out of fashion. The stark reality is that our country regrettably shines out with the evil of intolerance and caste discrimination prevalent in its myriad forms. The perception of the dominant group, the so called upper castes, is bestowed by the Varna system- the scriptural legitimacy of caste system on Indian society and every time a feud occurs they have the backup support from this Varna system to legitimize their pseudo beliefs about economic and social form of caste based discrimination.

The past and present of India has been represented largely by the casteist mindset. This is a fact and this is the problem! Social problems like this are begging for attention. The country needs a social revolution. I believe that if we are truly committed to an equitable society that stands for social justice, we have no choice but to strive and struggle for ending caste. It has to be a broad movement not only for Dalits but for all those committed to basic human rights and dignity and principles of justice, equality, liberty and fraternity. It has to be a movement against the religious rituals and holy texts which keep them subjugated for centuries or enslaved their minds. Together, we must unite to force the Indian government to rise above an entrenched caste mentality and to properly enforce its laws, implement its politics and to fulfill its responsibility to protect the basic human rights of all its citizens.