“They Gang Raped My Daughters In Front Of Me”: Why Are Women The Worst Hit In Every Communal Riot?

By Harsh Vasani in Society

“But what they did to my sister-in-law’s sister Kausar Bano was horrific and heinous. She was 9 months pregnant. They cut open her belly, took out her foetus with a sword and threw it into a blazing fire. Then they burnt her as well.”
Source: Saira Banu, Naroda Patia (recorded at the Shah-e-Alam Camp on March 27th, 2002).

“The mob started chasing us with burning tyres after we were forced to leave Gangotri society. It was then that they raped many girls. We saw about 8-10 rapes. We saw them strip 16-year-old Mehrunissa. They were stripping themselves and beckoning to the girls. Then they raped them right there on the road. We saw a girl’s vagina being slit open. Then they were burnt. Now there is no evidence.”
Source: Kulsum Bibi, Shah-e-Alam Camp, March 27, 2002 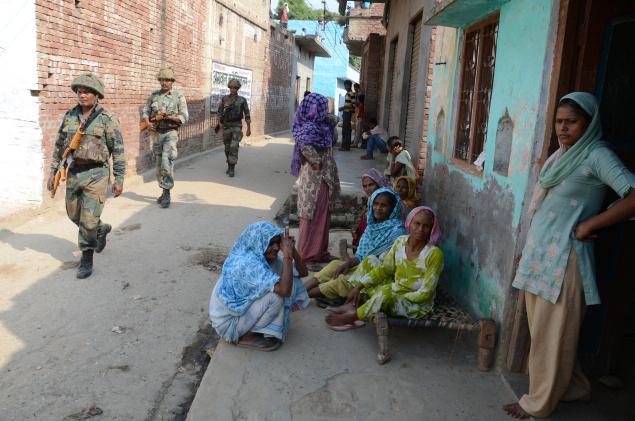 “Four women of my family, including my three daughters (age 17, 18 and 21 years), were held captive by 10-13 rioters and gang-raped in front of me. I was forced to see the shameful and brutal act.”

A multi religious and fervid society like ours bestows women on a higher pedestal; where they signify the ‘sanctity and dignity’ of the household and community. Perhaps, this is a reason the unfathomable burden of communal riots lies with the women the most.
The curse of being a woman in India – where they are venerated and idolised as Goddesses, but are fervently denied the humaneness which takes away the piety. They shall always be distanced, always sitting atop the pedestal, to be defended by the men. This sense of ‘honour’ of a man attached to the women in the family is overtly patriarchal, effacing the identity of women.

Consider the propaganda of ‘Love Jihad’, where Muslim men woo Hindu women and eventually convert them to Islam, used by the mandarins of VHP (Vishwa Hindu Parishad) in Muzaffarnagar recently to inflame the passions. Behind the outrageous absurdity and preposterousness of the statement lies the mentality which perceives women as a tool in gaining one-upmanship over ‘the other’.

11 years ago, this was exactly what a Gujarati daily; Sandesh, did. Besides reporting the Godhra carnage in a provocative language, they reported absolutely fabricated stories of Muslim men picking up Hindu women from the train compartment, of dead bodies of kidnapped women found with their breasts cut off. These concocted stories were later retracted very inconspicuously, but by then the damage was done. These stories were enough fuel for the mobs to avenge by indulging in greater brutality towards the women of the other community. As Aziz Tankarvi, editor of Gujarat Today told to a fact finding team, “Murder ho jata hai, chot lagti hai, to aadmi chup sahan kar leta hai, lekin agar maa, behen, beti ke saath ziyadti hoti hai to voh jawaab dega, badla lega.”

The fact of the matter is that with every riot, modesty and humanity go for a hit with women being the most victimised. The deep rooted agony faced by them, and the inability of our society to eliminate it; and emerge as a civilised society instead of being tangled in antiquated fault lines, mobilised by demagogues, is at once tragic and shameful.