Is Cyclone Phailin Just The Beginning? Find Out More By Joining This Urgent Climate Chat 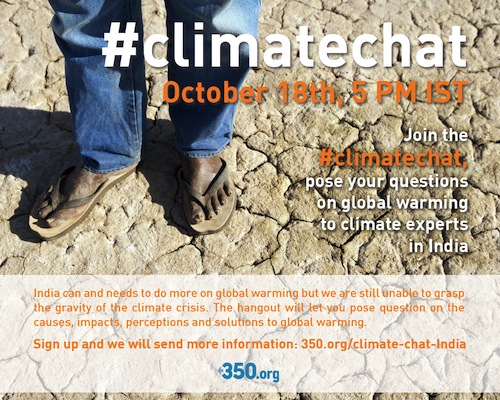 Cyclone Phailin left a trail of destruction in its path as it ravaged the coastal villages of Odisha and Andhra. Thanks to a massive evacuation plan, thousands of lives have been saved and for that the Government deserves a pat on the back. And now, as with most disasters around the world, the uphill task of rehabilitating and restoring livelihoods begins.

But is cyclone Phailin just the beginning? Is India set to face more extreme weather disasters in the future?

Consider this:
1. We started 2013 with one of the coldest years in Northern India over the last 4 decades
2. Later, Maharashtra faced one of its worst droughts
3. Assam was under floods displacing 1 lakh people
4. Uttarakhand floods put more than the fear of god in people
5. Now, cyclone Phailin has struck us

All this and more in the span of mere 10 months have left millions of our fellow citizens without a stable livelihood. What does all this mean? What’s next?

Global warming has played a significant role in all these disasters and with rising temperatures around the world, we can only expect more of such tremendous impacts. 800 scientists released a report early this month which stated that extreme weather events are more likely to occur if humans do not reduce greenhouse gases at a rapid pace.

We need to adapt to some of the inescapable disasters that will hit India as a result of global warming, and we need stronger political leadership to do so. India did well to save thousands of lives but we will be walking blindfolded if we don’t acknowledge the impact global warming will have on us. And all that starts with us questioning and learning.

Join us for the climate chat, where you set the agenda with your questions on global warming and we get our experts to answer them

Greater political leadership comes from a greater public demand to act on global warming. It’s up to you to raise these important questions and make the vital connections between extreme weather and global warming.