By Annie Fraser in Environment

Addiction
É™ËˆdÉªkÊƒ(É™)n/
noun: addiction;â€ƒplural noun: addictions
1. The fact or condition of being addicted to a particular substance or activity.

Upon reading Merriam Webster’s definition for the word addiction, many substances may initially come to mind, such as drugs and alcohol. There’s one substance, though, that lies outside of the scope of the substance abuse discussion, but that is equally as dangerous, and more widely used.

We, as a society are addicted to plastics.

Its convenience and practicality is hard to match. However, as a non-biodegradable substance, plastic is progressively accumulating and suffocating our Earth, posing serious environmental dangers for future generations.The logical solution for this crisis is to start acting now. By reducing plastic usage and accumulation, our country will face a brighter future. Government recognized this, and took many steps to prevent the usage of plastic. However, problems existed within implementation and, therefore, plastic usage has persisted and grown. 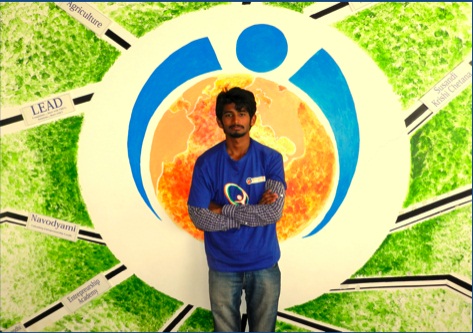 Sai Prakash Rao, a young engineering student from KLEIT, Hubli, Karnataka, has decided to tackle the war on plastics himself. His vision? To eradicate plastic usage by approaching individuals of local communities and urging them to change their behaviour. And he’s well on his way towards making his vision a reality. Sai says, “There’s an Indian saying that you have seven lives. Even if we’re born seven times, the plastic will still be there.”

After receiving backing from the Deshpande Foundation’s Leaders Accelerating Development (LEAD) Program, Sai implemented “plastic eradication”, in which he and a group of fellow students approached every person in his colony, educated them about the dangers of plastic usage, and collected plastic from their homes to discourage future reliance on plastic. Sai conducted the project in phases to ensure that its impact remained on-going. With each visit, plastic usage from each home was significantly reduced. After three visits within the first month, plastic usage in the colony had reduced by 90%.

The success of this initiative does not stop there; motivated by the success of Sai’s project, other students in his college expanded Plastic Eradication and implemented the same initiative throughout other colonies in the cities of Hubli and Dharwad, Karnataka.

The impacts of these initiatives are big, but their implications are even bigger. What Sai’s story shows us is that large and scalable impact is feasible if we approach problems locally, and if each of us do our part.