Cyclone Phailin Didn’t Take Lives, But Destroyed Many Livelihoods And YOU Can Help The Survivors

They say lightning doesn’t strike the same place twice but given the unusual times that we live in, we shouldn’t be surprised if it did. As I write this, another cyclonic storm Helen is hurtling towards the coast of Andhra Pradesh, just a month after cyclone Phailin devastated villages along Odisha’s coast. With rising global temperatures, climate change has increased the odds of extreme weather like cyclones and floods. 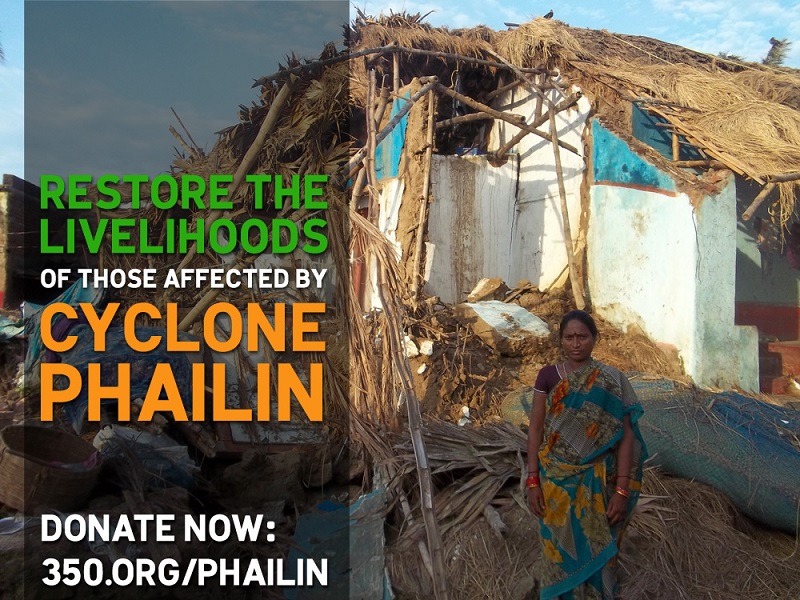 The media might have shifted its attention away from Phailin but the hard realities on the ground need our attention now more than ever before. Fisher folk and poor farmers who have lost their homes, crops, fishing nets, and therefore livelihoods need support in rehabilitating and rebuilding their lives. Last week Dr. Krishna Kumar, the collector of Ganjam district – one of the worst impacted by the cyclone – made an appeal to respond to the overwhelming need for resources in restoring shelter and livelihoods for the thousands affected.

350.org along with Council of Social Action, a local NGO partner in Odisha is urging you to support the relief and rehabilitation work across 1000 families in Ganjam district. Your donations will directly provide essential resources in the form of shelter, housing, medication, sanitation, clothing, stationery etc. More importantly, we want to lobby and work with the local administration to adopt strong climate adaptation practices whilst rehabilitating people.

Uttarakhand floods showed us how vulnerable we are; cyclone Phailin made international headlines; and typhoon Haiyan in the Philippines shattered all records. It’s all connected. Climate change has increased the odds of extreme weather events around the world, but it’s often those who are the poorest and contribute the least to the problem, who pay the biggest price.

Click here. Support the survivors of Phailin to rebuild their livelihoods and lives.