‘Free The Arctic 30’ Echoed From 30 Cities In India, In Solidarity With The Jailed Environmental Activists

While most people live their lives as passersby, there are some who are born to move mountains. The Arctic 30 are perhaps those chosen few. They don’t spend their time talking about change with their friends over coffee. Instead, they go out there and really do something about it. 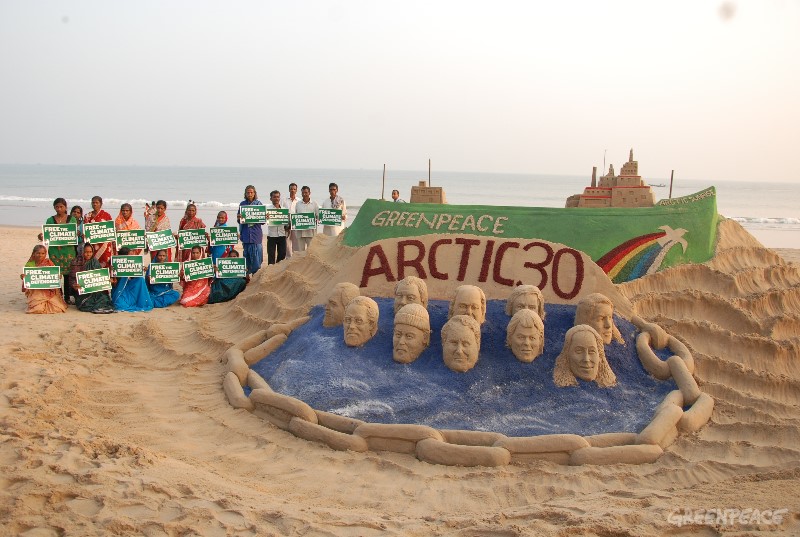 Exactly two months ago, on September 18th, members of the Arctic 30 were peacefully protesting against oil drilling in the Arctic. As a result, they were arrested and charged with piracy and later, hooliganism. Now they may face a jail term of up to 7 years.

As you read this, the Arctic 30 have spent two months in a Russian prison. In order to show support for the Arctic 30, Greenpeace India started a 30-hour protest at Jantar Mantar in New Delhi on Saturday, November 16th. 29 other cities followed suit, making the response from India rather humbling. Supporters, volunteers, friends of friends and family stood together for the Arctic 30. From Trivandrum down south to Ladakh up north, there was no stopping. Students in Kolkata painted their faces with ‘Free the Arctic 30’, hordes of students from MICA, Ahmedabad were out on the streets, talking to people about the Arctic 30 and one little girl in Cochin drew a card for the Arctic 30, wishing that they come back home for Christmas.

Cutting across geographies, this event of solidarity is testimony to believing in the right, no matter how difficult it may seem in the beginning. This is the true spirit of change, and that’s what the Arctic 30 believe in.

Till now, over 27,750 people from India have sent a letter to the Russian Ambassador in India to release the Arctic 30. Also, almost 40 members of the parliament have endorsed their support.

Sums up Samit Aich, Executive Director, Greenpeace India, “Greenpeace India is humbled by this show of solidarity by people from all walks of life and we appreciate the effort that Indians are putting into drawing attention towards the plight of the Arctic 30 in the prison. The oil drilling in the Arctic by companies like Gazprom is destroying the already fragile environment of the Arctic. Climate change will impact all of us and no country is immune to it. The Arctic 30 bravely protested against the threat of oil drilling in the region and are now bearing the consequences of peaceful confrontation. We must do all we can in our power to help in freeing the Arctic 30.”