When The Police Turns Against You, Where Do You Go For Justice?

I hope that you are aware of that in Samsherganj area of the Murshidabad district, West Bengal, an anti-wine movement has been going on for last few years. On that regard, people of that locality formed a civic body, i.e. Nagarik Adhikar Suraksha Manch which includes people from different sections of the society such as social activists, local leaders, intellectuals and so on. Their demand is to cancel the establishment of the proposed wine factory near Basudebpur bus stand, Murshidabad. Akhtar Hossain, from Chachanda village of Samsherganj, Murshidabad, was one of those activists who played prominent role in the movement. 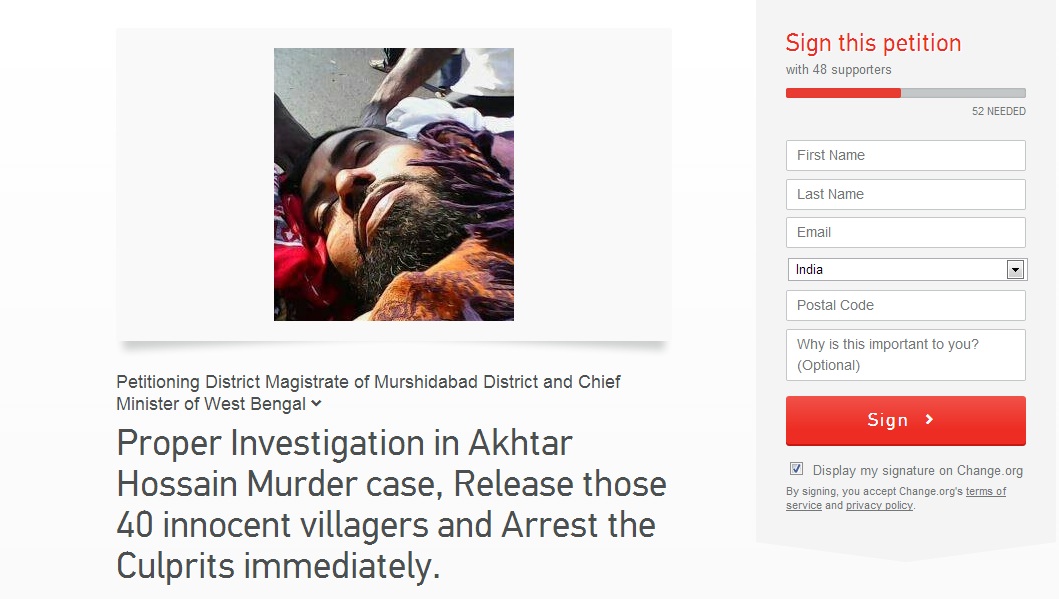 Unfortunately, on 10th November, 2013 when Akhtar Hossain was returning home from his pharmacy in Tarapur of Samsherganj block, Murshidabad, he was supposedly murdered by a few unknown people. According to local people, there is a connection of those people who were about to set up the wine factory,Â in this unfortunate incident. The day after the ‘murder’, some people gathered in the place where he was murdered near Tarapur beside NH-34 and demanded proper investigation and punishment for the culprits. But police lathi charged and arrested few villagers who took part in the protest. They arrested people not only from the protest ground but also from their respective homes. Almost 40 people have been arrested so far.

Where police is supposed to arrest those alleged people, on the contrary, it seems that the police is in a deliberate effort to prove it as an accident and arresting protesters. So, there is a doubt in the air that police is indirectly trying to help a group of people and protect their interests by arresting the local poor, helpless people. The obvious question comes is why is the police not arresting those alleged people and instead arresting people who are asking for justice and claiming for proper investigation of the murder. We expect good governance and proper law and order situation in the state of West Bengal and hope that police will act in a positive way. The demands of the local people are:

– Release those 40 villagers who are supposedly innocent and arrested just because of protesting against the murder.

– A proper probe of the murder of Akhtar Hossain.

– Immediate arrest all those who are directly or indirectly involved in the murder.

Click here to sign the petition demanding proper investigation in Akhtar Hossain Murder case, the release of those 40 innocent villagers and the immediate arrest of the culprits.