And Delhi Has A New Chief Minister: Arvind Kejriwal Swears In

Today, Delhi’s youngest ever Chief Minister was sworn in. Arvind Kejriwal, with his trademark Aam Aadmi cap rode the metro to the ceremony today – showcasing how the aam aadmi travels. Swearing in with over one lakh people cheering for him at the Ram Leela maidan, Kejriwal did what many thought was the unthinkable. 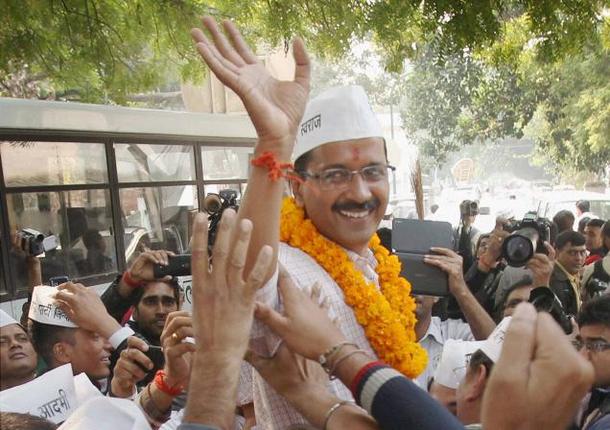 With a one year old party and campaign, it is “nothing short of a miracle”, as Kejriwal described it himself. Mr Kejriwal delivered a heart-felt speech after taking his oath. “I appeal to my party let us never become arrogant,” he said and added, “we are here to serve.”

Making governance more transparent and inclusive and checking corruption was what he pitched in a highly effective marketing campaign ahead of the Delhi election. Today, he urged the city, “Let us swear that we will never seek nor offer a bribe.” The sea of supporters roared its assent.

Kejriwal has emerged as a new hope, rejecting the VIP culture, and has been given a starling mandate against corruption.

His Aam Aadmi Party made a stunning electoral debut in the Delhi election, placing second. The ruling Congress was forced into a poor third, and is lending external support to his minority government.

Though the BJP did win most seats, it did not get a majority and decided it would not try to form the government.

Unlike his predecessors, Kejriwal has rejected the VIP culture and stated clearly that he and his ministers will not take the sprawling bungalows surrounded by lush lawns in Delhi. He plans to live modestly, in a Government flat, if allotted one, or continue living in his fourth-storey flat in Ghaziabad. He has also declined personal police protection.

As Kejriwal steps in as the new CM, people’s expectations are high, and so are his promises. Will it be easy for him to deliver?

What do you think about Arvind Kejriwal as Delhi’s new Chief Minister?