By Shibayan Raha in Politics

The facade of a popular people powered government seems to be fading away very quickly in Delhi. If it was the alleged gang-rape of a Danish tourist the other day and the reaction of the chief minister, today it is the act of vigilante justice by Aam Aadmi Party volunteers that have shocked us again. 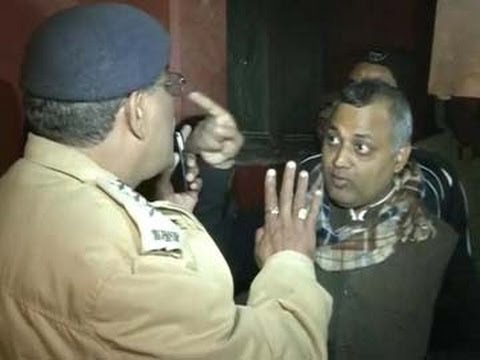 The incident involving Minister Somnath Bharti yesterday where he went on a raid in Khirki extension late at night against what he alleged was prostitution and the drama after that, smacks of racism. Some reference from him:

“Yeh hum aur aap jaise nahin hain (They are not like you or me),” Bharti said.

He also claimed “Nigerian nationals are involved in prostitution and drug trafficking in the Khirki village area.” – Source: IBN Live . But Minister Bharti didn’t or failed to even provide evidence to back his claim. The Delhi police said the Nigerian national against whom Somnath Bharti had levelled allegations, has not tested positive for any drugs.

“Less than 24 hours after he led a midnight raid and tried to bully police into arresting some “Nigerians or Ugandans” who he alleged were members of “a prostitution-and-drug ring”, Delhi Law Minister Somnath Bharti returned to the very spot on Thursday and asked residents to draw up a list of houses where “such people” live and said he would personally check each one.”

People from the African countries are our guests unless they are engaged in any crime or are sentenced by court of law. Till then we as citizens of a host country don’t have any right to accuse them or harass them in any kind. What Somnath Bharti and Aam Aadmi Party volunteers have done is xenophobic and racist in nature and spirit. Just because Mr. Bharti received complaints from neighbours, he cannot go and barge into someone’s house. Neither can he force the police to do that. There are certain legal ways to do this. File a complaint and follow it up. If it doesn’t happen then go to the court. As a practicing lawyer and as a law minister, he should have known the facts.

Khirki Extension in Malviya Nagar does host a lot of people from the African countries just like many other Indian immigrants. The place is comparatively cheaper and is near to a metro station. Most of the African immigrants are engaged in business like laundry service, eateries, salon, export business to name a few. While some might be engaged in illegal activities but that doesn’t gives us the right to generalise a whole community. If we do that then we should put Aam Aadmi party in the same lines as other mainstream parties.

The above incident and another one where Minister Rakhi Birla wanted cops to break into a house shows an uncanny attempt by Aam Aadmi Party to engage in cheap populist tactics and not effective government in Delhi. The leadership at AAP has to understand one thing: Populist policies won’t give people an effective government and when that doesn’t happen, people will vote them out the same way they did to other parties. Aam Aadmi Party and its leadership needs to rein in its vigilante force right now, suspend Minister Bharti and make sure this incident is not repeated again. This comes from someone who has long believed in the idea of swaraj and the anti-corruption movement led by Arvind Kejriwal.