A Man”s Fight For His Island And The Battle Against Global Warming: The Question Is, Can He Save The Maldives?

What do you do, when you are at the front-line of the battle against global warming? 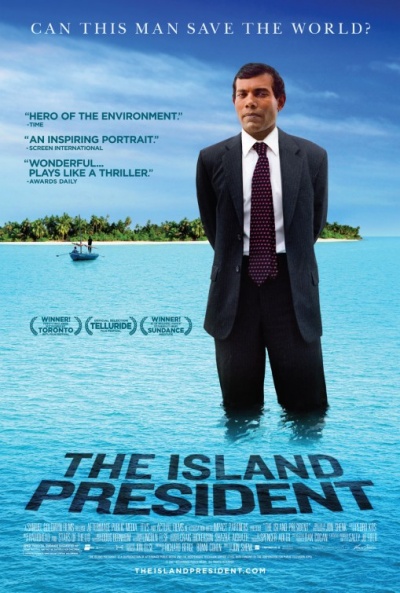 There are various options; either to deny the existence of the effects of global warming, which the republican establishment and tea party establishment in United States has been doing creatively and successfully, the other could be to blame the other party. The third one is to fight for your very existence at world forums.Â Precisely this, is what the Maldives president MohamedÂ Nasheed has been doing. To gather enough momentum so as to bring carbon cuts from 375 ppm to 350 parts per million in the atmosphere.

To think for one second that this documentary is a story of David v/s Goliath, would be wrong. Because in the end, the small Israeli boy David did beat Goliath and won the battle. However, the frustrated president is nowhere near his stated goals to protect his island from rising sea levels. Instead, he is bogged down by even bigger nations like China, India and US which do not want to accept responsibility and mandatory carbon footprint cuts.

The documentary is an anxious and frustrated narration of the island nation of Maldives, which only recently came out and elected MohamedÂ Nasheed who freed his nation from the dictatorial regime of Gayoom.Â However, the history of creative destruction and industrialization is about to change the fate of Maldives as rapid global warming can wipe it out off the face of the earth. The low lying nation actively tries to lobby big nations in the 2009 Copenhagen summit to accept cuts and save the low lying nations whose geography is about to become history.

While he tries to save his nation, he gathers international pressure in the COP-15, 2009 meeting in Copenhagen and gives a big push to the climate debate, to move beyond blaming each other and look at other nuances. The question is, can this man save the island?

Love Films? Our Award-Winning Jury Might Select Yours In The Biggest Filmmaking Festival

Opinion: Once The Fourth Pillar Of Democracy, Indian Media Is A Putrid Wormhole In 2020

Opinion: Is The Indian Media A Watchdog Or A ‘Lapdog’?