Just as the 16th General Election is flagged off in India, it is heartening to note that — for the first time ever — most of the major political parties in the fray have allotted a special section focusing on children’s issues in their manifestos. 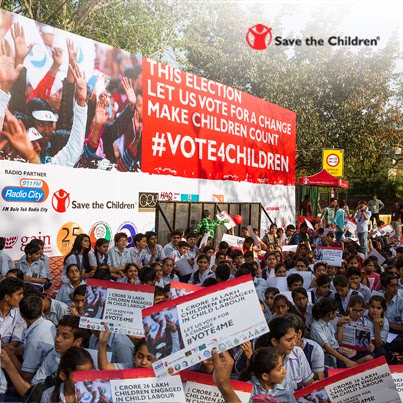 This wouldn’t have been possible without each one of you using the power of your voice for children.

This means a lot for India’s children who comprise about 40 per cent of the country’s population and yet do not have a share of voice that you and me have.Â Children can’t vote for themselves. It becomes even more critical that we, the responsible citizens influence the political agenda to represent issues and concerns of children.

In a democratic nation, elections give us all an opportunity – wider public, civil society, NGOs and other organizations to engage with political parties to influence the governance and future course of action, which will hopefully lead to policy reforms and ‘change’ for children, especially for the marginalised and excluded.

By standing up for children today you have taken a crucial step in helping shape their future as well as that of the nation. Our concerted and collective effort has amplified the voice that children should not be forgotten by voters and political parties in the world’s largest democratic exercise.

As you already know, Save the Children had launched the #VOTE4CHILDREN campaign in collaboration with Youth Ki Awaaz and your constant support for the issue has brought us this far.

The #VOTE4CHILDREN campaign will continue to engage with you through the course of the campaign journey and together we will surely reach many more milestones for India’s children.

What Your Period Tracking App Knows About You

Periods, Sex, Love Marriages: When Will Our Society Be Ready To Bust Taboos?

Sanitary Napkins Come Under Single Use Plastics Too