Meri Awaaz: An App That Lets You File Civic Complaints Without Stepping Into A Government Office

By Mayank Jain in Politics, Sci-Tech

When was the last time you were able to report a civic complaint to the concerned authority? Electricity outages, water shortage and potholes on the road are a common sight even in metropolitans like Delhi and Mumbai and as you go deeper into the interiors of the country, the problems get graver as law, order and basic amenities erode faster than the reception of mobile networks. The problem with the problems in the democracy is that it usually takes a long time to solve them and a corruption ridden country like ours takes it forever to hear people’s problems. This is where citizen oriented governance steps in and technology has a big role to play in changing the way the country is governed.

A new app which is being rolled out today aims to deliver redressal of complaints to the citizenry on their fingertips through their android mobile phones. The app, called Meri Awaaz aims to bridge the gap between the citizens and the concerned officials in the government by taking their complaints to the respective departments and following up with them about the progress on the complaints within the stipulated time.

This application is the brainchild of Aditya Nayak, 22, and is a reflection of the new breed of entrepreneurs who want to lead the change instead of just focusing on making billion dollar companies which revolve around quick profits and nothing else.

“I have a background in UX design and user research by experience and in technology by education. I currently run Mutiny Labs which is a product design collective for web and mobile products. I have been involved in startups since I was 17. I have failed multiple times and have kept going,” he reveals.

The app is a smooth interface styled with a pleasing minimalistic theme that does what it is supposed to in a few taps. The functionality is just how it should be and a few taps take you to the complaint page where you can report issues about roads, electricity, water, law and order to sanitation and transportation, conveniently by selecting the category. The app detects your location and gives you an option to attach a picture quickly to the complaint and submit it.Â On the backend, the work begins as soon as a complaint is submitted. The system gets on the task of routing the complaint to the official in the relevant department. 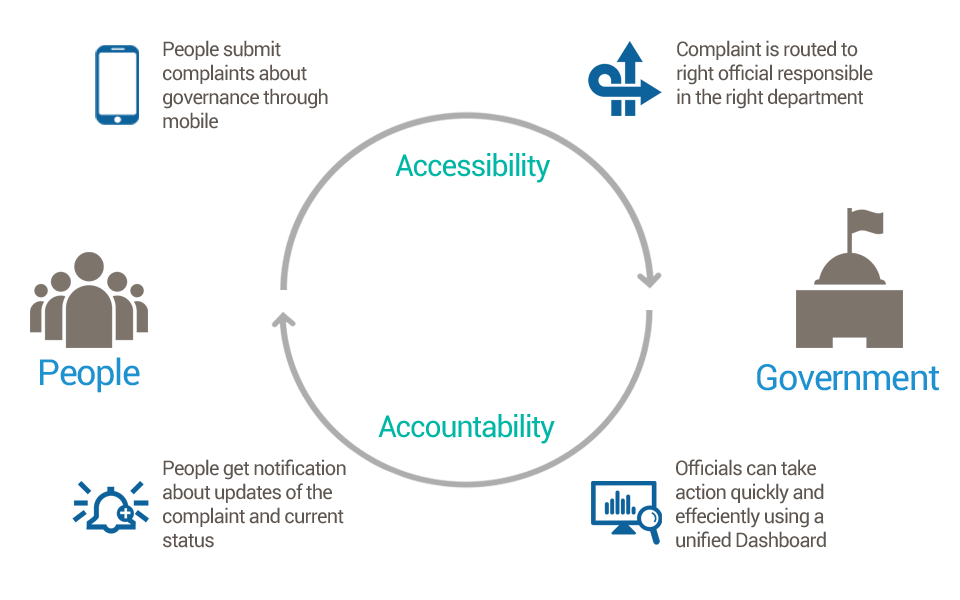 The officials will be given access to a dashboard that will help them organize issues and respond efficiently. The dashboard is still in the works and the team is trying to build the movement around it to urge the government to adopt such systems. For now, the complaints will be forwarded through an email which will hopefully be quick and efficient enough for follow ups.

For Aditya, developing this app has come after years of frustration coupled with the motivation to change things for the better and making technology the tool for disruption. He shares his motivation behind this app,

“I am driven by a passion for change. My journey towards making an impact started at 15 when I founded a youth movement called Youth for India. Later, I moved onto building a social network for changemakers at nextgenIndia.com.
About the app, we started working on a new product called Ingage at Mutiny Labs in the early summer of 2014 that seeks to solve the challenge of customer centricity. It helps companies listen to their customers’ feedback, respond effectively and learn from the insights to drive change and create business value.Â All along the way, we knew that this technology has a bigger application in the government to enable ‘people centric governance’ and we decided to build the app now since the government is now opening up to technology.”

A major problem in the old school ways of lodging written complaints is a rather careless attitude and missing priorities of those in offices. The app seeks to correct that lax system of public governance by escalating the complaints if they are not addressed in a particular time.

What needs to be seen however, is the actual results that the app is able to deliver since dealing with government and unwilling officials is a task in itself. Getting them to use technology and maintain the dashboard will be a whole another task for the developers. Scalability must be considered as well since it might get hard for the app to manage multiple requests pinging at the same time and getting officials to respond on a pile of such complaints might be a tough nut to crack. The intent and the product look promising for now and if all goes well, it might just falsify all these reservations and improveÂ governance for us, forever.

The application is built around the idea of introducing efficient governance and not letting issues rot in files when something can be done about them. The end user will be the major beneficiary of a responsive system which can further turn into a work ethic of sorts if kept up for some time.

The ailing system needs some checks and measures and the team has planned to put them in place with the app. There is a reporting and evaluating mechanism for the higher officials about the performance of their subordinates using the dashboard. It also tracks key performance metrics like average response time, issues pending, average redressal time across different services, departments and wards.

Data thus generated from this app can prove to be a bridge between the ideal system and the current state of affairs and we can then, take the process of rebuilding and rejuvenating a governance delivery system forward from there. These features will be introduced into the system at a later stage but they might prove to be very efficient tools in the hands of citizens.

When asked about his vision to change the world, Aditya was ready with an answer,

“We want to change the world with audacity, clarity and excellence. I believe that change can happen if it is financially sustainable and I believe it is possible. I want to drive real change that is sustainable and viable by market forces using disruptive innovation though design thinking.”