The Problems With Systemic ‘Saffronisation’ Of Education In India

By Heeba Din in Politics

Did you know that Qutub Minar was built by emperor Samudragupta and its real name was Vishnu Stambha, or that our original ancestors Manu and Shatrun gave life to this earth. That man took birth in Tibet, originally a part of India, and all beings were Aryan beings. Or that stem cell research was invented by India’s Dr. Balkrishna Ganpat Matapurkar, or that invention of television dates back to the Indian rishis using their yog vidya which would help them attain divya drishti for e.g. In Mahabharata, Sanjaya sitting inside a palace in Hastinapur and using his divya shakti would give a live update of the battle of Mahabharata, to the blind Dhritarashtra? 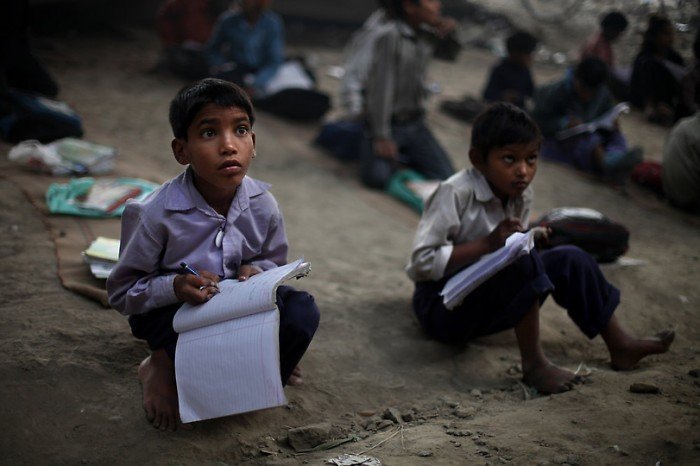 These are few of the “Facts” about the world and national history that lakhs of students are learning as a part of their curriculum under RSS run schools all over India. One may laugh at or simply overlook the digressing ‘facts‘ mentioned above, but the underlying impact and erroneous amount of details and portrayals regarding minorities and different ideologies other than Hindus have set alarm bells ringing in the past. The National Steering Committee on Textbook Evaluation (consisting of a large number of experts from all over the country) appointed by the NCERT itself, a few years ago, came to the conclusion that ‘the main purpose which these books would serve is to gradually transform the young children into bigoted morons in the garb of instilling in them patriotism’.

While The Rashtriya Swamayamsevak Sangh (RSS) has never deviated from its core ideology of forming a ‘Hindu Rastra’, it is the systematic attempt of rewriting history with saffron ink through its vast network of educational institutes like vidya bharti, one of the largest chain of private schools in India, catering mainly to lower middle class, Vanvasi Kalyan Ashram (VKA) which specialises in hostels for adivasi children along with other activities and Ekal Vidyalaya Foundation, which runs single pre-school teacher centres, where students are taught basic reading and writing of Sanskrit and Sanskrit behaviours, is a clear indicator of RSS’s slow but deliberate attempt of “saffronising” the education system of the country. And in the process, feeding large number of young brains with their core ideology of Hindutva.

Now one might think how a right wing Hindu Nationalist group can rewrite the history of a mighty nation like India. The HRD ministry’s approval of creation of The Bharatiya Shiksha Niti Ayog (BSNA), which has been constituted by the RSS-affiliated Shiksha Sanskriti Utthan Nyas, that is mandated to “suggest corrective steps” to “Indianize” the education system, which will be headed by the controversial Dinanath Batra, the same person who advised Madhya PradeshÂ Chief Minister Shivraj Singh Chouhan to remove sex education from the state curriculum and got Penguin to pulp Wendy Doniger’s book “The Hindus: An Alternative History”, suggests which waves is the BJP led government riding.

Coincidentally, the major attempts in recent past to change the course of Indian history and revamping the education system, where minorities were portrayed as main problems of the nation and Muslims, Christians and Parsis referred to as foreigners, where struggle for freedom was portrayed as war against the Muslims; all done in the name of instilling nationalism and national pride have been done in the last two terms of the BJP rule. First with Murli Manohar Joshi, the then HRD minster, going all out to saffronise the education system by bringing changes in NCERT text along with huge changes in the reconstitution of major educational bodies like Indian Institute of Advanced Studies, the NCERT and the Indian Council of Historical Research to include members having pro BJP/RSS stand. And now with Smriti Irani, the current HRD minster, trying to bring Vedas, ancient Hindu texts and Unpanishads in the syllabus of class 8th, 9th and 10th.

One might profess that reading ancient texts and scripts has no communal aspect to it, but the agencies and institutions propagating the move are the one that need to be scrutinised. Created by the RSS in 1978, the Vidya Bharati, Akhil Bharatiya Shiksha Sansthan network, focuses on moral, extracurricular and physical education for “mind, body and spirit.” The Vidya Bharati educational mission is founded on the objective of training children to see themselves as protectors of a Hindu nation. The Vidya Bharati system supervises over 18,000 schools across India, with 1.8 million students and 80,000 teachers. A shared curriculum is used across the country. The Vidya Bharati operates 60 graduate institutions. About 5,000 Vidya Bharatis are endorsed by education boards primarily in states where the Bharatiya Janata Party is in power. Another organisation called Bhartiya Adhyapak Parishad, an offshoot of Vidya Bharti, has trained teachers on the ideology of Hindutva. Bhartiya Itihas Sanklan yojana was set up in 1973 to re-write Indian History of the past 5000 years to prove that the ‘Aryans’ are indigenous people, not the invaders. Samskar Bharti established in 1982 with the aim of preventing western influence on Indian culture has 900 branches. Akhil Bhartiya Vidyarthi Parishad, founded in 1948, was registered in 1949. Its sole objective is to channelize the energy of the students in the task of National reconstruction. Out of 30 Central Universities, it captured 15. Its activists played a major role in the 1992 demolition of Babri Masjid.

With these organisations at the helm of affairs, the rabid distortions in historical texts and the influence on young minds under such ideology is capable of communalising the situation in no time and flaring up of sentiments in the name of patriotism and nationalism, and creating fundamentalists and extremists out of the innocent young children, who are constantly fed with an ideology of superiority of one sect and demonising of another.

The fact that the government has failed to provide free education to children is also one of the contributing factors as to why such institutions and organisations are filled with students all year round. The poor, homeless illiterate parents have no option but to send their children to these schools backing a particular ideology, the only hope for their wards to have a future.

Though BJP always took its stand against the previous ruling government’s inefficiency to stop the degradation of Indian culture and values, it is by bringing ancient texts and setting up a committee to “Indianise” education, that the current government seems to find solution to the problem. Mr. Batra, who will be heading the BSNA, a staunch advocate of revamping the whole education system with his campaign of Shiksha Bachao Andolan, which seeks to ban all ‘anti Hindu‘ books says, “NCERT textbooks will be rewritten according to the aim and objects of the nation so that it inculcates feeling of patriotism among children. Modernity is not westernisation. We want modernity with Indian base (marked by) patriotism and spiritualism.’’

What is the message that we send out to the growing child with these factual misrepresentations and deliberate exclusions of some historical events?

The ICSE History and Civics textbook, Part II for Std. X, devotes a whole chapter to the ‘Formation of the Muslim League’. But there is no mention at all of Hindu communal organisations. It is in the same book that when assassination of Mahatma Gandhi is talked about, no mention or comment is made on Nathuram Godse or the ideology that drove him to assisinate Gandhi and neither the fact that the Government Of India banned RSS because of Godse’s close links with the organisation and the Hindu Mahasabha. Similarly, the Social Studies text for standard VIII of the Gujarat State Board has a tiny sub-section titled, “The Murder of Gandhi”. This reads thus: “After Independence there were severe communal riots in India. Gandhiji tried his utmost to suppress it. Many people did not like this. Gandhiji was murdered at the hands of Godsay on 30th January 1948.”

On the other hand, the state government of Gujarat time and again has tried to meddle with the education system. On January 19, 2000, the Gujarat state education department sent out a GR directing all schools to subscribe to the RSS magazine, Sadhana. Sadhana is a monthly printed by the Gujarat unit of the RSS. Another circular brought out in December 2000 had insisted that all schools send their teachers to sanskrit training camps in preparation for the move to make the subject mandatory learning and teaching in schools. And the newly subscribed list of books for primary and secondary class is full with nationalist books written by authors like Dinanath Batra , which propagate epics and mythological instances as facts.

Call it saffronisation of education, communalisation of education or politicisation of education, the basic fact remains that young minds are increasingly becoming laboratories for fundamentalists and extremists propagating their views and ideologies, while the innocent minds get fashioned in the beliefs which are inculcated in them and the result is creation of a generation which is fed half baked truths, misrepresented facts and distorted history. Is this the generation you want to be a part of?

RSS sets up panel to supervise saffronisation of education

Communalisation of Education in India

Communalisation Of Education
The History Textbook Controversy: An Overview

The Constitutional Mandate and Education- a report

Gujarat model of using epics as facts in education