Molested At The Protest Against Molestation: How A Revolution Is Brewing In Jadavpur University 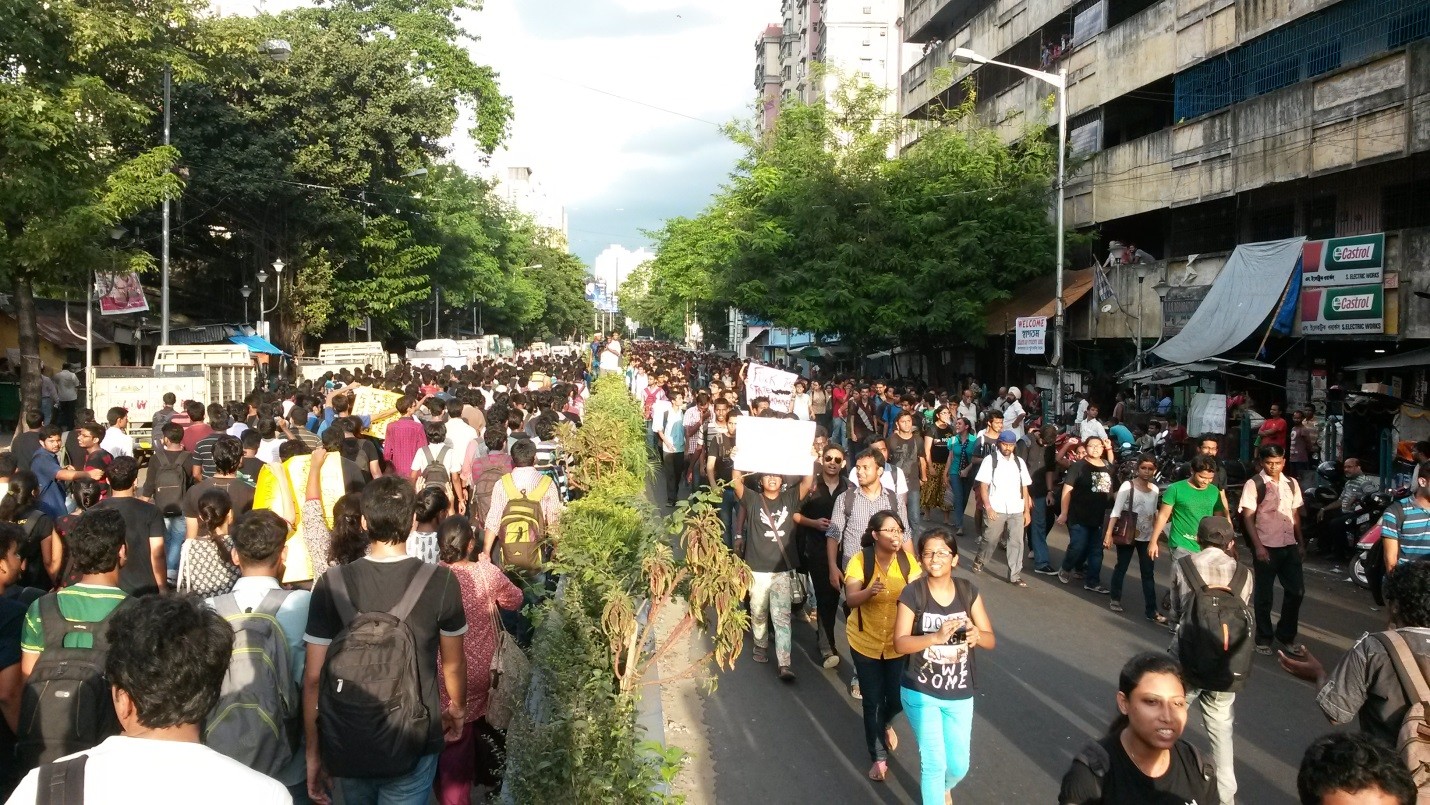 Prince Anwar Shah Road is one of the busiest thoroughfares in the city of Kolkata. It is one of those streets where you have to look alive and stay sharp lest you fall back or are drowned in a barrage of angry horns and colourful invectives. On Thursday however, for an hour or so, the street came alive with a different kind of anger.

Thrumming anger, pulsating anger, angry vocal chords vibrating furiously with calls for justice. Against police brutality inside the Jadavpur University campus, against the high handedness of the state, against their Vice (sic!) Chancellor, who unleashed the wrath of police batons and political goons on his own students.

All considerably substantial protests have one thing in common. It takes that one incident for them to snowball into the massive outrages they become. This one’s no different.

On the night of the annual cultural festival ‘Sanskriti’, August 28 2014, a second year student from the department of history was allegedly molested by a group from the hostel and her non JU friend was beaten up by the same group of students. When she decided to take the matter to the University authorities, she was met with gross indifference and apathy, with the Vice Chancellor of the University, asking her to stay away from the campus for 15 days and shrugging off his responsibility towards the safety of his students. The girl was forced to file an FIR after non action by the University authorities. Thereafter, a string of events ensued, primarily triggered off by inactivity of the VC and authorities and the biasedness of the Internal Complaint Cell(ICC) that had been set up to investigate the matter in an impartial manner. Furthermore, a General Diary was lodged by the aforesaid girl against an unauthorized visit by two unidentified women representing the University questioning the girl’s sense of propriety, dressing and sobriety on the night in question. Read detailed account here.

On September 10, at a general body meeting, it was decided that students would go for an indefinite sit in in front of the main administrative office building of the campus, Aurobindo Bhavan. Please note, that this started as a sit in and not as a ‘Gherao’ as it might be bandied about everywhere.

From the time the incident occurred till the night of September 16, the administrative functioning of the University was not hampered in any discernable way.

On September 16, after over 100 hours had gone by, word reached out that the scheduled EC meeting had completely sidelined the issue at hand, stifled the requests and demands of a new ICC and the VC went a step ahead by saying that it was beneath his dignity to talk to students and that there was nothing left to be discussed.

The Jadavpur Union Teachers’ Association (JUTA) tried to act an intermediary between the students and VC, but in vain. True to his previous high handed stance, the Vice Chancellor refused to budge from his decision and said that the matter was now in the hands of the State. The students then decided that enough was enough and proclaimed that if the VC had to leave the campus, he would have to walk over their bodies, unless he issues a statement that the investigation would be carried out in a fair and impartial manner with a new ICC at helm.

Trouble was imminent. Despite the police assuring the students of no violence, there was still an air of uncertainty. In addition, goons from the ruling party of the state began gathering in large numbers along with Trinamool’s student party on campus.

All hell broke loose at 2!

Trucks of Rapid Action forces armed with lathis and tactical gear attacked the peaceful students, who were armed with just words and their resolve to not budge from the truth. In addition, the goons from TMC attacked them mercilessly. 40 students were injured in the brutal attack while 38 were arrested and flung into the back of the police trucks. Women were beaten up mercilessly and molested. The goons even tried to rip their clothes off!

Women getting molested for voicing their protest against the molestation of a woman – Ah irony, can thou be any more disgraceful!
Following the brutal attack, the students tended to their injured. First aid was provided first thing by the morning light while the more serious ones had to be rushed to the nearby KPC hospital. A general body meeting was then called where it was decided that students would be boycotting classes indefinitely till the Vice Chancellor does not resign and till adequate action has not be taken against him, in addition to their original demand of an impartial investigation (Read detailed account here).

The two days that have followed since the brutal police crackdown have witnessed an intense fury within the students that has transcended the boundaries of colleges and institutions. An impromptu rally taken out on the 17th witnessed over 5,000 people protesting against police and state atrocities. The procession on the 18th had a staggering 8,000 participants- students, teachers, people from different walks of life expressing their support for Jadavpur University students, expressing their solidarity with them.

Here are a few pictures that caught our eye:

The most important thing to note and to realize is the fact that this movement is NO WAY politically supported by the opposition as purported by the ruling party. This is purely a students’ agitation, for students who have stood up for their right to security, sanctity and education, of their right to be heard and not to be trampled on like beetles. The police commissioner has already come out in a Press Conference downplaying the entire incident and showing edited video clips trying to salvage whatever little is left of their image. Several un-doctored videos available on youtube show otherwise.

An online campaign has commenced on change.org as a petition to the governor to condemn the brutal police action against students in Jadavpur University.

In addition to that, a mega rally has been called for on Saturday, September 20, starting from Nandan cinema complex at 2 P.M., right till the Raj Bhavan to meet the Governor, who is also the Chancellor of the University, and submit the demands of the students. Here’s the Facebook event link.

Be there, in flesh or spirit, but in solidarity, for the students of Jadavpur University. Because they stood up for what’s right and have stood strong in face of brutality, with a song of rebellion on their lips. You may think that this does not affect you in any way, but history has gone on to show otherwise. It happened to them. It could happen to you. Unless, you decide to take up a stand for what you believe is right.

The students of the university, however, haven’t forgotten the original incident that started the whole agitation.Â “It is important for us not to forget the original issue. We have to get justice for the girl who has been wronged. And justice we shall get” says a student.

It is also interesting to note that the mainstream media has been downplaying the situation. In fact, it hasn’t been mentioned in any way in most major publications/ news channels. The ones which do, present a picture far removed from reality where the reports are mostly against the students. The evidence present on various social media platforms, however, is irrefutable proof of the atrocity of the state run police, the greasy political machinations that run the state and the callousness of the administration towards the students of its own University.

A chant for all the pent up anger and the rage against the atrocity and apathy of the University officials and the State seemed to have sent tremors throughout the country. The ‘mini revolution’ or so it is being termed, draws life from this chant that mobilizes thousands of people on social media forcing them to think and decide and act on what’s right. Everywhere, from JNU in Delhi to IIT in Bombay, one chant rises prominently above the rest and trends at the top.