Our play ‘Welcome to the Machine’ produced by Ankur, the theater society of SGTB Khalsa College, has been issued a letter seeking its “immediate ban”. The play investigates how religious forces assert their dominance over ‘others’ by means of culture, education and institutional structures.

It principally articulates manipulation of religion for vested interests to polarise and gain political power, furthermore giving it a false garb of a ‘spontaneous communal riot‘ which in reality is a pogrom sponsored by the state. Controlling the state machinery, colouring the institutes in their own colour, this is the nefarious design of the fascist to destroy the plurality and multiculturality which is the strength of the Indian society. 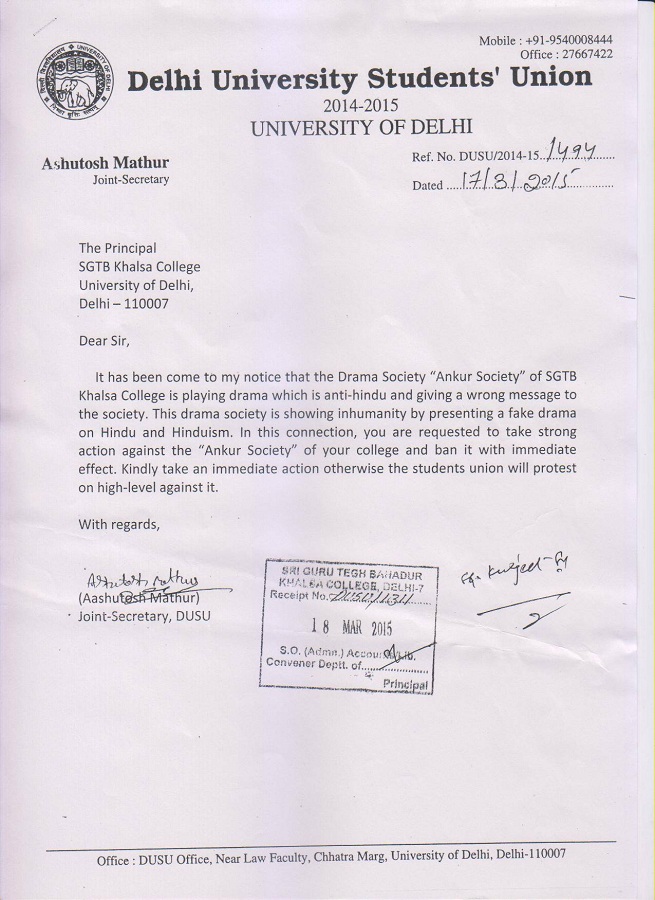 I believe that what troubles the issuers of this notice the most is that our play is very direct, it names the names. It says that there is no difference between the 2002 and the 1984 pogroms, to see them in the binaries of Congress and BJP is to be a part of the process of polarization. It names our leaders who propagated action-reaction theories. It names the foot-soldiers of the machinery of hate who coax women to become baby-making factories, who instigate people to rape dead Muslim women, who are hell bent on coloring history with their own agenda, who shout love-jihad and stifle our freedoms to express.

We have been constantly probing the nuances of communalism since 2012, and this year’s annual production has been performed at the National School of Drama, Connaught Place, and various other colleges of DU, 37 times since February 8th.

We are responsible students who understand how sensitive the issue of religion is in our country. To wrench out certain words from wider political contexts without any understanding of the same is a sign of ignorance. This threat to ban is a threat to the entire artist community who engage with their work politically, and it also highlights the ban-culture doing the rounds in our country.

This regressive idea to ban our theatre society is a threat to the democratic culture of Delhi University and points out to the shrinking spaces of creativity and access to public spaces to express the same.

I thoroughly condemn this Letter issued to us and call for solidarity from one and all. I also invite all of you to come see the play whenever we perform next.