[Pictures] A 16 Year Old Decided To Get Her Marriage Annulled, And The World Stands In Solidarity

“When I turned 16, I came to know that I had been married off as a child. But I don’t even remember that marriage, so I don’t want to honour it. I want it annulled.”

Price of Silence is standing up and out in the streets with our accomplices all over the world for Santadevi Meghwal who is fighting back against her arranged childhood marriage. 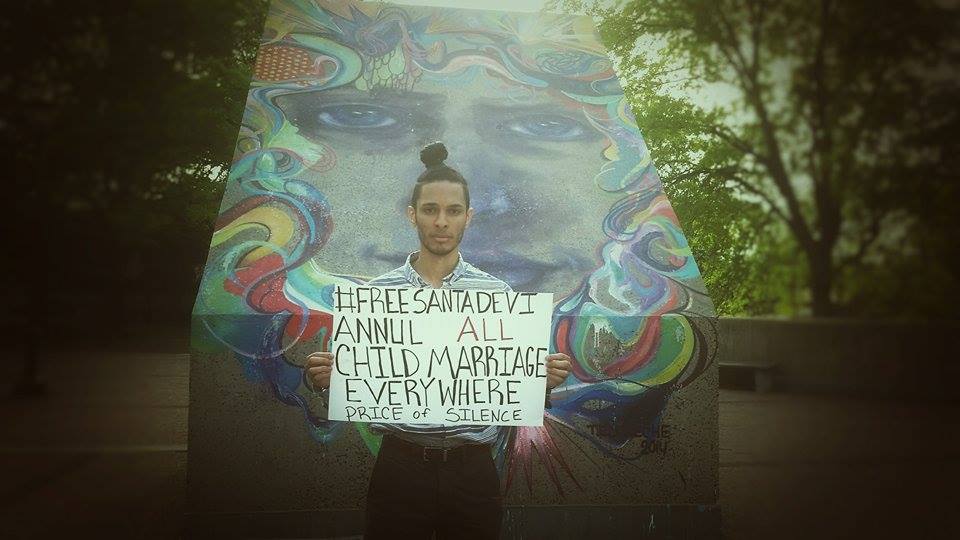 Our contemporary fight for equality and women’s rights isn’t being defined by fancy NGO’s, award ceremonies or social media, but by women all over the world matching the audacity to dream against the backdrop of systematic disrepute that demeans their potential and inherent respect. In the cause of equality, we must stand equal to the cause for those standing up for equality.

Few statements can live up to this bold courage to live out the colours of the innate spectrum of will and potential embedded in the ‘her’-storical DNA of women, as found in Santadevi’s cry to break free. This fearless response to the precept of enmity and court restrictions to her action to stand up, speak up and fight to annul a marriage arranged for her when she was 11-months-old, is the echoing amber of women’s history.

“When I renounced this marriage, my so-called husband, Sanwalaram, started stalking me and threatening to take me away forcibly,” Santadevi said. “At first, I was scared as my parents were not with me. But, the more pressure they put, the more determined I got to break free…”

Today, Price of Silence and our accomplices, 16 December Kranti Official, Feminism in India in Delhi, and #FemPositive in Mumbai are launching our pictorial campaign in respect to Santadevi’s fight for justice. 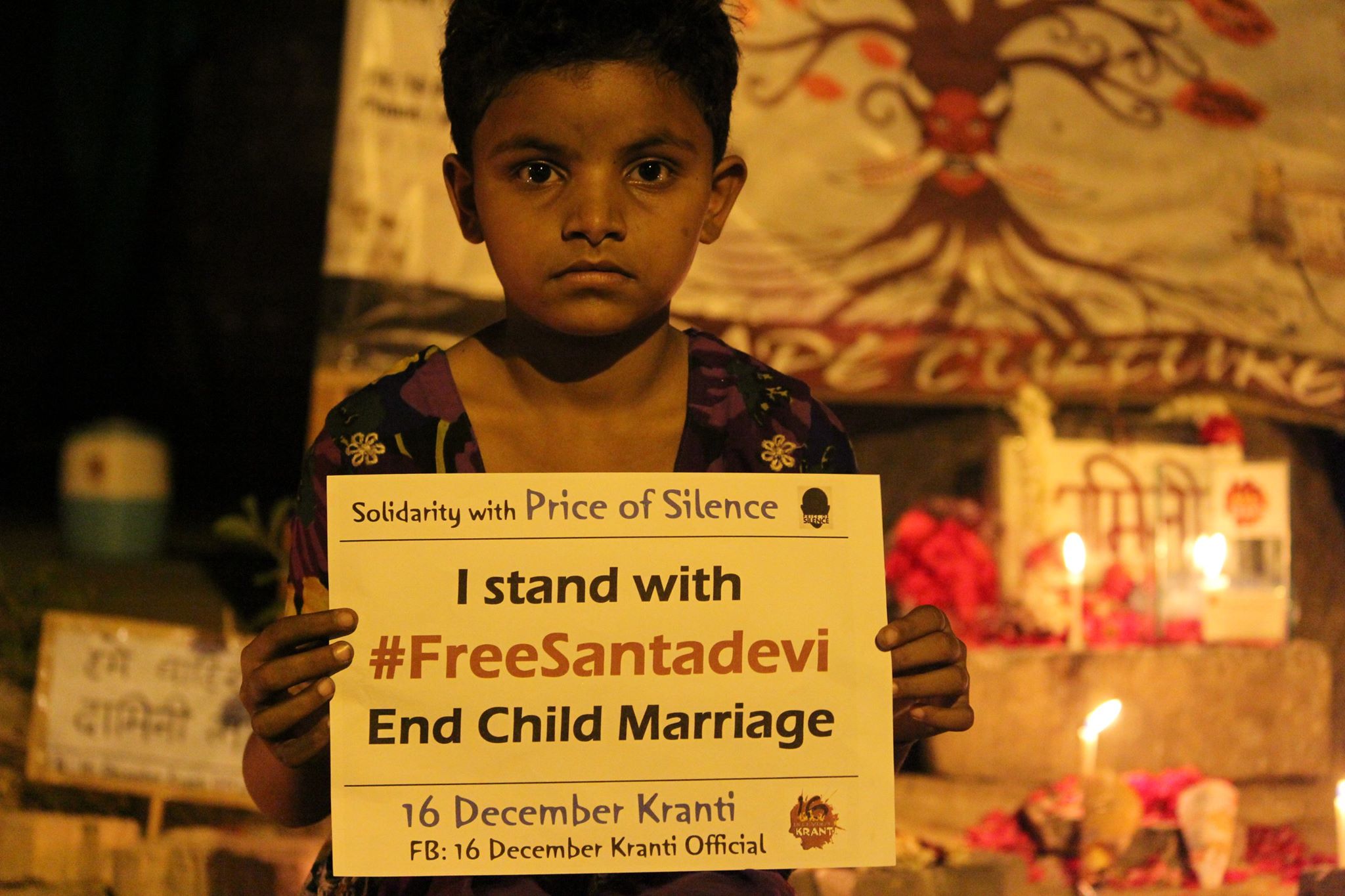 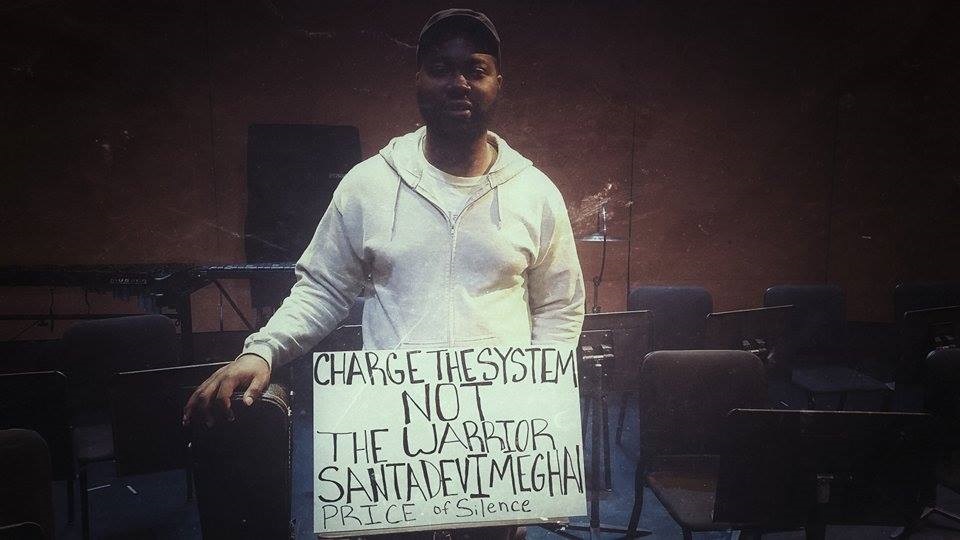 We are collecting pictures of activists and activated people around the world holding up signs in the streets with messages in solidarity with Santadevi and the cause of annulling all child marriages. We are standing on a platform built by the bravery of Santadevi to demand support from the court in her district to take action to end marriages arranged during childhood without any fine or prospect of violence against the survivor. Just as important, we are calling on the central government to take action where support in courts yields to the custom of demeaning women’s lives as instruments to the maelstrom of the largest human rights conflict in the world in the from of childhood and forced marriage. 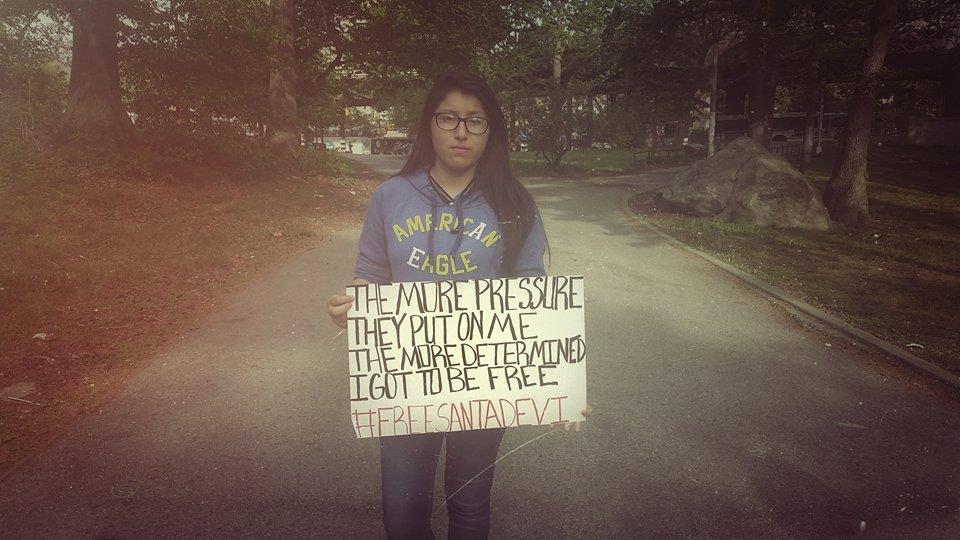 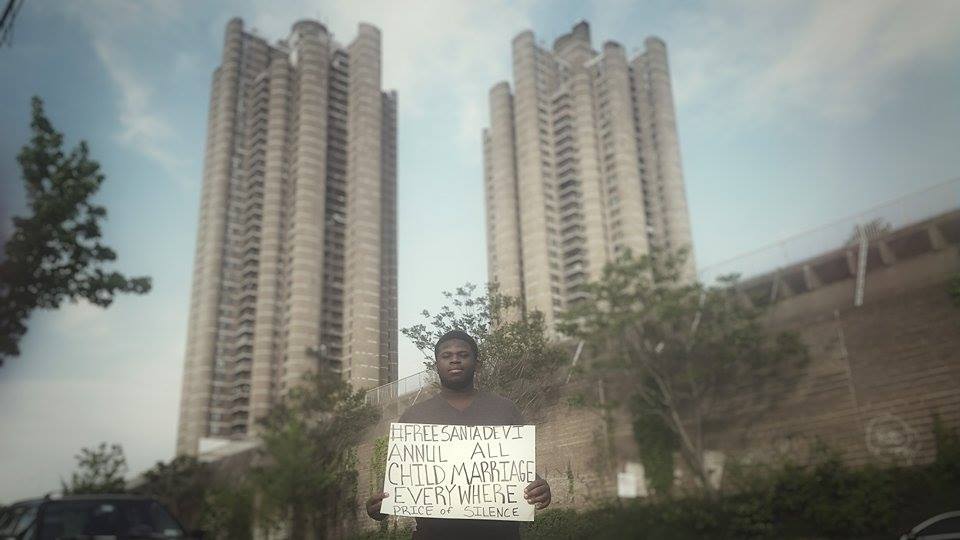 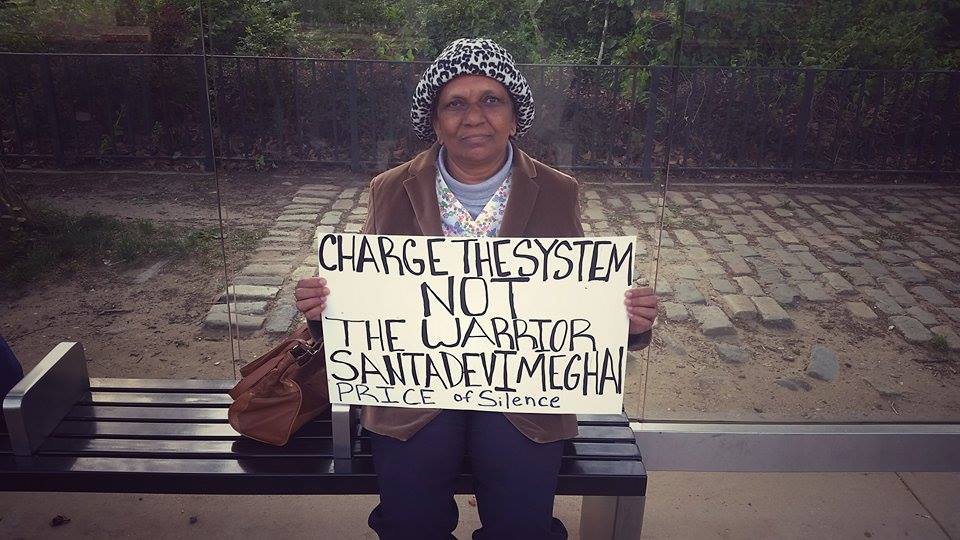 We will deliver these pictures, alongside articles and petitions to Indian consulates and the Central Government demanding that Santadevi’s protection is guaranteed, her fine and marriage are annulled by her own consent alone, and that this case be a step, a giant leap, in stepping up mechanisms to protect children, aide women in leaving marriages arranged against their will, or before their age of consent. 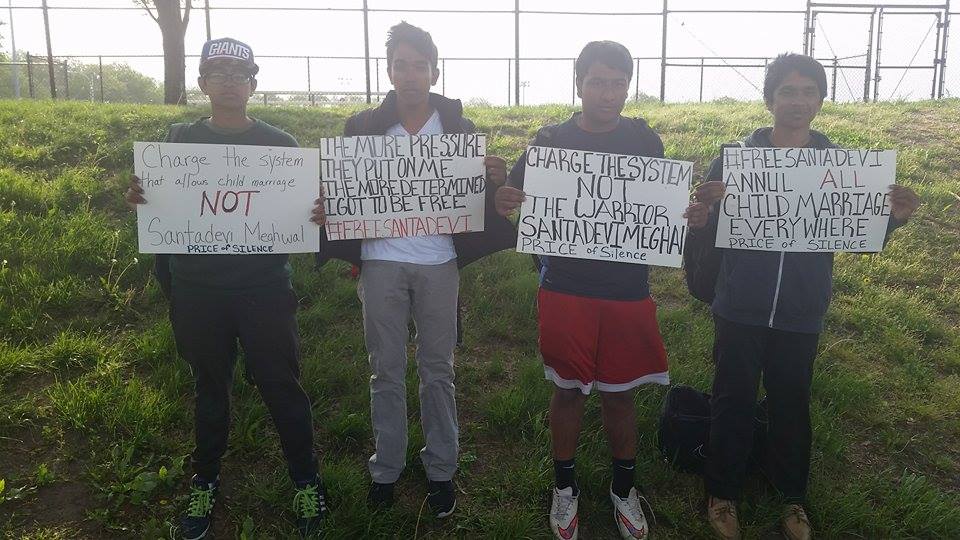 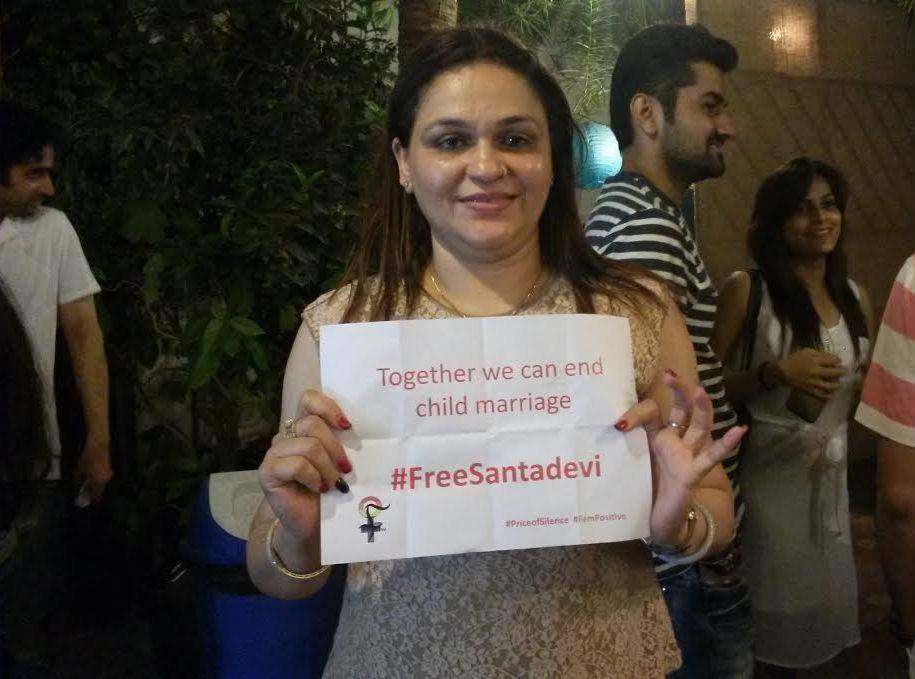 “I want to study further and become a teacher…”
-Santadevi Meghwal 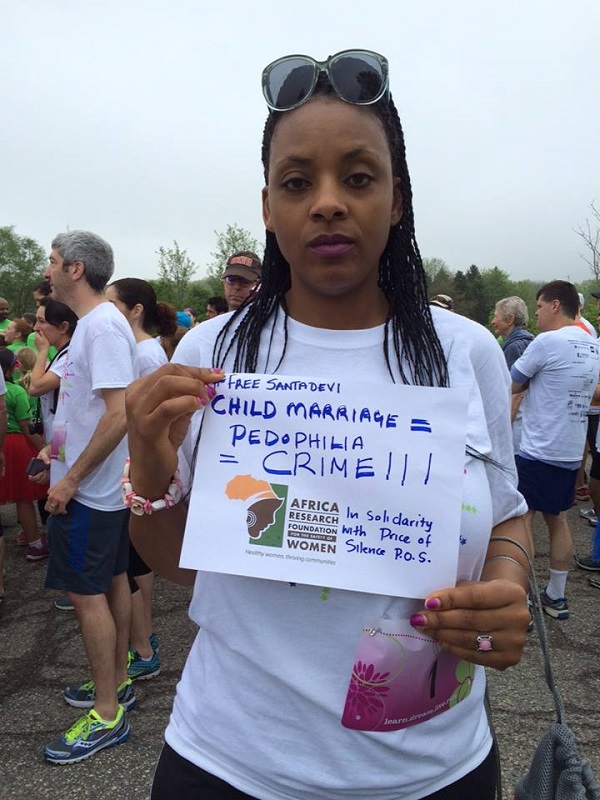 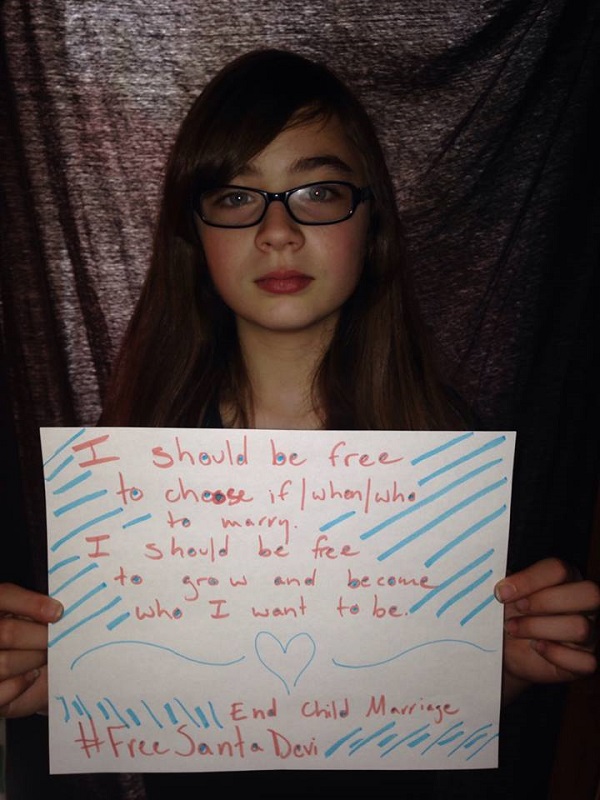 Join us in action by sending your photos with the #FreeSantadevi and/or #Breakfree tags to pos.theatre@gmail.com