Transgender Identities: Powerful And Noble In History, Marginalised In Reality

I am a Bengali woman; a Hindu; an Indian and the list goes on. So what really is my identity? Knowing the irreducibility of beings, can we then speak of people having one fixed identity?

When we speak of transgender identity in particular, the subject positions are equally fluid and changing. For whether one chooses a masculine or feminine or a combined sexual identity is contextual, and what is most comfortable for the subject in question. Moreover, if we take out some time to reflect these shifting positions from masculinity to femininity and vice versa, it is not restricted to the transgender community only, but gets expressed in subtle ways in the heterosexual lives thought of as natural by many. For example, when we look at a simple enough phenomenon of cooking, how do we determine it as masculine or feminine? We often hear how the world’s leading chefs are men while home-made cooking or cooking for the family is usually, though not always, associated with women. In other words, the simple act of cooking is both feminine as well as masculine; what changes is the context and the subject position. 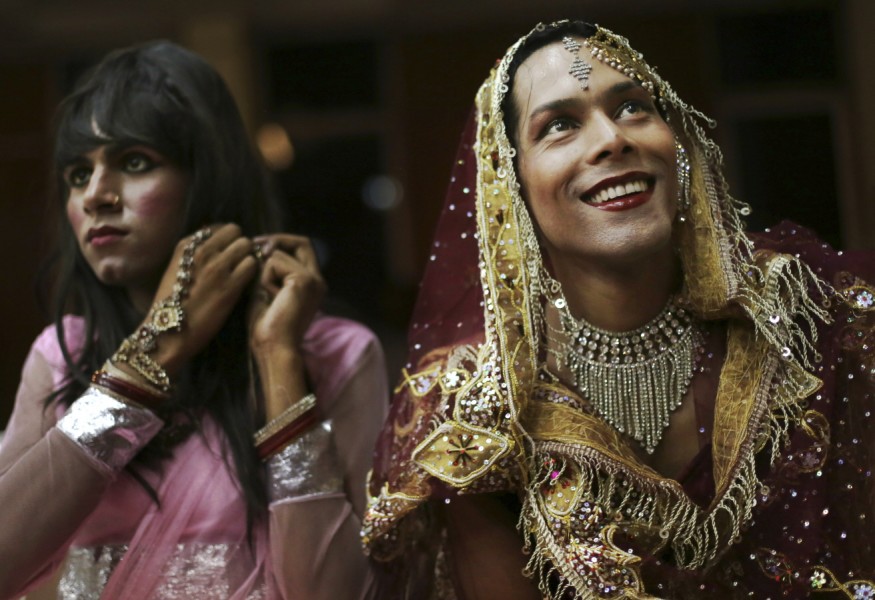 Religion is one of the other simple and everyday acts of life and its relation with sexuality is as complex as the relation that exists between the multiple factors that shape identities through which identities are derived. While there is much currency to the thought that anything other than heterosexuality is against the order of nature amongst a set of staunch believers, mythological accounts seem to counter these claims especially through strong transgender characters symbolising power, devotion and bravery.

So how has mythology captured this fluidity of identities with relation to transgender characters? One can recall the tale of Agdistis, said to be born a hermaphrodite or a double-gendered being, was castrated by the Greek god Zeus. The myth goes that the dual character of Agdistis was thought of as threatening by the Greek pantheon; and thus, Cybele, the goddess of nature and fertility was created. Similarly, one can remember tale from our childhood about the warrior Shikandi, who became Bhisma’s foil at Kurukshetra.

There are special rituals amongst the Hindu folk involving the transgenders. For example, Tamil Nadu has a long tradition of their village deity – Aravan or Kootnadavar, which is as special ritual practiced by transgenders in a festival that re-enacts the mythological tale of Aravan. According to the ritual, the first evening of the pilgrimage signifies marriage to Aravan, wherein the god is well-adorned and the devotees are tied thalis by the temple priest. Many of them are dressed like women during this time. The next morning these devotees take to widowhood once the head of their Aravan is cut. They break their bangles, remove their vermillion mark and dress in white.

Even the native American myth about two-spirits, who are people with both masculine and feminine identities are said to have enjoyed equal, if not more privileged status as compared to single-gender identities.

Historical accounts speak of eunuchs in the Mughal court, who were delegated the task of disciplining the harems of the emperors. They were mostly brought from Asia and Africa and were valuable to the emperor for reasons more than being mere managers of their pleasure drives. In fact, they were consulted for political advice and also served as informants to the royalty.

It is indeed curious that even though mythological and historical accounts portray the double-gender or transgender identity as powerful and noble, in reality they are live a life of acute marginalisation. It is only in the 21st century that we hear of the first transgender Principal, Dr. Manabi Bandyopadhyay, in the country. In fact it is only last year that the third gender was included as a category in the electoral rolls just before the iconic 16th Lok Sabha elections. Also, Census data before 2011 did not recognise the existence of the third gender. The recent developments have certainly been encouraging. But the struggle for survival is more than mere recognition and it is here that the provisions fall short. Lack of employment opportunities means that there is concentration of transgender people in the limited work opportunity available to them, i.e. begging and sex work, both of which bespeak the acute vulnerability and marginalisation the community faces as a whole. Equal rights, respect and opportunities seem to be a far-fetched dream still for half a million people who belong to the community.