By IndiaSpend in Politics

Decide your neighbourhood priorities, instead of leaving it to the government.

With that thought in mind, Delhi’s Deputy Chief Minister Manish Sisodia announced Rs 253 crore for a Swaraj (self-rule) fund. That is in tune with the way the first full budget of the Aam Aadmi Party (AAP) government was prepared.

There was “an overwhelming response” to Chief Minister Arvind Kejriwal’s appeal for public suggestions in creating the budget, Sisodia said in his June 25 budget speech. More than 1,500 were received after “extensive consultations” at public meetings, discussions with resident associations, NGOs and companies.

Education and health are clearly priorities for the controversy-prone government of India’s richest state, aware that both subjects are priorities for voters.

In a state with 86% literacy—the national average is 74%—and a strong family focus on schooling and jobs, Sisodia doubled the plan outlay on education to Rs 4,570 crore from Rs 2,219 crore in the previous year.

Some of the education proposals include:

Sisodia also announced subsidies for new buyers of battery-operated four-wheelers and two-wheelers, and a fixed subsidy of Rs 15,000 to battery-operated rickshaw owners for promoting eco-friendly transport in Delhi. 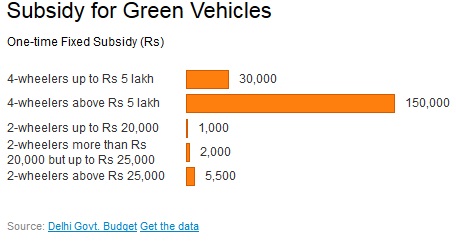 Sisodia, as IndiaSpend reported earlier, said Delhi would have received Rs 25,000 crore had it been included in the 14th Finance Commission recommendations.

“The Fourteenth Central Finance Commission has recommended increased devolution of central taxes to states from 32% to 42%. Delhi being excluded from the terms of reference of the Finance Commission is deprived of the benefit from this recommendation, although Delhi has a separate consolidated fund like other states and all financial transactions of the Government are met from its own resources. Had this recommendation been applied to Delhi, then Delhi would have received approximately Rs 25,000 crore during the award period (2015-20),” Sisodia said.

The estimated receipts are Rs 41,500 crore while proposed expenditure is Rs 41,129 crore with a surplus of Rs 371 crore. 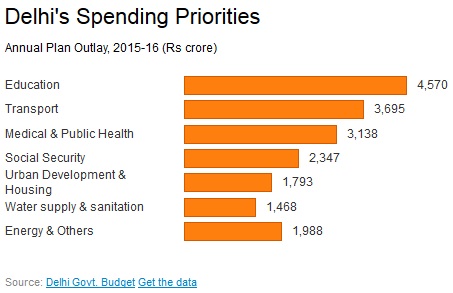 Delhi has some of India’s best development indicators: a per capita income (at current prices) of Rs 2.41 lakh, almost three times the national per capita income of Rs 87,748, according to the Economic Survey presented last week; more than 97% of Delhi’s population lives in urban areas, according to census 2011; and the sex ratio (number of females per 1,000 males) of the state has improved to 868 in 2011 from 821 in 2001.

UAPA, NSA, and Sedition: The Three Pillars Of Stifling Dissent In India