The Khans Do Not Rule Bollywood, Upper Caste Hindu Actors Do

By shinjinidb in Media, Society

When The Hindu came out with a survey regarding the lack of diversity in Bollywood movies, it opened up a debate on the layers of discrimination that are inherent in the Indian cinema industry. According to the analysis, in the 300 movies made in the last two years, only 6 characters belonged to marginalized communities.

If we were to chart the entire history of Indian cinema, we would see a growth in commercial ambitions over art. Indian cinema in its early years attempted to reform and bring together a fragmented society after independence. Movies used to mostly revolve around the downtrodden, and aimed to reform a strictly hierarchical society. But one look at contemporary movies will tell you how far we have come from there.

Popular Bollywood movies most frequently tell the story of an upper caste Hindu character, according to The Hindu. In 2014, around 66 movies had Hindu lead characters while movies that had characters from other communities were at a dismal one digit ratio. 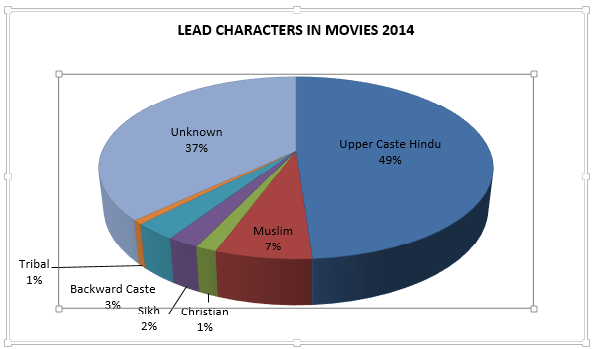 Even though Bollywood is said to be ruled by the Khans, it is ironic how most of the roles on screen actually go to the upper class and upper caste Hindu community. Most leading actors come from a privileged background and most of the characters they represent in mainstream movies belong to the same faction. Very rarely do we come across a character in a movie from a socially marginalized background.

The idea that a quintessential Bollywood hero fights social evils like corruption, helps the poor, fights the villains, romances his heroines, is an epitome of Indian masculinity and prowess – is at the same time only conferred to an upper caste/class, mostly Hindu alpha male. What this seems to exhibit is the idea that heroism can only come from a particular social background.

Traditionally, the rags-to-riches story worked for Bollywood. The hero fighting his way up in the class system corresponds well with the rise of capitalism in India. But imagining the same hero fight the caste system was perhaps too uncomfortable a reality to portray on screen.

The lack of diversity in mainstream Bollywood movies can be further elucidated by the fact that there has hardly been any movie featuring a tribal in the capacity of lead hero/heroine. Mary Kom (2014) was the only mainstream Hindi movie featuring the real life story of a tribal woman who becomes a boxing champion.

One might argue that there has been a representation of these social evils in movies but it is important to focus on the question- why is there bias in portraying a leading character from a minority community?

To say that movies are just a source of entertainment is to underestimate the power of this form of art. The art of storytelling lies in the way it translates the realities of the time in a creative fashion. Cinema is what you make of it. It can entertain, educate and engage the audience beyond the visual medium. The purpose of watching cinema is subjective and some may argue that it shouldn’t be taken at face-value. Yes, cinema is supposed to be for entertainment, but at the expense of what? Non-representation is also a form of discrimination.

Although Indian cinema has changed, there is still much work to be done. Unlike Hollywood, which has been, desperately, opening its gates to diversity and representation, Bollywood is still struggling with that representation. In recent years, debates surrounding this lack of diversity have made way for niche filmmakers to question social taboos through their movies. And it’s high time they challenged the dominant caste narrative though powerful and subversive cinema.