On #WorldPhotographyDay, Captured: Tikam Chand And His Magic Box, The Last Of Its Kind

By Kshitij Nagar in Culture-Vulture

Before cell phones became capable photographic devices, before digital cameras became affordable, before cheap film cameras became available, and before Polaroid’s became popular, it was a completely different world than what it is today. Today we take photographs and photography for granted. It is a means of instant gratification, just a press of a button, and an image appears on our screen, ready to be sent half way across the world in a matter of seconds. What we do forget is that there was a time, when it was not so. Photography was out of the reach of most common people. Having a photograph made of oneself was a very special occasion, and would happen perhaps only once or twice in a lifetime for most people.

I talk of the 60’s,70’s and 80’s. Popular tourist spots such as Chandani Chowk, and Birla Mandir in Delhi would be filled with Street Portrait photographers. They would make images of common folk, of families, and of individuals both young and old. Most could not afford to go to a photo studio at that point in time. These photographers did, what today I would like to call as the most important documentation of our country and its citizens.
They would make images such as the one below of my great-great grand mother when she decided to visit the Birla Mandir in Delhi along with her family. 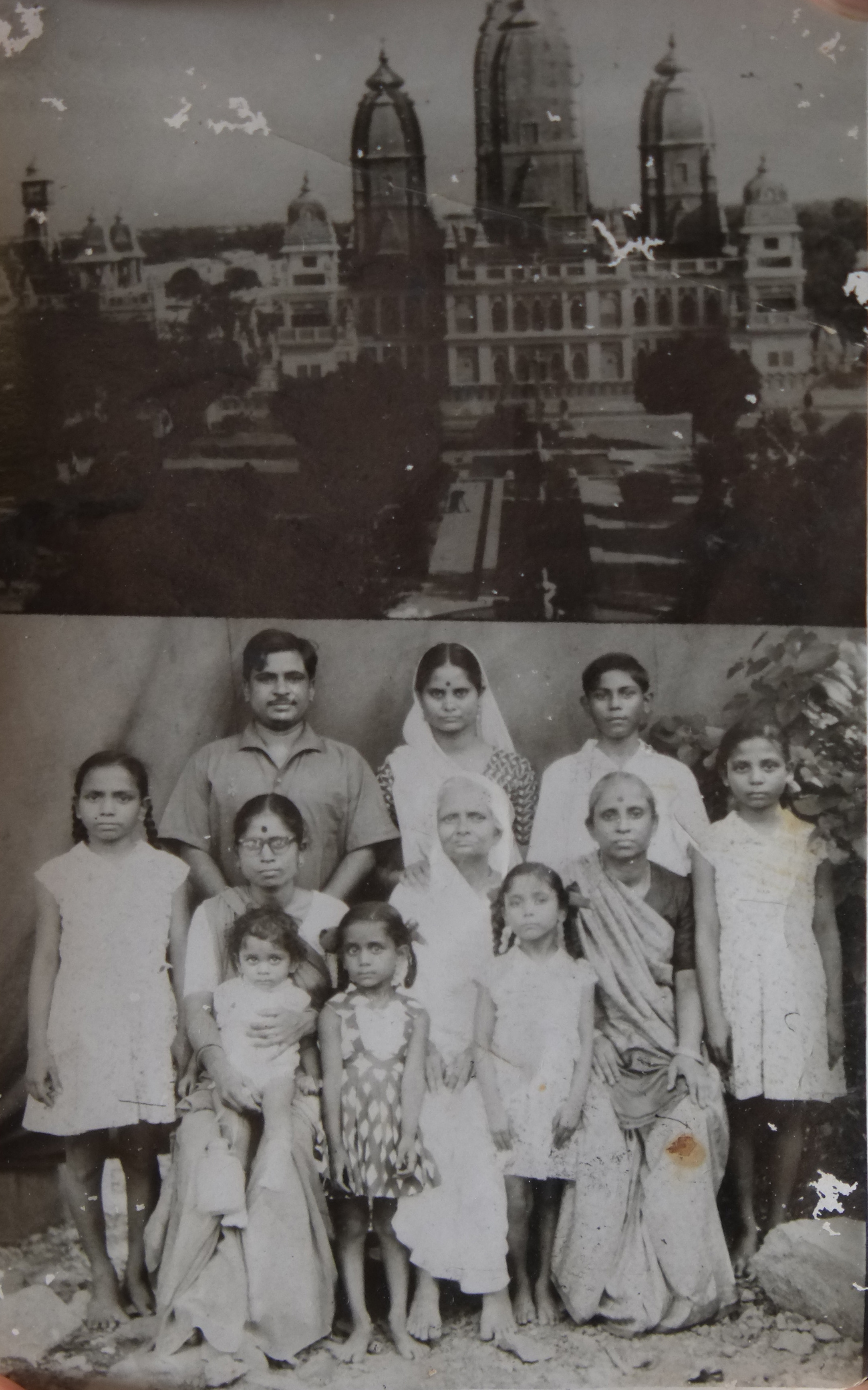 Photos like this were, necessary, as they were almost a cause of celebration in itself for most middle class families. They began to disappear in the mid 90’s as business became poor. Photographs had become more affordable. You could visit your neighbourhood studio to have a quick passport photo made using an Instant Polaroid camera. The process was much quicker, and you would get a colour photograph, unlike what the minute camera would provide.

To the best of my knowledge, Tikam Chand in Jaipur, is the last practicing street portraitist in our country today. He is the third generation that is taking the family profession forward. It is a profession that his family has sustained for 95 years. 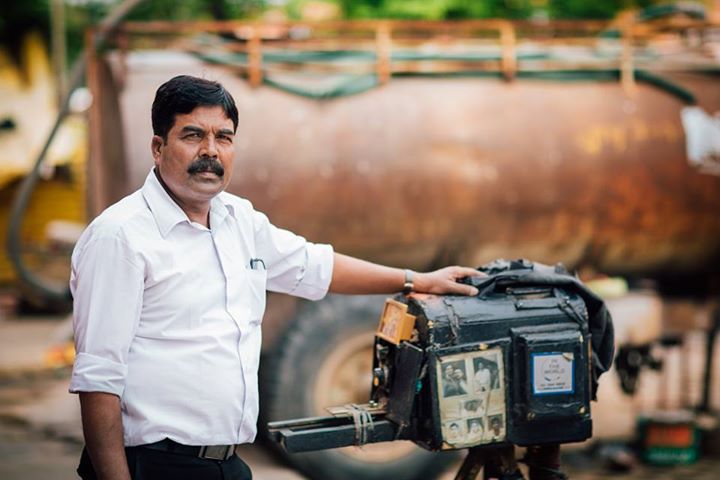 He sits, in a permanent place in front of the famous Hawa Mahal. The following is my short conversation with him. (It is produced as is, barring a few translations.)
“My grandfather, Mr. Pahadi Lal ji started this. He was the official photographer of the Maharaja of Jaipur. He practiced it for 50 years. My father took over from him, and I took over from my father in 1977. I’ve been doing it ever since.”

He continues, “Earlier people used to come to us for many reasons. We would make photos in two different sizes. We made a smaller passport size for day to day activities such as for government applications, school admission, tax return, registry of house or for small loans that people would take. Anywhere or everywhere, a photograph could be used. We would also make a larger 2B size or Postcard size photograph when people came to us on special occasions. People would come to us for raksha bandha, teej, or eid or on their birthdays.”

Like any other street portraitists of the time, he uses a special process called the “minute camera”. It is a special wooden camera, with the camera in front, and the processing area just behind it.

“Yeh ek poora camera hai, photo bhi iss he mein banti hai, aur processing bhi iss he mein hoti hai.” (This is a complete camera in it self. The photograph and the developing happens inside it.)

His camera is very old, its about 154 years old, manufactured sometime in the 1860’s. It has a lens manufactured by Carl Zeiss in Germany. Tikam takes care of all the repairs on his own. 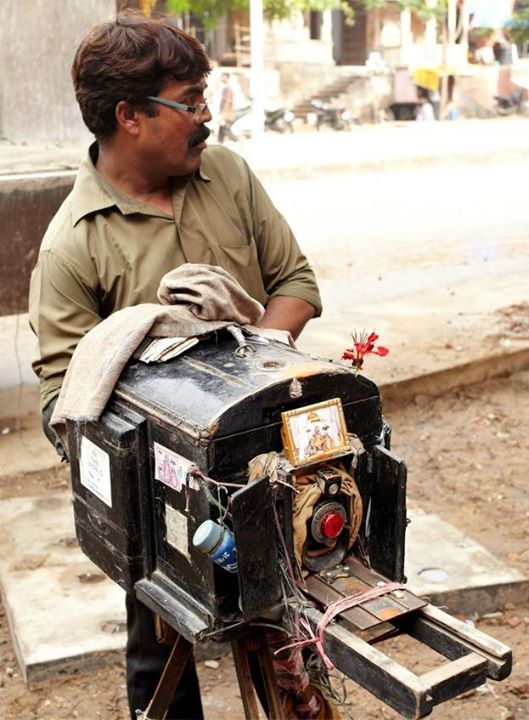 Tikam Chand, carries on his tradition as it is. Earlier, due to limitations of the chemistry, only black and white photos were possible, photographers would then hand paint the colours. He carries on this practice still. It is not only the hand colouring that these photographers are famous for, but also for the practice of adding “special effects” by clever use of backdrops and cutouts and then making it look realistic with the clever use of perspective, to make it look realistic.

Having your image taking, while receiving blessings from god was a popular style- 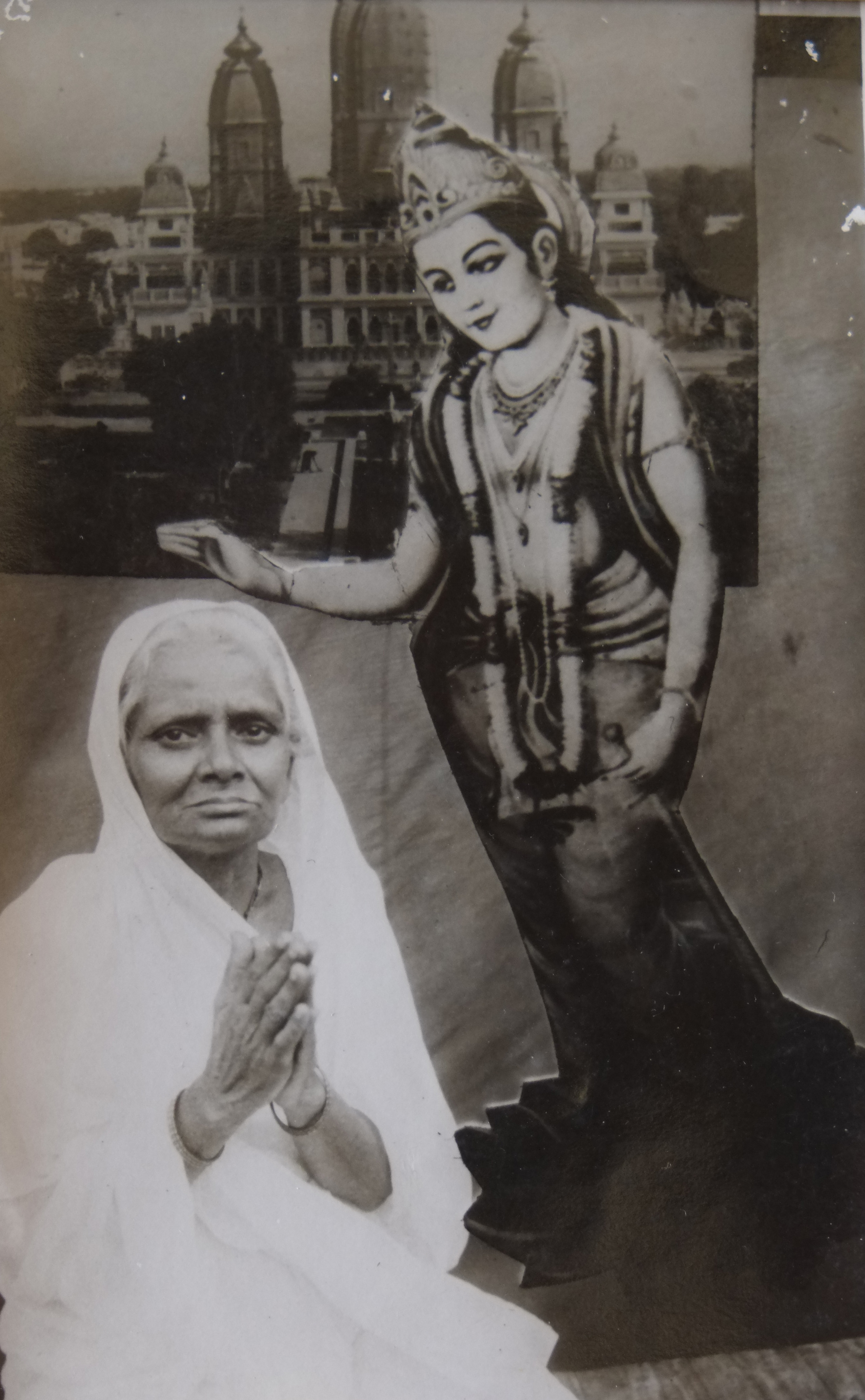 Tikam elaborates “other popular styles were, a circular image, or having your self photographed with the illusion on sitting on a crescent moon, or in an open top jeep.” He continues, “sometimes we would also get requests of adding a Mahal to the background, to make it look as if they owned it.”
“Hum logon ki saari ichchayein poori karte hain.” (We fulfil everybody’s wish who comes to us.)
He continues “we would also do funny things such as adding hair to a bald person, or a moustache to a young boy.”
“Humare liye koi request choti badi nahi hoti.” (No request is small for us.)
For a younger audience, brought up on Photoshop, Instagram filters and “cartoonify” apps, this may seem “normal”. What needs to be understood is, that all of this was done by hand, either by clever placement of props or by tediously sandwiching negatives together to get the desired look. The results are surprisingly realistic.
“Sepia tone was the most common. We achieved this by adding black salt (kala namak) to our final print.” Tikam says. 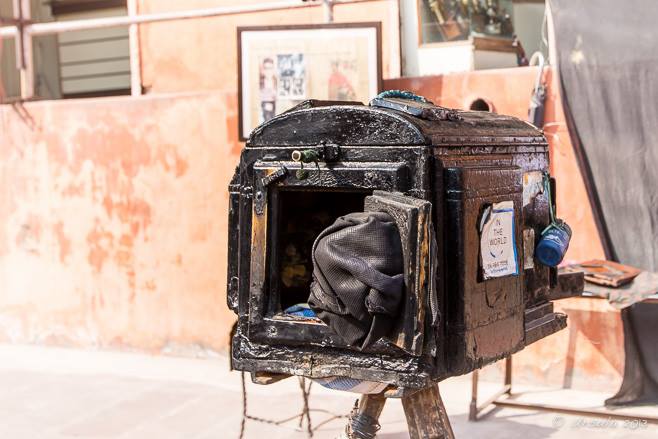 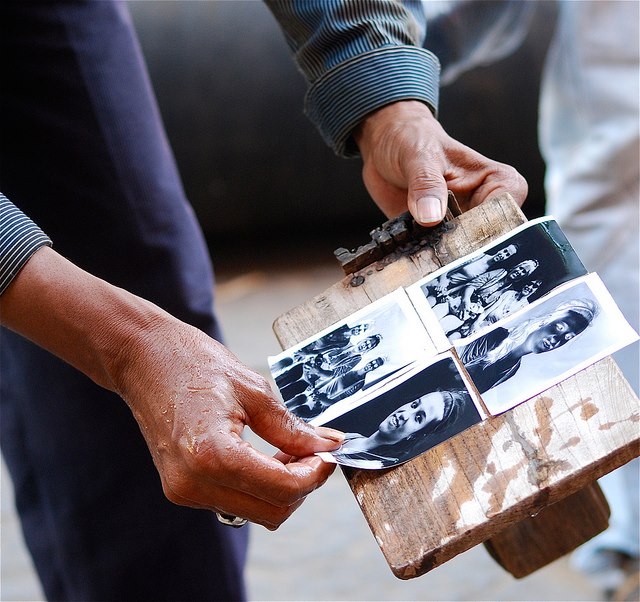 On changes in camera techniques, he elaborates, “I have seen 3 major changes in my life in photographic technology, first was pinhole camera, second was cut film, and the third is now digital.”

He laughs in anticipation of my question, “So what do you think of digital?”

“Its good, but it doesn’t show what my camera can show. It does not have the beauty or the same skin tones or tones in the hair. Aap dono ko barabar rakh ke dekhiye. (Compare both of them side by side.)”
“Doosri baat, digital mein, mein apni photo ko apne haath mein pakad he nahi paata!” (Secondly, with digital, I am never able to hold my own photograph in my hand!)

In characteristic Rajasthani fashion of carrying on the tradition through ages, Tikam is now also training his sons to use the camera. “I am training them, whether they carry it forward or not, it is up to them. For me, this art should live on in my lifetime and their lifetime. If somebody asks them questions about the camera or the process, they should be able to answer.”

Tikam also has a Facebook page, that is run by his sons. While he gets good reactions from people who visit him, business is not the same as it used to be. “Log aate hai, shaabashi dete hai isse zinda rakhne ke liye. Purane log, naye ladke ladkiyan aur foreigners bhi sab pasand karte hai.” (People come and they appreciate me for keeping this alive. Old and young, and even foreigners, all seem to like it) 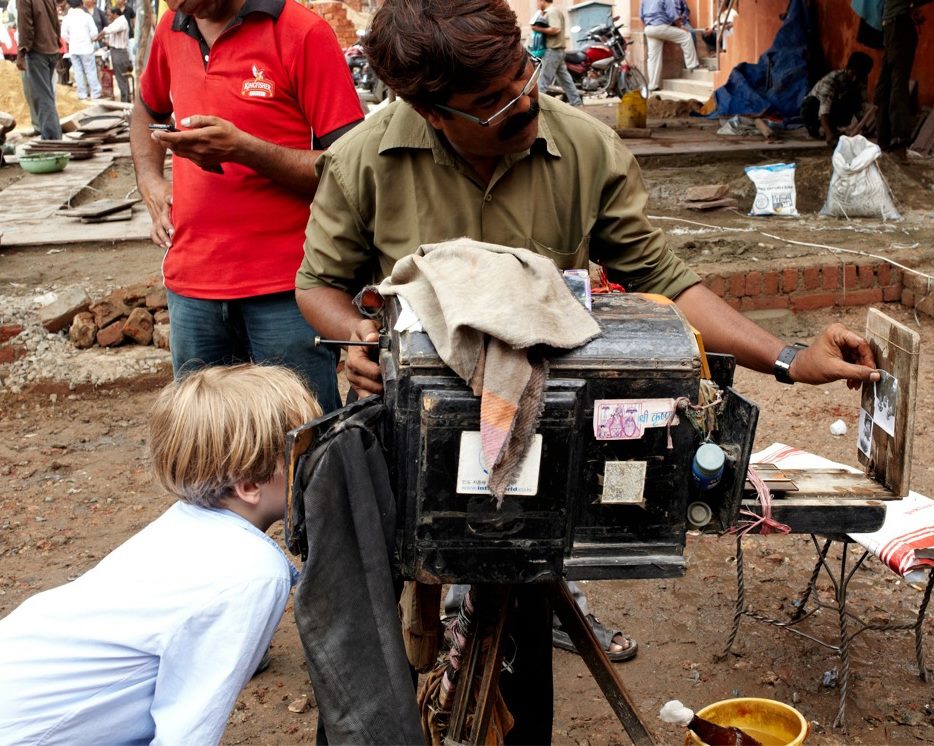 He’s made a few cameo appearances in movies too! 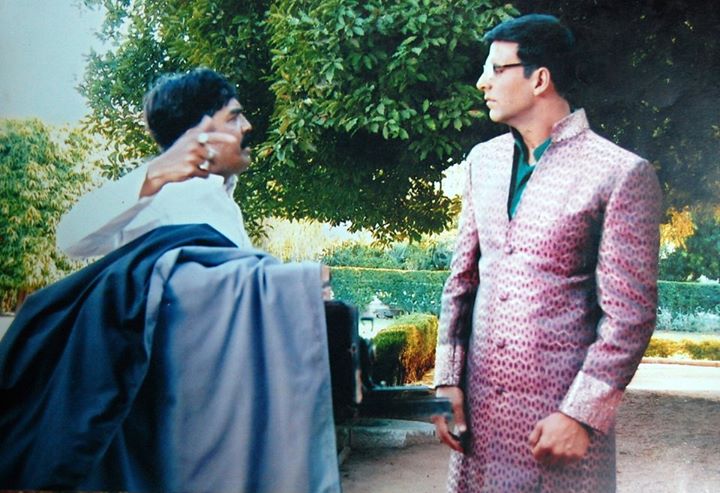 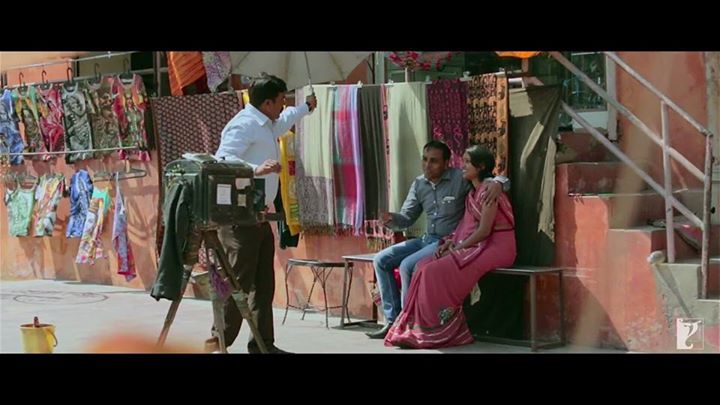 Finding, regular new customers as well as photographic materials such as papers and chemicals. But as a parting comment he promises with a smile “mujh se jab tak ho sakega, mein karunga” (I will keep continuing this forward, for as long as possible for me)
—-
This World Photography Day, pledge to help Tikam Chand keep his tradition alive. If you visit Jaipur, show your support by having your portrait made!