Clean Sweeps And Surprise Wins: What The DUSU And JNUSU Election Results Reveal

With the inception of challenging rival powers this year, the penetration of a new wave of politics into the realm of education was anticipated in Delhi University Students’ Union (DUSU) election results. However, the results signify unscathed conformity to more than a decade old established supremacy of the twin superpowers, Akhil Bhartiya Vidyarthi Parishad (ABVP)and National Students Union of India (NSUI).

The DUSU election result jolted the thriving confidence of rivals Chhatra Yuva Sangharsh Samiti (CYSS) and All India Students Association (AISA) as ABVP, BJP’S student wing achieved a clean sweep by bagging all four positions with a margin of over 4,500 votes in each seat.

Candidates of the Congress’ National Students’ Union of India (NSUI) got the second highest number of votes for the posts of President, Secretary, and Joint Secretary. 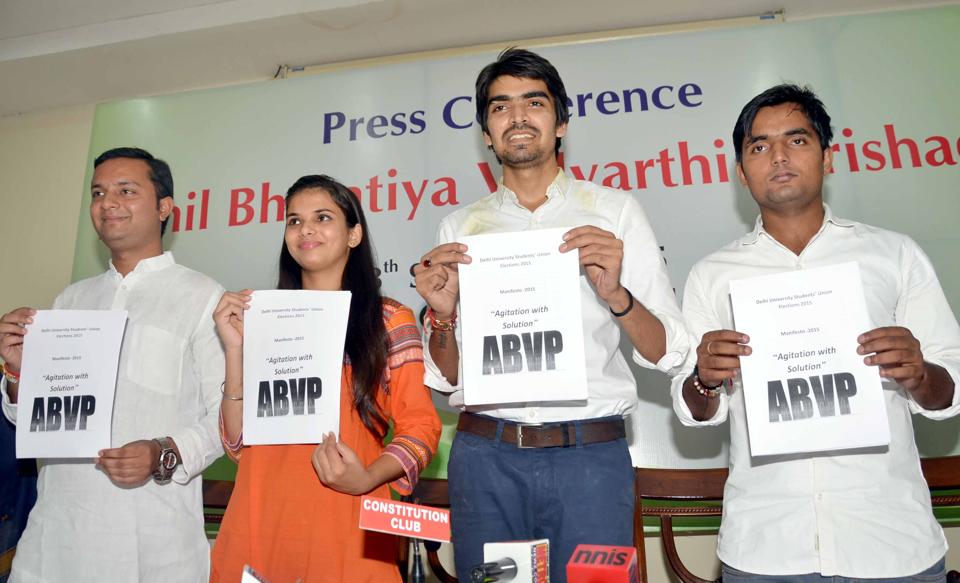 It seems like the efforts of CYSS received no recognition by University students and were restricted to banners only. The rock concert along with the promises of free Wi-Fi and the personal appeal of C.M. Arvind Kejriwal didn’t cajole them into being driven by a non-ideological alternative. The unanticipated and shocking defeat of the CYSS seems like there never was a third rival party. The emerging trend of a tripolar election this year seems like it was overblown than its actual existence. Despite its unexpected downfall, the CYSS managed to make a mark, with its candidate, Garima Rana for the Vice President’s post getting the second highest number of votes.

Newly-elected DUSU President Satender Awana, who secured 20,439 votes, defeated NSUI’s Pradeep Vijayran by a margin of more than 6,000 votes. ABVP’s Sunny Dedha won the Vice President’s post with 19,671 votes, defeating CYSS’s Garima Rana by over 7,000 votes. ABVP’s Anjali Rana and Chhattarpal Yadav also defeated their rivals, NSUI’s Amit Sehrawat and Deepak Choudhary for the posts of Secretary and Joint Secretary by a margin of more than 4,000 and 6,000 votes respectively.

Left-leaning All India Students’ Association (AISA) had made a significant comeback with expanding its support base last year. However, the outfit saw a dip in its vote share this year, with only its candidate for Joint Secretary’s post coming in the third place, with 10,045 votes.

The Assorted Political Wave In JNUSU

Left-backed All India Students Association (AISA) which swept the polls for last two years lost the post of President by a margin of 67 votes and could manage only two seats, Vice President and General Secretary.

The All India Students Federation (AISF) opened its account at the JNUSU polls by winning the presidential post.
The right wing Akhil Bhartiya Vidyarthi Parisahad (ABVP) made a comeback in the JNUSU Central Panel after 14 years and clutched the Joint Secretary position by defeating the AISA candidate by a small margin of 28 votes. This has been an alarming resurgence particularly in JNUSU which has been under the stronghold of the left wing political outfits for years. The saffronisation of institutions has come up as a new emerging trend in JNUSU election this year.

Of Changes And Constants

Seeing the results of the DUSU elections, one can notice how a shift from a deeply rooted ideological political outfit has become nearly impossible over the decade. The ballyhoo about the DUSU elections retracting from a political system involving competition between the two superpowers ABVP and NSUI holds untrue since the support base established by them remains unscathed, with NSUI grabbing the second highest share of votes after ABVP. Academically, there is another important aspect upon which the election result sheds light.

The inefficient implementation of the Choice Based Credit System (CBCS) and the logistical and infrastructural problems associated with it have been given a chance for enhancement by a majority of students of the University by electing ABVP candidates as their representative. This then forces us to think about the referendum conducted by AISA on the CBCS where a great number of students demanded the rolling back of the system. The question of whether agenda or ideology influences the decision of electing remains unanswered.

The surprising comeback of ABVP after 14 years in a Left-dominated JNU has signalled the beginning of saffronisation of institutions. Both the election results are a sign of the increasing penetration of right wing political ideologies into the realm of education and that the wave of the right-leaning ideological national hero at the Centre has not dwindled.

This is a part of YKA’s focused coverage of the 2015 student union elections in Delhi University and Jawaharlal Nehru University. To know more about it, click here.

Tweet your comments, feedback and opinions on the election with #DelhiStudentsVote. We’ll make sure your voice doesn’t go unheard.