By Khabar Lahariya in Society

Editor’s Note: As part of Youth Ki Awaaz and Khabar Lahariya‘s collaboration, we bring to you this story from the hinterlands of the country’s largest state – Uttar Pradesh. Where was Lord Ram born? In Ayodhya that lies on the banks of the Ganga, or another Ayodhya in…Pakistan? 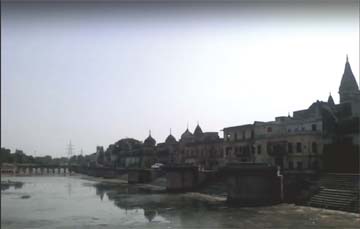 Faizabad District, Ayodhya town: Earlier this month, a fresh pinch of controversy was thrown into the Ayodhya pot. Abdul Rahim Quraishi, assistant general secretary and spokesperson of the All India Muslim Personal Law Board (AIMPLB), released a book in which he claimed that Ram’s birthplace was in a town in Pakistan and not in present-day Ayodhya. In his book, Facts of the Ayodhya Episode (Myth of Ram Janmabhoomi), Quraishi, drawing from research papers by Jassu Ram and the Archaeological Survey of India (ASI), reveals the presence of two Ayodhyas, both located in Pakistan’s North West Frontier Province. He says that Ram was actually born in Dera Ismail Khan district of Pakistan, in a town called Rahman Dheri, earlier called Ram Dheri. He challenges that nowhere in the Vedas and Puranas is it mentioned that Ram’s kingdom was in the Gangetic plain. Quraishi is also a key member of the committee formed by the AIMPLB to fight the on-going Babri Masjid case.

With the recent demise of Vishwa Hindu Parishad’s [president and leader of the Ram temple movement] Ashok Singhal on Tuesday, the rise of the extremist Pravin Togadia (International Working President), a prominent face of the VHP, trying to rekindle the demands of the temple construction at the Ramjanmabhoomi-Babri site is a concern. Ayodhya is a recurrent image in a corner of the national imagination, refracted through religion, politics and mythology. With this in mind, and the latest ‘dispute’ on the issue, KL reporters walked around the ghats and streets of Ayodhya to ask the people whose voices we seldom hear, what was their opinion on Quraishi’s claim.

From those who had traveled from towns in Bihar to immerse themselves in Ayodhya’s spiritual environs, to those who had set up businesses in its busy streets, our interviews overwhelmingly repeated platitudes about the unquestionable fact of Ayodhya as Ram’s birthplace. But as we ventured further from the ghats, into communities less interested and invested in the Ramayana or those more politically savvy, a refreshing hint of doubt and rationalism rang through (“Isn’t there an Ayodhya in Delhi too?”, “It’s one fact against the another fact – how do we know which is true?”) A train worth pursuing?

Watch this space as Khabar Lahariya reports from Ayodhya, in voices heard and less so.