If You Can Ignore The ‘History’ In Bajirao Mastani, Its Message On Love Is Quite Relevant

By Shruti Sonal in Culture-Vulture 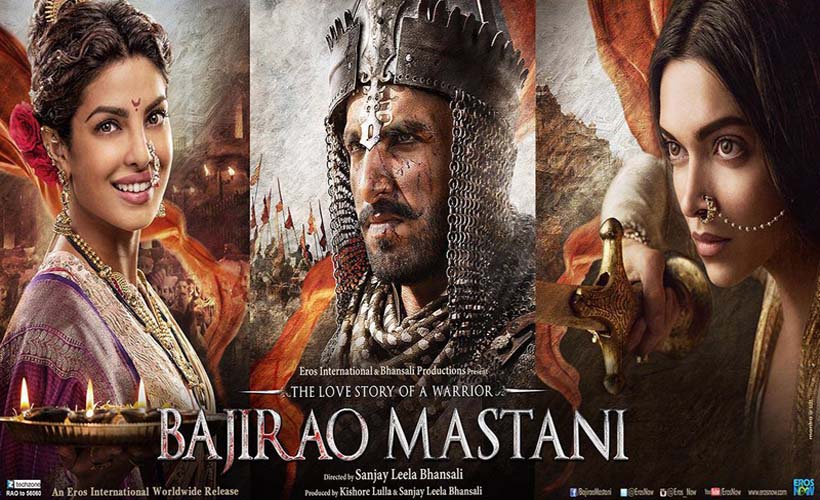 There are movies that preach and there are movies that entertain. Then there’s Bajirao Mastani that does both, leaving the theatre buzzing with claps and muffled sniffs in equal measure. No doubt, the movie has singled out and dramatised certain aspects of the Maratha warrior’s life and its historical accuracy will always be a subject of debate. However, the issues it touches upon and makes us think about are spot on.

Very rarely do we come across a historical narrative that feels like it was written for today. The movie, a labour of Sanjay Leela Bhansali’s love and vision, is a celebration of the love that transcended religious barriers and broke away from orthodox notions.

It is more than just the heroic saga of the legendary general Bajirao. It is much more than a tragic tale of unrequited love. It is as much about Mastani, brave enough to amalgamate two religions, yet never let them define her identity. It is as much about Kashibai, Bajirao’s first wife and the decisions she made, coming out of the shadow of her husband. But more than these individual characters, it is about ideas that remain relevant in every age – that of love, coexistence and peace.

At a time when history is being distorted and communalised, with kings and their actions being related to their religious identities, it is no surprise that the movie will offend some, especially those who have celebrated the Maratha empire as an opposition to ‘foreign Islamic rule’.

Bajirao, who played a key role in the expansion of the Maratha empire and has long been celebrated as the protector of the Hindus, fell in love with a half Muslim. At a point in the movie, when asked how can a fighter who slays Muslim kings fall in love with one of “them”, he replies that his enmity and battles are against particular kings for power, not the religion. When the Brahmans in the empire get offended and refuse to accept the child of Bajirao and Mastani (who Mastani named Krishna), he quite simply changed it to Samsher Bahadur. He made it abundantly clear that the grandeur of the Maratha empire or the battle against the Mughals and Nizams wouldn’t be weakened by the cross-religion love.

Mastani, born to Bundela Rajput clan Maharaja Chhatrasal and his Muslim wife Ruhaani Bai, was one who doesn’t hesitate to do namaz and name her son Krishna, is both gritty and defiant in her approach to secularism. She questions the association of certain colours with specific religions (saffron with Hinduism and green with Islam) and celebrates Eid and Brahmanic festivals with equal fervour. It’s interesting because she didn’t “convert” and retained her mixed identity.

The movie also questions the hypocrisy of notions of purity and “prashyachit” or atoning for your religious sins. Bajirao questions whether taking a half Muslim as a wife was a greater sin than the actions of those who kill in the name of religion. He attacked the notion of defending one’s “own people” even if they were on the wrong side.

It is a coincidence (or maybe not) that the story of Bajirao Mastani has been told at a time when issues of ‘love jihad’ and ‘honour killing’ dominate discussions. And no, we cannot get away by saying that “religion has nothing to do with it” anymore. If 300 years ago, Bajirao, despite his power and heroic prowess, could be made to face resistance by his own family and Brahmanic nobles of the empire and eventually give up the position of Peshwa, it is anybody’s guess what is the fate of cross-religious love in present times. While the Mastanis of today may not be chained and tortured, instances of honour killing continue to raise questions-will love ever really be allowed to transcend religious barriers?

As an audience watching this period movie today, either we can spend time in questioning its historical accuracy or sit back, and think about the chaos that surrounds us today. The message the movie gives is loud and clear in one of its dialogues- “Har mazhab pyaar karna seekhata hai par pyaar ka koi mazhab nahi hota. Woh toh khud mein ek mazhab hai.” (Every religion preaches love, but love itself belongs to no religion. It is a belief in itself.)