2015: Your Guide To Hindus, Muslims, Communal Violence And Intolerance 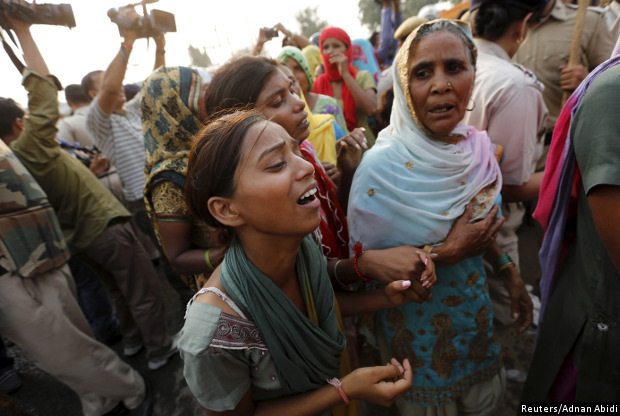 What was the intolerance debate that roiled India this year about?

* Was it about the ruling Bharatiya Janata Party (BJP) leaders–and Hindu villagers— declaring that a 50-year-old Muslim lynched to death on suspicion of eating beef deserved it?

* Was it about the Shiv Sena–one half of the ruling alliance in India’s most industrialised state – demanding that the voting rights of Muslims be revoked?

* Was it about actor Aamir Khan–and other actors, mostly Muslim–being attacked (he defended himself here) for remarks on intolerance?

It was unlikely that Indian Muslims could ever outnumber Hindus, Factchecker.in reported, quoting an Indian Institute of Population Studies report that said: “One could say that the Muslim population share is expected to rise from the current level but not expected to be much above 20 percent by the end of the century.”

Even with below-replacement fertility, India’s Hindu population will grow

This is what Shiv Sena president Uddhav Thackeray Shiv Sena said in an editorial in party mouthpiece, Samna: “In the near future, the Muslim population of India will exceed the number of Muslims in Indonesia and Pakistan, which will result in a cultural and social imbalance of the Hindu nation.”

However, PEW, a global research organisation, said in this report that Hindus are younger, on average, than the global population. “So, combined with an increase in life expectancy, the Hindu population will rise even with below-replacement fertility,” the report said.

A fifth of all religious conflict reported from Uttar Pradesh

The intolerance debate heightened in 2015, when over 50 authors and artists returned government awards, saying not enough was being done to control intolerance.

A trickle of returned awards turned into a tide when Mohammad Akhlaq was lynched in Bisara village in Uttar Pradesh, India’s most-populous state, which accounted for a fifth of all religious conflict nationwide between 2010 and 2014, IndiaSpend reported.

India has witnessed more than 3,400 communal incidents over the last five years; 529 people died and 10,344 were injured. But the data depended on which arm of the home ministry released it.

The home ministry and National Crime Records Bureau, a department under the ministry, published differing data for communal riots in 2014.

So, much attention is focussed on whether such riots have increased or decreased since Narendra Modi took over as Prime Minister in May 2014, IndiaSpend reported.