Over the last fifty days, the movement has spread across various spaces of higher education, throwing up questions about how we think about education and research: questions of inclusion and accessibility; questions about the social and political functions of research; questions about whether education should be understood as a right, or a commodity, or even wage work. These questions require careful consideration, but it has always been clear to me that one has to begin from a sensitive appraisal of the experiences of those living and working within educational spaces – instead, administrations continue to dismiss and violently repress struggles within such spaces.

On 9 December, a march to the Parliament had been organised under the banner of Occupy UGC, to demand the unequivocal restoration of the non-Net fellowship for all students and that the Indian government should withdraw from negotiations with WTO in December (it is suspected that the government will be signing the WTO-GATS agreement, whereby education will become a tradable service and inflate the expenses of higher education). Hundreds of students and concerned citizens, from different universities and different parts of the country, had gathered in front of UGC and peacefully marched towards the parliament. 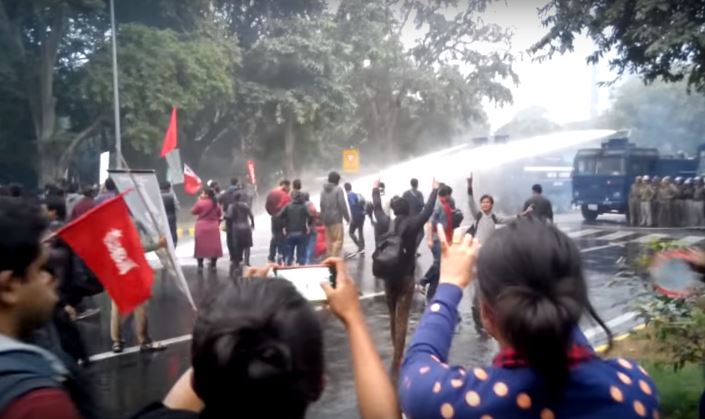 However, as has been the case before, police intervention disrupted the march: a police barricade was set up at Firoz Shah road, leading to a chaotic situation. Students were lathicharged, and assaulted, (some had to be hospitalized with injuries) and detained; the police used water cannons and tear gas to disperse the gathering.

Subsequently, most of us went to the Parliament Street police station to demand the release of those who had been detained and to lodge a formal complaint against the brutal tactics of the police. It is evident that the police were given orders to not allow the students to conclude the march, and it also seems to be quite apparent that the central government is not in the mood to constructively engage with the concerns brought out through the movement.

Why are students continuing to struggle against exclusionary administrative policies, then? Students are not merely struggling for a fellowship; they are struggling to create spaces where hierarchies and divisions are challenged, spaces which are genuinely inclusive. What the movement has brought out for me is that everyone – whether students, teachers, or workers – are struggling in their own capacities, within their own local contexts. As all of these struggles begin to speak to each other, the possibility of social transformation looms larger. One of the posters used in the march asserted “Say No to Fund Cuts!”; perhaps we can begin to interpret it as “Say Yes to Inclusive Education”.

To know more about the Occupy UGC movement, watch ‘Education Is Not For Sale‘.