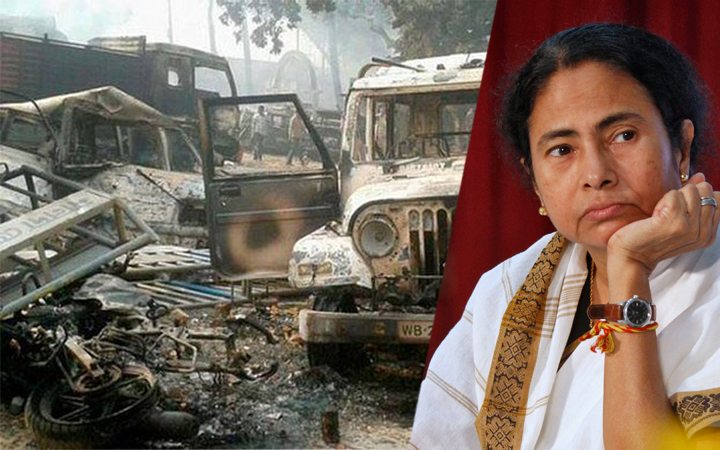 Violence broke out in Kaliachak on Sunday, January 3rd, after a mob protesting alleged remarks made by self-styled right-wing activist Kamlesh Tiwari from UP, had an altercation with the police. Tiwari has been arrested for his remarks where he apparently called Prophet Muhammad the first homosexual in the world in a press note issued by him and had allegedly also circulated pamphlets against the Muslim community. However, organisers of the protest have denied any role in the violence and blamed the police and “outsiders” for the same.

A BJP delegation led by Shamik Bhattacharya, its lone MLA in West Bengal Assembly, was not allowed to visit Kaliachak village, about 30 km from Malda, which had witnessed violence on Sunday. They were detained by the police and taken to the local police station. But they were released in about ten minutes.

The delegation was requested by the police not to visit the village in view of the law and order situation.

Later, Bhattacharya told reporters that they wanted to visit the village to know about the exact reason of the Sunday’s incident but were not allowed to go.

Bhattacharya also said he had received a phone call from the Chief Minister Mamata Banerjee while he was sitting in the police station. He however, declined to divulge the content of their conversation.