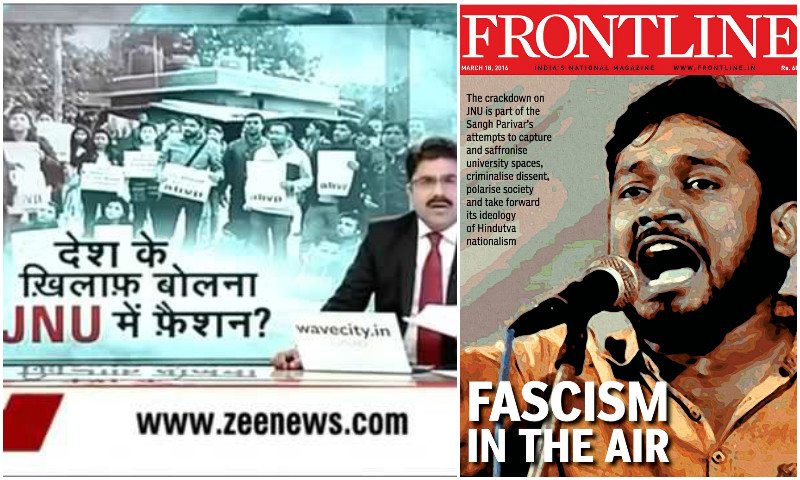 Frontline, the fortnightly news magazine belonging to The Hindu group, has decided to stick by the report it ran as a cover story called ‘In Defence of JNU‘ despite having been served with a legal notice by TV channel Zee News over the same, for allegedly defaming the latter’s reputation.

Attempts made to reach the legal firm Singh and Singh/Lall and Sethi (SSL & S) which represents Zee News in the matter were unsuccessful.

In a legal notice served to Frontline’s editor R. Vijaya Sankar on March 11, Zee News alleged that the newsmagazine’s coverage of the issue, especially the part that cited links between RSS backed ABVP and the news channel was “defamatory”. Zee News also objected to the part in the magazine’s reportage which stated that the ABVP and the channel had acted in a “pre-planned manner”.
Furthermore, the notice (a copy of which is in possession of Youth Ki Awaaz) states that slogans against the Indian army and in favour of late Afzal Guru were raised by Umar Khalid, the young scholar who spent weeks in jail over charges of sedition. It notes – whether wrongly or rightly – that protesters were carrying banners with the photograph of Afzal Guru and demanded freedom for Kashmir. However, it does not state clearly if the slogans “India Tere Tukde Honge…” and “Jung rahegi, Bharat ki barbadi tak” were raised by the JNU students.

It goes on to maintain that the video footage aired by the channel was genuine and not doctored, while noting that even the High Court had relied on it while delivering its judgement.

It also takes umbrage at the report calling Zee News’ coverage “sensational”. Having listed the grievances, the notice asks the news magazine to pull the story out from its website within “24 hours” and publish an apology in the “next issue” with prominence.

However, sources in the know confirmed that the magazine had no intentions of carrying out the demands made by Zee News. “It is an attempt to intimidate,” said a source. No official comments were forthcoming from the publication. Another source said that the legal team in Chennai was handling the matters and till now, an apology had not been considered, in a clear indication that the magazine was sticking to its stand.