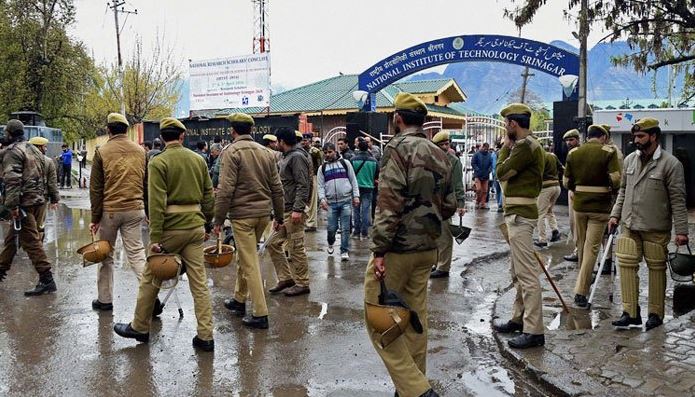 Under fire over the lathi charge against outstation students of the NIT in Srinagar, on April 8, 2016, two senior officers of the Jammu and Kashmir Police hit back, saying they don’t need a “certificate” of nationalism or impartiality from anyone.

The police officers–Mubassir Latifi, an SSP posted with the elite crime branch and Firoz Yehya, Deputy SP at Baramulla Headquarters–took to social media on Thursday to vent their anguish over the criticism against the state police for their actions against the students in the wake of the unrest at the National Institute of Technology (NIT) here.

“J & K Police doesn’t need any certificate of nationalism or impartiality from those whose valour doesn’t extend beyond their keypads,” Latifi posted on his Facebook account.

“J & K Police is a saga of sacrifice and courage and has brought this state out of a madness called terrorism,” Latifi, a Masters in Law, said.

“Jammu and Kashmir Police doesn’t discriminate on the basis of who’s local and who’s nonlocal. Neither do we enjoy beating up people. Force is used only for maintenance of law and order and to disperse unlawful assembly of people,” he added.

Yehya said that many of his colleagues have been asking and many more must be thinking, “whose war are we fighting?”

“Many of my colleagues have been asking and many more must be thinking ‘whose war are we fighting?’ All I can tell them is that, this is just another phase and will pass. Further, JK Police doesn’t need any certificate…”

“We must continue doing the good work within the ambit of law and nothing shall deter us…Good common people who we serve may be alienated with us for reasons more than one and our good work shall certainly help us win their hearts,” Yehya, a Masters in Economics, said.

Yehya reminded critics that the state police has taken tough action against its own officers whenever they have been found guilty of overstepping their jurisdiction.