In Photos: 12,000 Dalits Take To The Streets In Ahmedabad In Protest Against Atrocities

A massive rally took place in Ahmedabad’s Sabarmati area on July 31, 2016, to protest against the July 11 flogging of a Dalit family in Una, a town in Gir Somnath district of Gujarat by members of a ‘gau raksha’ (cow protection) group. More than 30 groups of Dalits reportedly participated in the rally, filling the 5000 capacity ground completely by noon. According to some reports, the number of protesters participating in the rally was as high as 12,000. The rally was organised by Una Dalit Atyachar Ladat Samiti, which is headed by Jignesh Mevani, a lawyer.

People carrying posters of Rohith Vemula were also seen at the protest and the issue of delayed justice in cases of previous atrocities in Gujarat was raised. Gujarat has seen regular protests since the atrocity happened, with protesters dumping animal carcasses at government offices. On July 31, the pledge to not dispose dead cattle and to stop cleaning sewers was taken up at the rally too.

Chief Minister Anandiben Patel has since offered her resignation. She has, however, said in a Facebook post that she is resigning to follow the party tradition of voluntary resignation after attaining the age of 75. Although she is to turn 75 later this year, she has said that she wants to give the new chief minister time to prepare for the Gujarat Assembly Elections and the Vibrant Gujarat Summit.

Support for the July 31 protest also came in from leaders of Jamiat-e-Ulema-e-Hind, Mufti Abdul Qayyum Mansuri, who was acquitted in the Akshardham terror attack case and has subsequently written a book about being tortured in jail, and other Muslim youths, who joined the protest in solidarity. Former IPS officer Rahul Sharma, who has been facing heat from the Gujarat government since he submitted electronic evidence before the Nanavati Commission in the 2002 riots case, also attended the protest. 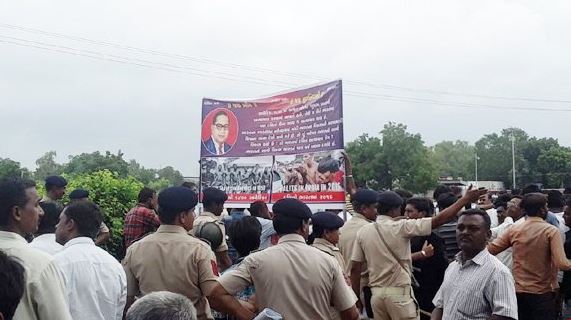