By Sharjeel Usmani in Campus Politics

The Aligarh Muslim University Students Union election which was scheduled to be held on September 26, was cancelled today after a specially convened meeting of the University’s executive council members. The official memo displayed by the administration read that ‘extraordinary conditions’ had led to the cancellation.

“A disturbing situation has developed following the participation of expelled students, criminals and non-students during the campaign. There are also reports that contestants and their supporters have been making forcible entries with vehicles into the women’s college and other halls of the residence and classrooms,” the notification said.

Blatant violation of the Lyngdoh Committee recommendations and the AMU Students’ Union amended regulations 2012, is also believed to be one of the reasons for the cancellation of the elections.

AMU Vice Chancellor, Lt Gen Zameer Uddin Shah told PTI, “I had decided to hold the elections despite misgivings in some quarters because I am deeply committed to the functioning of the Students’ Union.

“However, I am pained by the fact that despite repeated warnings, there has been a blatant violation of election regulations both in letter and spirit. I am fully aware that a section of the student community will be angered by my decision,” he said.

“I owe a certain responsibility to this institution and I am fully prepared to be held accountable for this decision. I am determined not to hand over this institution to criminals and other anti-social elements trying to exploit sentiments of students and play with their careers,” he added.

The students are outraged after the cancellation and keeping in mind the volatile situation, the security in the campus has been beefed up in and around the campus and Rapid Action Force (RAF) has been deployed at all the important spots. 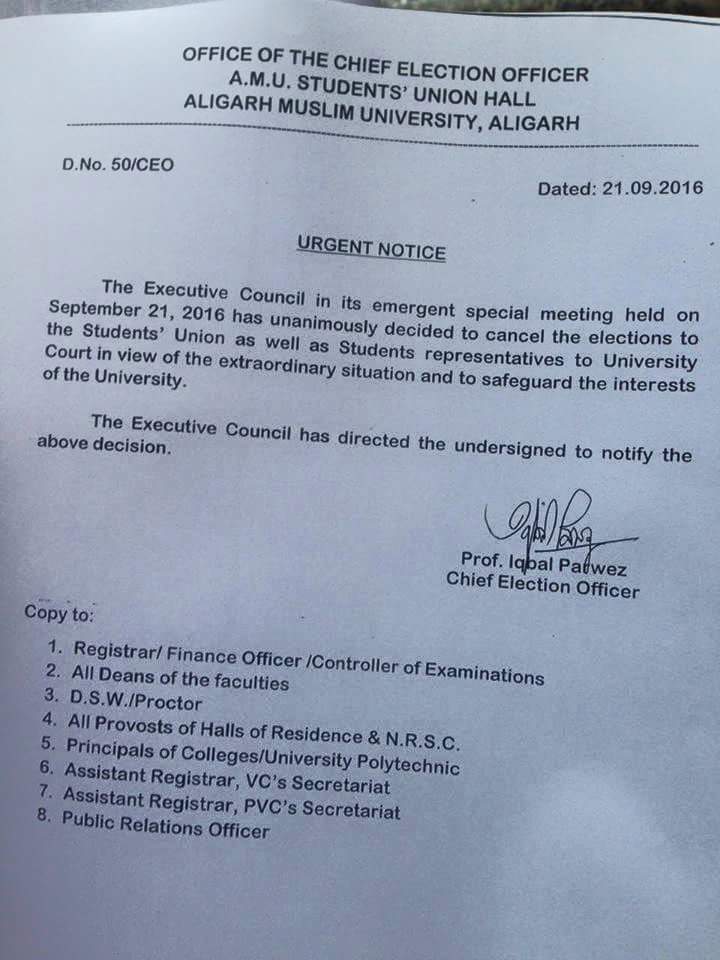