By Saswati Chatterjee in Latest

In the wake of the attacks in Uri, and India’s response to them, the mood in the country has been intense to say the least. The anger and frustration over the death of 20 soldiers at Uri was followed by jubilation and condemnation over ‘surgical strikes’ carried out by India on alleged terror camps at PoK (Pakistan occupied Kashmir).

With lives lost and possible threat of war looming over the horizon, some brands think it’s a good idea to use the strikes to offer discounts. Because a possible war between India and Pakistan is a great time to make a quick buck.

Check out these messages from SMAAASH and MobiKwik: 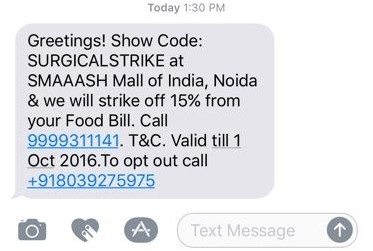 The discounts weren’t met with particular joy in the online community, particularly Twitter, with users pointing out that this wasn’t only insensitive, but opportunistic too. They also pointed out that the strike was carried out against ‘terror bases’ and not Pakistani infrastructure. Therefore, offering discounts with the implication that India attacked Pakistan rather than India attacking terror bases is misleading. Wars are not meant to be celebrated. Violence is not meant to be rejoiced over. 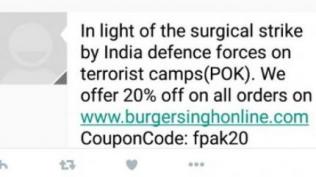 Of these brands, a fast food outlet, Burger Singh, faced particular flak for the insensitive wording of its code.

What a complete fail by #BurgerSingh with its insensitive 'fpak20' discount code. Thanks for zero constructive input ?? 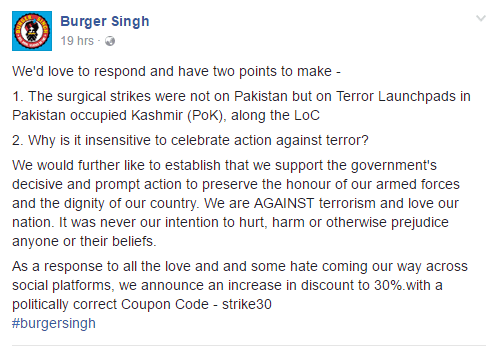 As an answer to Burger Singh, it’s insensitive because ‘fpak’ doesn’t seem like a celebration of a strike against terrorism. Unless you associate an entire country with terror, which is an extremely dangerous and problematic point of view. No institution (even if it a fast food place) should be insinuating that the citizens of an entire country are associated with terrorism.

And trying to profit over a serious military manoeuvre? Not cool.

Pride Month And The Importance Of Acceptance For The LGBTQ Community

An Overview Of The Gaza Conflict