Breaking Down The Reality Of PM Modi’s Swachh Bharat Mission

Editor’s Note: This post is a part of #InDeepShit, by WaterAid India and Youth Ki Awaaz to understand the reality behind the inhumane practise of manual scavenging in India. You can speak up against this form of discrimination and share your views by publishing a story here.

Earlier this year, Kunwar Bai, a 105-year-old woman from Chhattisgarh, reportedly sold off several goats to build toilets in her house. She was felicitated by the Prime Minister and made the mascot of the Swachh Bharat Mission (SBM). Kunwar Bai’s act was even lauded by several media outlets as a positive example. However, it has raised some troubling questions for those working in the field of sanitation and hygiene awareness. A goat has a huge economic value in a rural economy.  Is promoting such sacrifices by individuals the right practice for promoting sanitation?

Much has been written and said about the SBM’s successes since the launch of the programme two years back, and there’s an eagerness to measure what improvements have been made since then. The Government has brought out two reports this year, based on NSSO (National Sample Survey Organisation) surveys to gauge progress made. Interest in this measurement is also pertinent as SBM is not the first government-run sanitation drive in the country. The Total Sanitation Campaign had been running since 1999 before it was renamed the Nirmal Bharat Abhiyan in 2012 and, subsequently, the Swachh Bharat Mission in 2014.

On the occasion of SBM’s second year anniversary, we look beyond the numbers to explore the practices and attitudes around the campaign, and what needs to be done to realise this dream of a cleaner, healthier India.

1. The Need For Behaviour Change, Not Just Toilets

According to Yamini Aiyar, Director of Accountability Initiative (AI) at Centre for Policy Research, there has been an improvement over the previous programmes and there is now an overall recognition that usage and not toilet construction, is the endgame. However, the limitation of the current programme is that while it had been understood that becoming ODF (open defecation free) is the new target, it hasn’t been understood in the context of public health. “The second limitation is – and that feeds into everything – how you think about your behaviour change narrative, how you think about what you have to measure and how you should measure it,” she says.

This realisation of behaviour change being an important aspect arrived when the 2011 census data came out, observed Avani Kapur, a senior researcher at AI. Although a large number of toilets were reported to have been built under the Total Sanitation Campaign, the data showed that around 53.1% households do not have toilets. 49.8% households were reported to be defecating in the open. As reports have shown, some places that were declared open defecation free during previous programmes have even gone back to open defecation. The government’s own 2012 Baseline Survey for SBM (Gramin), where over 99% of Gram Panchayats have by now made entries, shows that about 21% households, among those who have toilets, have dysfunctional toilets.

Kapur further pointed out that, despite our acknowledgement of ODF villages as a target, there is a huge difference between villages that have declared themselves ODF and those that have been verified to be ODF. As of now, of a total of 6,08,520 villages, 54,732 have declared themselves ODF, but only 20,991 have been verified to be so.

2. The Need For Awareness Building

Binu Arickal, a Regional Manager with Water Aid, recognises dysfunctional toilets and people not using toilets as the repercussion of a singular focus on infrastructure. Indeed, if one evaluates the government data on expenditures in SBM (Gramin), one will learn that over 90% expenditure happened in the past two years in the construction of household, school, or anganwadi toilets and sanitary complexes. IEC (Information-Education-Communication) expenditure, on the other hand, dropped from 4 percent in 2014-2015 to 1 percent in 2015-2016 (until February).

A report authored by Kapur, based on a December 2015 survey of 7500 households across 10 districts in five states, sheds more light on the status of SBM awareness programmes. 37% of surveyed households had constructed a toilet since April 2014 without applying for an SBM grant. 61% of those who had not applied for a SBM grant did not do so because they did not know they could. Most households did not know that SBM guidelines mandate Swachhata Doots (Sanitation Messengers) who are supposed to spread awareness about cleanliness.

3. Manual Scavenging – A Way To Spiritualism?!

The awareness strategy also has other critics. At a recent function to felicitate Safai Karmachari Andolan national convener Bezwada Wilson, after he had been declared a Magsaysay award winner this year, Wilson slammed the Prime Minister’s calls for Swachh Bharat when manual scavenging continues to exist. The PM is reported to have called cleaning toilets “a spiritual experience”, and there’s a reflection of the same in the awareness strategies that are being run.

“How can it be a spiritual experience to lift someone’s excreta with your own hands?” Wilson questioned in an interview with YKA earlier this year. “A PM, for that matter any human being, should not talk like this. He must understand that there are people who are coming out and burning their baskets. It is a caste-based occupation imposed on us. It is violence on us.”

With regards to the awareness strategies, Kamini Prakash, Technical Officer for Equality and Non-Discrimination at WSSCC (Water Supply and Sanitation Collaborative Council) India, observes the following pattern, “We find that now there is so much focus on this collective behaviour change that trainers are just going and triggering communities. They’re not looking at, you know, who is getting excluded, what sort of messages are going through, and what in fact is reinforcing inequality.”

Prakash says that for WSSCC (a UN body working for sanitation and hygiene), sanitation is only an entry point to talking about inequalities and discrimination. 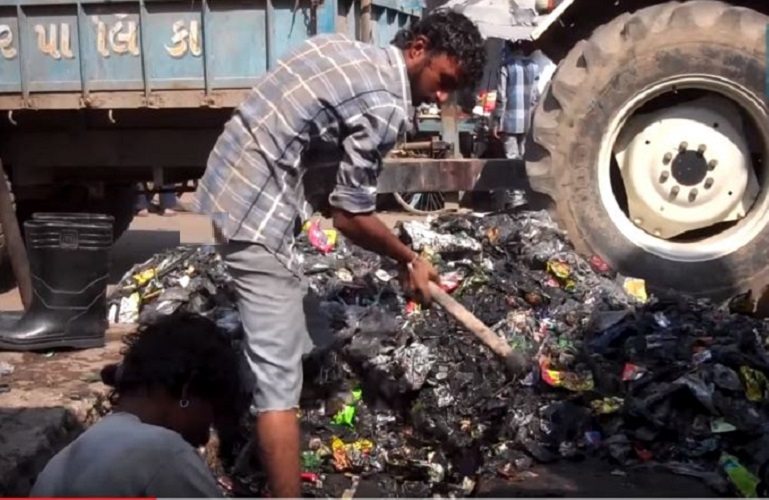 4. The Reality Of Building Toilets In Villages

Prakash’s worries about the kind of messages that are going through and that inequality is being reinforced, is not unfounded. Take the case of incentivisation. As in the case of Kunwar Bai, it was reported enthusiastically, in October 2015, that an SC student in MP used her scholarship to build a toilet; her father, a daily wage labourer, had paid her fees on his own. Experts argue that this is not the way because the scholarship was supposed to be used for education. Yet, persons who undertake trouble to meet SBM’s requirements seem to be lauded in even the “case studies and best practices” listed on the website of the Ministry of Drinking Water and Sanitation.

Coercive measures abound with SBM. Panchayats and households have been threatened that if they don’t construct toilets, developmental work or even ration under the PDS (Public Distribution System) will be stopped. While this emphasis has made district collectors and chief executive officers of panchayats prioritise sanitation, there’s also an urgency to meet targets.

5. Stop The Naming And Shaming

A glance through the best practices listed in the ministry website also shows that shaming those who defecate in the open is an accepted practice under SBM. The most recent variation in this practice is the use of drones to find and punish people who defecate in the open. Prakash asks instead, in a summary report for collective behaviour change consultation, that we understand the barriers that prevent people from adopting safe and hygienic sanitation practices.

How then can we fix the problem of sanitation in the country? Arickal says that the government should focus on IEC, and in a manner that is not restricted to social media but involves human resources. This, he says, will help in understanding the village, and prevent extraneous or wasteful expenditure.

Two years into the SBM, we need to acknowledge that these are not new problems. The Prime Minister and our Government in all probability know how the other two sanitation programmes fared. If SBM is indeed a new beginning, it would be useful to improve on the mistakes that were previously made, apart from the scaling up of construction investment that we have already seen.