By Campus Watch in Campus Politics

Najeeb Ahmad, a 27-year-old-student from Jawaharlal University has been missing for the past 18 days. Allegations are that Najeeb was beaten up before his disappearance and that there is political pressure on the police and the administration against ensuring justice for Najeeb. The students of Calicut Medical College have joined hands with the nationwide protests demanding justice for Najeeb in a unique way.

Under the leadership of the college union, the medicos have set up a mass petition campaign, with each student sending an individual petition to the Home Ministry, demanding action to bring Najeeb back. Shamsheer Nawas, the General Secretary of the college’s student union told Campus Watch, “In a span of just 5 hours, more than 300 students signed the petition. Each petition is a streak of light in the darkness of silence.”

“It is important to realise is that it could have been any of us in the place of Najeeb. We are living under a system that promotes intolerance and fascism,” said Arif Sha, the Chairman of students’ union in Calicut Medical College. The students have also made digital posters declaring themselves to be missing and propagated them on social media to raise awareness. The idea behind the campaign is that as long as it remains alive in the social consciousness, justice cannot be denied. 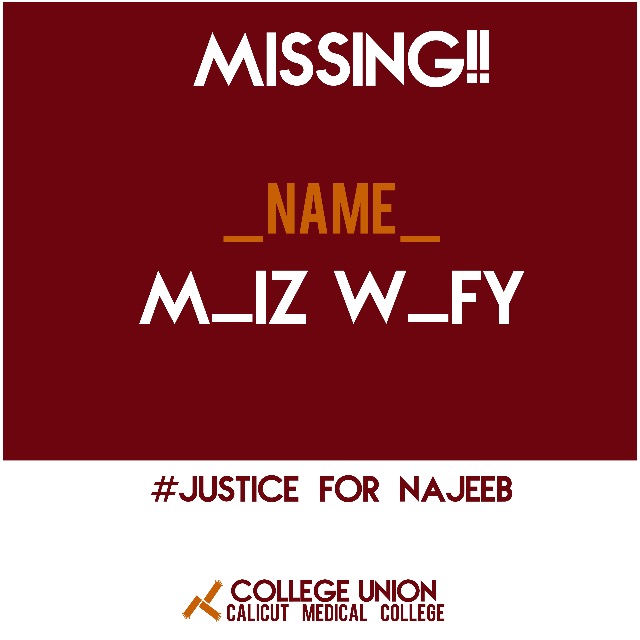 One of the petition reads, “Najeeb today. One of us tomorrow. Bring Najeeb back”; “Silence is a sin”, says another. As more and more students are submitting their petitions, one is reminded of Margaret Mead’s words, “Never doubt that a small group of thoughtful, committed people can change the world. Indeed, it is the only thing that ever has.”