By Aaskar Jha in Society

Prime Minister Narendra Modi on Saturday came flying down to financial capital and laid the foundation for a ₹3600cr Shivaji memorial in the Arabian sea. This statue will rest on a green foundation. In the wake of the announcement, Maharashtra CM Devendra Fadnavis proposed to use rubble from the 33.5 km long Colaba-Seepz underground Metro line to help build Shivaji memorial in the sea.The height of the statue will be 192 metres and the total area of the project will be of 42 acres. The statue will stand erect in the Arabian Sea and will be 3.5 km from Girgaum Chowpatty, 1.5 km from Raj Bhavan and 5.1 km from Nariman point.

The project was first conceived 12 years ago and since then, its budget has skyrocketed to 35 times. The cost of Project management and consultation will be ₹83.73 crore and it would be paid to Egis, a French engineering group. This is the same company that won the contract for Sardar Vallabhbhai Patel’s statue.

Justifications for the statue on social media are the best: 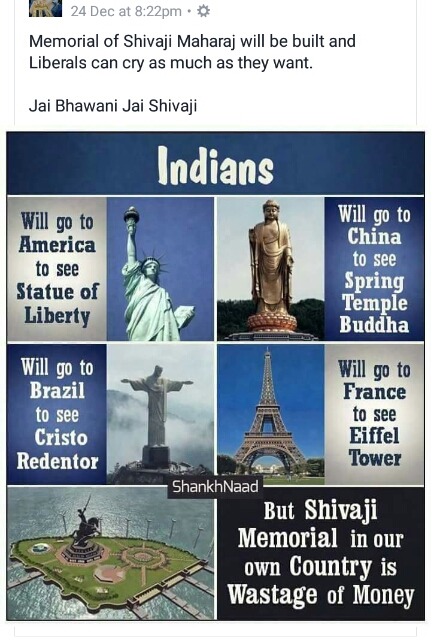 We Indians are not good at making statues but are the best at letting our children die of hunger. World Bank Report on India issued in 2006 estimates that underweight children in India are among the highest in the world. The 2016 Global Hunger Index (GHI) Report ranked India 97 among 118 developing countries with a serious hunger situation. Since 1991, our GDP has increased more than 50% but still more than one-third of the world’s malnourished children live in India. Fifty percent of Indian villages are affected by malnutrition. According to World Bank, India suffers the loss of $12 billion in GDP to vitamin and mineral Deficiencies. In India, 44% children under the age of 5 are underweight. Money allocated to build this statue is more than budget allotted by few states for building new rural roads and fixing old ones, renovation and building of new schools.

For the supporters – Memorial of Shivaji Maharaj will be built and children and farmers can cry of hunger as much as they want.