While the ‘anti-national’ has been a ‘person of interest’ in India for several years, never has ze been of so much interest, nor has the list of the anti-national been so bizarre. That is to say Uncle M of the 56 inches upped the ‘I Want You’ game by several notches this year.

The conscription in the anti-national army began at nearly zero dark hours of 2016 when BHU professor and Magsaysay awardee Sandeep Pandey alleged that he was removed as a visiting professor of the university for his involvement in ‘anti-national’ activities (read for his ideology and for criticising the government).

Following closely was the revelation that labour minister and BJP MP from Secunderabad Lok Sabha Constituency in Hyderabad, Bandaru Dattatreya, had written a letter in 2015 to the HRD Minister Smriti Irani calling University of Hyderabad a den of “anti-national politics”. This, the students then cited, could possibly have been the reason why five students of the university faced disciplinary action, which ultimately led to the death of Rohith Vemula.

Soon after, fake tweets, RSS feeds, CM-speak, etc ensured that Google Maps developed a bug and ended up mapping UoH and JNU as the war-room of the anti-national, anti-RSS feeds and related protests notwithstanding.

Imagine, said Uncle, Sri Sri 1008 anti-nationals and there was another anti-national who opposed Sri Sri’s Art of Living programme. 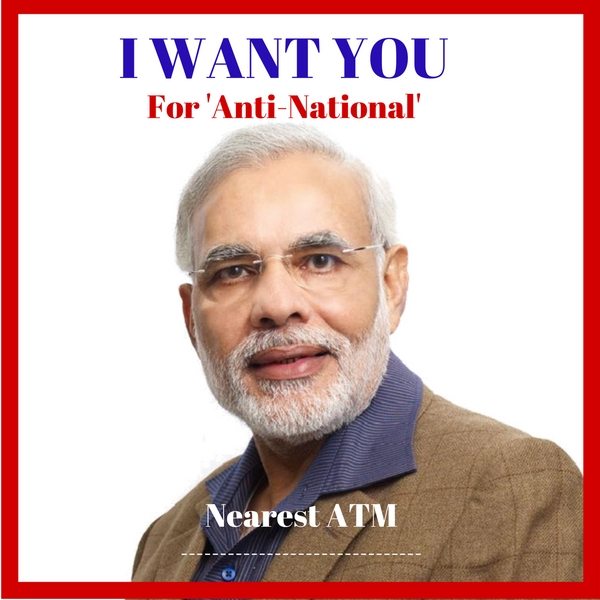 , poet, Urdu writers– all got their very own Certificate of the Anti-National, often by Zee itself, until BMKJ (Bharat Maata Ki Jai for the uninitiated) was a proper land-to-moon missile for saving the nation. Short-skirts, Gurgaon, Raghuram Rajan, Tipu Jayanthi, non-ayurvedic doctors, Saina Nehwal– the animate and inanimate all joined the amoebic state of the anti-national.

The Midnight’s Children (anti-nationals since the ‘tryst with destiny’ midnight)- Kashmiris, people from the north east, Adivasis, Dalits, Muslims– are of course tied to the fate of the nation and kept the search for anti-national alive on Google Trends if and when times were lean for Uncle.

Near the year’s end, Uncle found the most ingenious method for recruiting people to the anti-national force. #Demonetisation ensured that people were lining up in scores at the nearest centre for conscription. The only skill required now is the ability to groan in distress. There were martyrs but as per latest reports they have not received the badge of honour.