Mohd. Shami Just Brilliantly Slammed The Trolls Who Attacked Him And His Wife On FB

By Sumit kumar in Media, Society

Mohammed Shami, an Indian fast bowler, became the target of a bunch of uneducated, fanatic, racist and sexist dolts on Facebook when he posted a picture of self along with his wife. They chided Shami for violating norms of Islam as his wife’s body was not veiled under a Burqa. Some of them even questioned the religion of Mohammed Shami and asked him to remove “Mohammed” from his name. 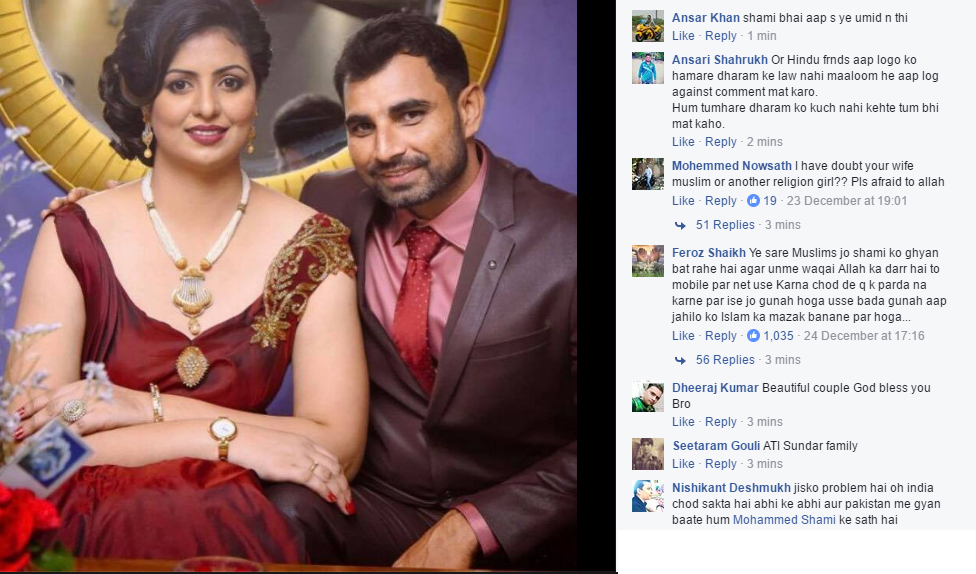 The story did not end here. After Shami wished to his followers Merry Christmas on Facebook, the same bunch of uneducated fools made venomous remarks against him for hailing Christianity. They castigated Shami for “diluting” the values of Islam.

As an Indian Hindu, who has studied in a Christian college and visits Muslim friends during Eid, I fear this kind of bigotry and divisive mindset of the uneducated fools. Religion is a private affair and everyone has the fundamental right to practice his religion as per his/her will. Freedom of faith and belief is the basic doctrine of our constitution explicitly mentioned in the Preamble. But when a group of people tries to force their individual beliefs on others, they not only interfere with the individual liberty of the other person but also vitiate the values of their own religion, which in any case preach the acceptance of divergent views and tolerance towards others sect. The ones who try to display their religious fanaticism on the internet by spewing venom against the likes of Mohammed Shami are the ones who don’t understand the values, moral and faith of any religion.

I was glad that Mohammed Shami reposted the pictures on Facebook and gave a befitting reply to the haters through his stinging retort. Despite the divisive tactics of many groups, cricket is one organisation which has remained secular in nature and religion has never been able to create a divide among the players. Mohammed Shami has won many matches for India through his bowling and every Indian, be they Hindu/Muslim/Sikh/Christian is proud of him.

The people who have vomited rubbish on his page should introspect. They should rather care about making their own lives better and thinking about own affairs. Those who live thousands of years in the past and desire a theocratic state based on one single religion should stop dreaming. Diversity, dissent and democracy, based on rule of law, forms the Idea Of India. No individual, religion, group, party, region can supersede the Idea Of India. Hatred and bigotry can lead them to anywhere but god.