If Homosexual Love isn’t Love, Who Defines What Is?

By Saurabh Sharma in LGBTQ, Society

“Your task is not to seek for love, but merely to seek and find all the barriers within yourself that you have built against it.” ~ Rumi

This legend understood it in the 13th Century which most of the so-called sophisticated and educated people of heterosexual hegemonic regime refuse to understand even today. Or it is just that we don’t have the mettle to understand it. Whatever the reason might be, something is really disturbing about our understanding of love, to be precise in the understanding of same-sex love.

I see people eyeing any gay couple walking down the street (a crude judgment here). One of my friends has a purse and whenever he meets me in the metro, people leave everything important and unimportant and stare at us like we’re alien.

I have overheard many saying, “Ye Ladki wala purse kyun le rakha hai ladke ne?” (Why this guy is carrying a lady’s purse?), “Dusre ke paas nahi hai, dost hain?” (The second guy doesn’t have this, are they friends or what?)

I mean, brother, man, whoever you are, will clothes and bags of ours tell you about our sexuality? Okay, even if they do. So what?

I believe in a very simple logic, if you have a problem, say it. If you have a confusion, get it cleared. If you have any doubt, ask. We’re so open to questions, man. I’m sure if you’ll ask my friend, he can get your cobwebs cleared. Ask me I’ll counsel like a hetero, but fucking keep your scary stare to yourself.

Treat what’s written as an epilogue to the movie “Weekend” which I watched a month ago. Not just the Indian society but wherever this heteronormativity principle rules, people who fall under the LGBTQ+ bracket are going to get reprimanded, not accepted and would be subjected to all kinds of abuse.

A very poignant narrative based on the lives of a lifeguard Russell (Tom Cullen) and an artist Glen (Chris New), “Weekend” movie is directed deftly by Andrew Haigh. I choose to write this epilogue to put things in perspective. There are so many reasons behind homosexual people to remaining closeted. The major factors unsurprisingly are their families and society.

Russell is a closeted individual while Glen is openly gay who came out before his parents at the age of 16 on Mother’s Day. Russell couldn’t because he was raised in foster homes and did not have a family to share this with. After attending a party at a gay club, Russell and Glen are in the former’s bedroom (probably after sex). In the morning, Glen begins to record and asks Russell to tell him what happened between them the previous night. This could be an old habit of Glen’s. He tells Russell that it is for an art project.

Suddenly, Glen climbs down the bed whispering to Russell, “Did you hear that?” Someone is shouting outside, “Queer”. Imagine someone living fourteen floors above the ground and a random jerk is shouting ‘queer’.  How far can this bullying go?

Glen gives a strong reply but Russell is so afraid that he wants him to shut the window and return. After usual conversations, Glen is about to leave. There’s a poignant parallel shown here. Near the elevator, a straight couple is bidding farewell to each other and they kiss. Glen is looking expectantly at Russell but he knows that he is a little afraid of expressing love openly. He smirks and says, “see you soon!”

The scene which affected me the most was this discussion between the two of them sitting on a sofa: 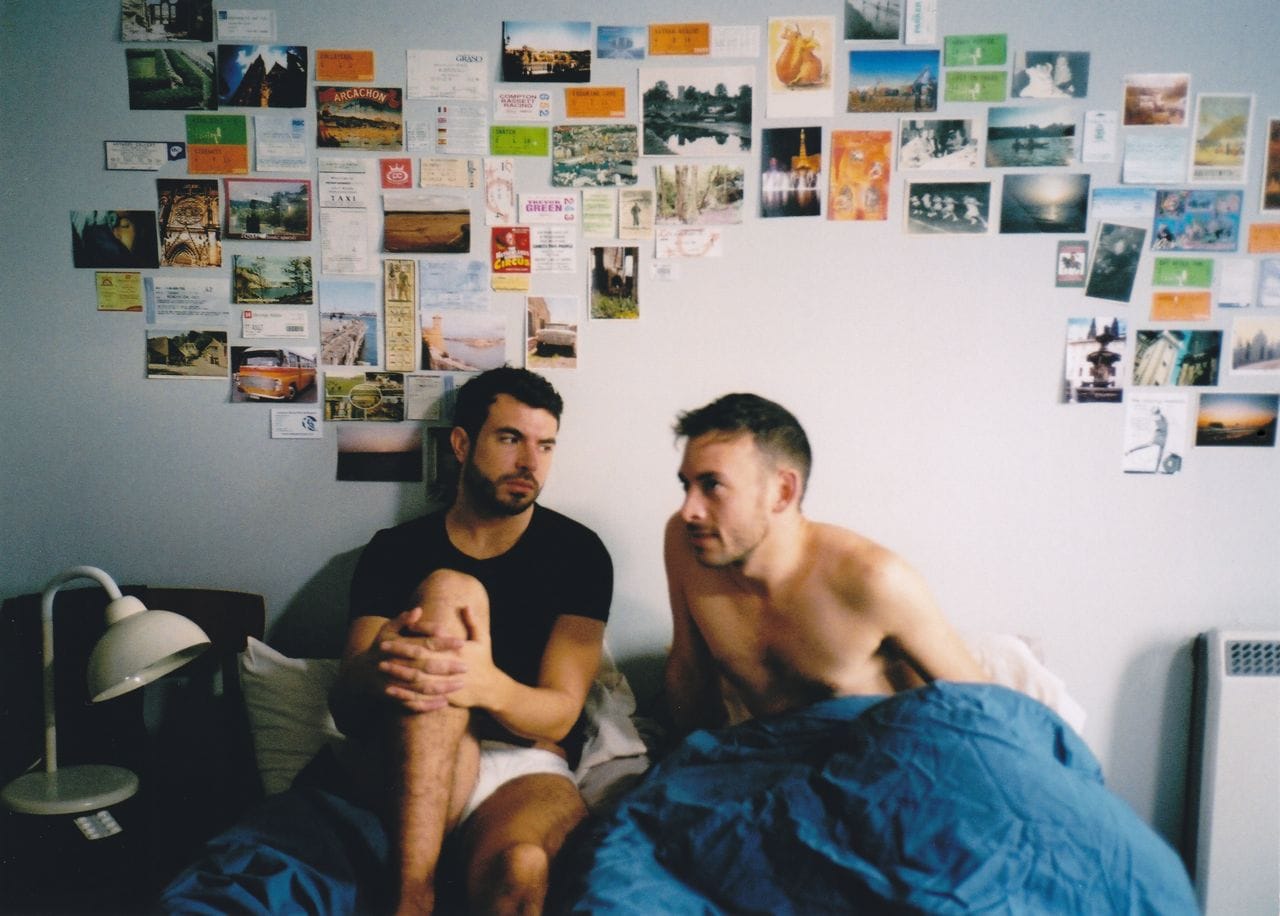 Russell: It’s for an art project, Yeah?
Glen: Yeah.
R: So, Is that What you want to be, you want to be an artist?
G: Kind of.
R: So, and you really don’t have to tell me, how is your tape art project just going to be an art project and not people talking dirty?
You know what I mean.
G: It’s just I’m not sure if… (Grunts)
… people want to hear about the random sex life of strangers. You just don’t want people to hear about your sex life.
R: That’s true.
G: Imagine if everybody was just open about what they did and that everything was normal.
R: Yeah, but people are open, aren’t they?
G: Are they? Gay people never talk about it until it’s a cheap innuendo. It’s like when you sleep with someone whom you don’t know. It becomes this blank canvas and it gives you an opportunity to project onto that canvas who you want to be. Well, what happens is, while you’re projecting who you want to be, this gap opens up between who you want to be and who you really are, and in that gap, it shows you what’s stopping you from becoming who you want to be. They’ll go see movies of refugee, murder or rape. But gay sex? Oh, Fuck off! I told them nature or nurture, it’s your fault so get over it!

I was intrigued by the argument when Glen was shouting at Russell and telling him that people compromise they can’t bear their life by being themselves. No one is themselves. They compromise.

We do compromise, don’t we?

What makes me write this?

I attended a talk at the Indian Habitat Centre which was titled “Beyond 377”. The panellists included a gay magazine founder, an advocate, two civil society individuals working on raising awareness on the subject of sexuality and help sexual minority communities.

After the discussion, during the panellist and audience interaction, a person who has recently written a book about a homosexual relationship spoke up. Through his telling, we came to know that the book has been well-received. We also came to know that he had written the book under a pseudonym so as to hide his real identity from his family. And, as fate would have it, he found his daughter reading it.

He shared that he happened to be well settled and married. He has a 15-year-old daughter now. He was kind of unsure of his sexuality at the time of his marriage, or probably he knew but hid it from his family. But what can he do? He said that he is attracted to men. How to confess this to his wife after years of being in this relationship? And how would his daughter react when she finds out that her father is gay?

Let me draw your attention to this scenario:

“It’s fine yaar! We can’t judge anyone, that was love, c’mon. He happened to be married to this woman and now after a few years, okay after 15 years, he falls in love with another woman. What’s the harm in it? That’s love. Why do we fail to understand this?”

Consider the reaction to the situation mentioned about. Is this the kind of liberal statement you are bound to hear from any sophisticated individual about a heterosexual guy falling for a woman after years of marriage? Probably yes. When I heard the author’s case, I kept thinking whether we as a society would extend the same logic to him? What idea of love do we have when we hear about a man falling in love with another man? In times like these, this is the fundamental question.

I have a doubt and I would like my readers to clear it for me. Do we have a definition of love which is accepted by us because a segment of society wants to accept it? Or, do we understand love as a spectrum of emotions where there are endless possibilities?