Being A Bengali In Times Of Riots, Misogyny And The Saffron Tide

“I disapprove of what you say, but I will defend to the death your right to say it.” – Evelyn Beatrice Hall

The question, “What does it mean to be a Bengali?” did not mean very much to me until now. Suddenly, in this politically tumultuous moment, it means a lot. It brings with itself incessant remarks in North India. We are ‘oversensitive’, ‘colonisers’, ‘lacking a sense of humour’. We are by default ‘anti-nationals’, ‘leftists’, ‘JNU types’, etc. As with all stereotypes, these are derived from some things that are true for some people, and turned into labels to describe everyone else.

My own understanding of being a Bengali borrows from those stereotypes and also challenges them. My father was a socialist, my mother an educated working woman (Bengali women are supposed to be independent and the antithesis of what an ideal ‘Bharatiya nari‘ should be). Fish was an everyday thing, and so ordinary that I did not know until a few years ago that there are days when you can’t eat non-veg – including fish. This feels blasphemous to my childhood memory. More importantly, women were not the home-makers by default at my home, and usually, a domestic help was engaged. How middle-class employers treat their domestic workers is deeply problematic and demands a separate conversation of its own. But Indian society predominantly holds the women of the house responsible for household chores, and I have received flak from a friend who felt that my mother was too independent.

As with all of us everywhere, I grew up with my own set of dichotomies. I hated fish and finally feel happy that in the independence of my own home, I never have to eat fish if I don’t want to. My parents, with the influences they grew up with (Brahmo Samaj on my mother’s side, and refugees from East Bengal on my father’s side), decided to not follow rituals – not too many at least – and rejected customs such as following a vegetarian diet when family members passed away. We did not have a separate space for worship in our house, but my mother, who is a believer, continues to go to the Kali temple next door.

I went to a Marwari school owned by the Birlas where many of my friends were Marwaris, Biharis, Punjabis, and from other communities. In school, my first language was English and my second was Bengali. For three years, from classes 6 to 8, we had to study basic Hindi. We took that class as seriously as kids treat their extracurricular activities – with utter disregard. The need to know Hindi, for us, was basically the need to speak to our friends from the Bihari, Marwari, or other communities. That spoken Hindi training had already been imparted by the Hindi films that we had devoured since we were toddlers.

So what was it about being Bengali again? It meant a certain inheritance of the colonial rule and the Western ideas that were first introduced to Bengal. The introduction to anglicised systems of learning was simply due to Bengal’s strategic position in the sub-continent, where the British set up their camp and needed subservient clerks to do their menial tasks. The Bengali upper castes and classes happily filled up those roles and gained from the British rulers and their education systems. I became aware of the history much later and finally understood what led to the reformist and progressive attitude of Bengal. Bengal, in comparison to most parts of India, has regarded education with high esteem. Even when one is poor, one must educate themselves and their children (admittedly, this is easier if you belong to a certain class or a certain geographical location within Bengal). With the help of social movements, education was secured even for the girl child. By the time I was born, I had four or five generations of women in my family who were educated before me. I inherited the luck of being exposed to the versatile ideas that came to be known as Bengali culture.

Also read: Dear Bengalis, Our Multiculturalism Is In Danger, And Only We Can Save It

But the current situation and Bengal’s colonial baggage must have some links. Bengali culture has a lot of introspection to do. The culture that I was born into – and I – have to recognise our own privileges, learn, unlearn and evolve. We have to understand our poor performance when it comes to social justice issues and human development – SC, ST and minority populations constitute most of the poorer sections of Bengali society. We have to ask ourselves how, despite Brahmo Samaj (which is still active) and the communist movement, we failed to address the caste and communal questions. I think one of the reasons that Bengal failed itself is because it borrowed western ideas that were neither understood properly nor adapted to the unique social dynamics of Bengal and India. The leadership, till date, continues to consist majorly of upper-caste Brahmins and Kayastha Hindus, with a representational minority that has always been a bit of a tokenist joke.

Yet I see a lot of merit in the idea of the Bengali culture. I call it an idea because all cultures are just that, and therefore they are constantly interacting and reinventing themselves. I am not so obsessed with the idea of the particular culture that I belong to or represent, but I am obsessed with the idea of culture itself. Therefore, in these tumultuous times when being Bengali is often a matter of inviting deriding comments,  slight resentment, or even an outright irritability, I feel a greater need to be a Bengali and defend this against the onslaught.

Since Tagore and Ray’s memories were reduced to nostalgia, and a flickering hope ushered in by Rituporno Ghosh was extinguished prematurely, Bengali intelligentsia has been reduced to ghettoised circles unable to transcend their haloed urban networks. Private schools such as mine have completely destroyed a competent grasp of our native language. It is time Bengal reinvents itself and we delve deeper into what it means to be a Bengali.  And finally embracing our Bengali identity and being okay with it. Not proud, because that leads to cultural snobbery which many Bengalis are guilty of; nor ashamed – especially if we acknowledge our inherited privileges and deep-rooted bigotry and other issues, and are ready to undertake the long and tenuous journey to transcend them.

Especially in these disturbing times when one idea of culture, nation, religion is being imposed on everyone, Bengal must resist this politics of aggressive homogeneity. A Bengali is not by default an upper-caste Hindu: they can be a Muslim, a Christian, a tribal, a Dalit. A Bengali is not by default from Kolkata, or connected to Kolkata, either. A Bengali can be as much a Delhite, or a Bombaywala, or even from Timbuktu or Jhumri Telaiya, as much as from Tokyo or Boston. A Bengali can be a hater of fish and a lover of rasam (like me), a Bengali can be fluent in Tamil or Chinese, a Bengali can be uninterested in intellectual pursuits and more of an adventurer. A Bengali may not always carry an umbrella or a monkey cap or Gelusil, may instead carry a smartphone and their partner’s photo in their wallets. A Bengali is after all just an idea and who knows what an idea can be.

I know what being a Bengali meant to me. It meant I grew up invisible to caste, communal, gender and sexual issues which made me an ignorant prick that my friends in my master’s program had to deal with and cure (and are still curing). But I also grew up keen to know and to love the “other”, actively seeking out the other. I owe that to the combination of the Marwari school I despised, the diverse neighbourhood I grew up in, and most importantly, my college. 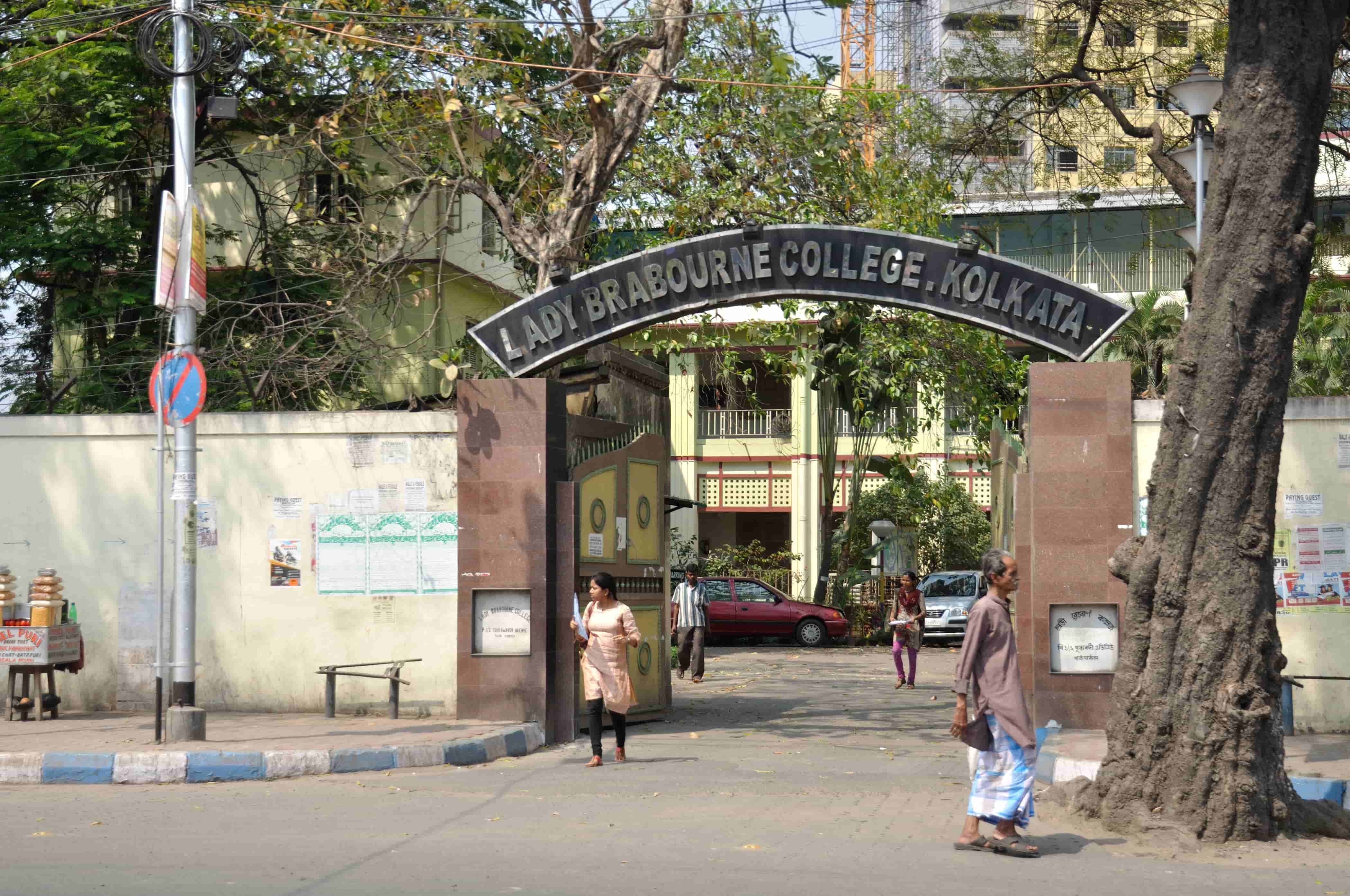 Lady Brabourne College was established in 1939 to educate Muslim girls in an area with a large Muslim population (or, in non-polite terms, Calcutta’s Muslim ghetto), Park Circus. It later opened up for other students as well and expanded its academic scope. I interacted with young girls who came to college in burkhas, saw them keep their burkhas every day in the cloak room assigned just for that, and then at the end of the day wear their burkhas and head home. I had the most delectable biriyani in Arsalan, saw the janazas (funeral processions) on the streets, and life in general. It was a treat planning outings after college to places where the ghettoised Muslim Calcutta connected to the anglicised shopping hubs like New Market; trips that were no less important for us newly independent youngsters than pilgrimage is to others. I questioned certain things, but Lady Brabourne, which offered courses like Arabic and Persian, taught me respect. My bachelor’s subject, sociology, further taught to me to be sensitive. My university gave me one more gift, to question and to be critical.

The need of the hour is to be critical of the tradition that, for me, once meant opening one’s arms, eyes and mind to everything that is new and unknown, eager to understand the ’foreign’, the hippie souls of the east. Clearly, the crisis in Bengal is an indicator that we have failed and we suffer from superficiality, from unchecked privileges. There is a problem as clear as day, that we have refused to acknowledge. We have communist leaders who unhesitatingly switch allegiance to the rising saffron tide. Even before the saffron tide came over, their positions Durga Puja celebrations, and on caste and communal questions, were rather sinister. The Kolkata-centric elites and ruling classes, the rampant caste based matrimonial ads, the in-your-face misogyny, they were there all there all along. It just goes to show that we are no better than anyone else. Therefore, the riots that are going on are a clarion call for Bengal and for whatever it means to be a Bengali, suggesting that we reclaim and reinvent what is ours and who we are – our culture and our identity.

It is time that we rethink and redefine what it means to be a Bengali today. In my opinion, it is to be someone who may not like fish or sweets, but does not tolerate being told what they can or cannot eat. It’s okay to speak and think in a language that’s not Hindi and resist the imposition of Hindi as part of a larger agenda of aggressive homogenisation. To be Bengali may mean to be an atheist who may or may not post anti-religious posts on social media, but will speak up when a virtual post is turned into an excuse for real violence. To be Bengali means living with different languages and cultures (on average, a child born in a Bengali household will grow up knowing three languages, Bengali, Hindi and English). To be Bengali means you may or may not be from Calcutta or Bengal, you may be straight or gay or bisexual, you may be transgender, you may be into tennis or chess more than football, you may love the outdoors, you may not spend your days reading and writing. To be Bengali may mean to worship Durga, and still defend the rights of communities who worship Asur and think of Durga as evil. To be Bengali is to be diverse – and to continue in that pursuit.