When Facebook Sexism Meets Toxic Nationalism In The Name Of Comedy

By Arunima Singh in #NoPlace4Hate, Sexism And Patriarchy

Pepe, the frog might be dead, but sexist and racist humour is here to stay, apparently!

Sometime around the evening of June, 5, I spotted a post in this Facebook group which had the picture of a man in the Indian jersey with his arms on the shoulders of a woman in the Pakistani jersey. The joke was in the caption, which read, “So Pakistan is getting fucked even after the game.”

A discussion was already going on, where another girl had pointed out how disgusting the post was, which to no one’s surprise invited some more carefully crafted words (with insights on how to stalk the poster’s profile) from people who were like abusive trolls. I couldn’t help myself but respond to that post, calling them out on their nonsense, and telling them the reason more people or even women don’t object is because they don’t want to indulge in this or put themselves through this madness.

Their reaction, to a great extent, involved calling us crazy ‘feminazis’, and even casually asking us to leave if we weren’t okay with these jokes. Yes, because why make inclusive spaces when you can more easily kick out those who disagree! The creator of the post was especially notable in his response, saying he realised and apologised for that miserable post in the name of a joke, but people had taken notice and liked it and what could be a greater achievement than that! 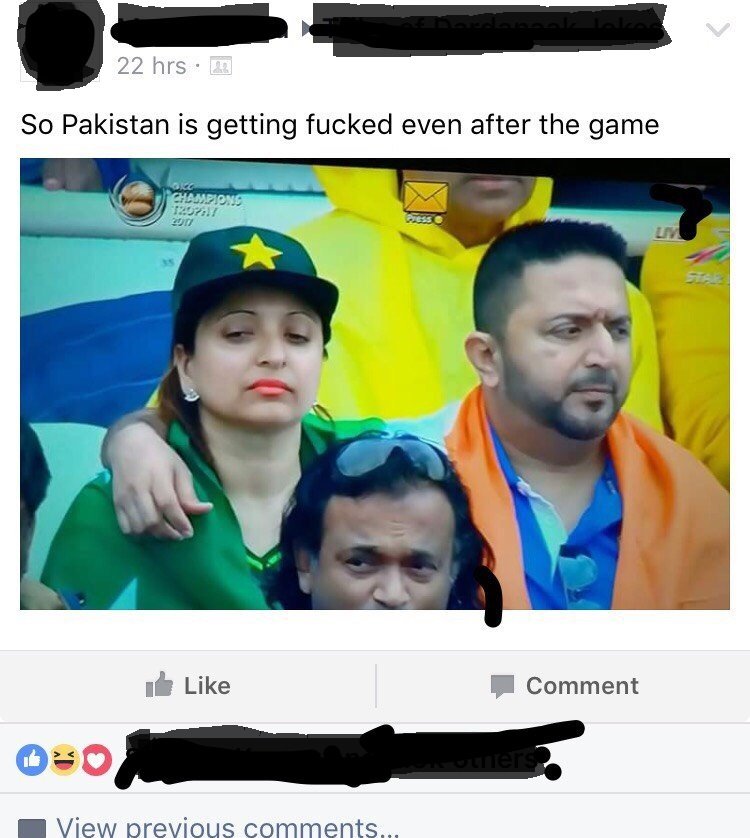 After that, I took a screenshot of the post and shared it on my wall, asking why Indian men would find this post funny. It had around seven options, suggesting reasons why or how someone could find it funny. The brilliant post creator then shared that post in that same group, because where else do trolls come flying by in numbers so great to reassure a shameful misogynist’s fragile ego?

Once again, most of them had no interest in reading the post and quickly posted in comments how I was ruining ‘their’ group and making a fuss out of nothing. I was, for some reason, being a sport about it and trying to respond to all these trolls with their repetitive commentary as respectfully as possible. A large number simply said, ‘admin ban her’, and I thought that was really funny. Only, that went on for a while, till the poor admin, seemingly hurt by being subjected to more than five words in a sentence, decided to block me. It was a little shocking, I’ll admit. You expect wit from even the most pathetic of comedians. Clearly, I misunderstood the standard of these jokers.

That didn’t stop these hoards of men from sharing this post with captions like, “You are stupid”, “Feminazis at it again” and so on (before you criticise me for being sexist, I did experience it only from men on my post, as much was publicly shared). None of them had any answers though. Not one could tell me how victory was equal to fucking and why it was funny to them. I was intrigued by all this and checked some of these posts, and of course, there were women rationalising that joke too, saying there were bigger problems than these jokes, and that I was ruining sex for women.

Really? Was I? If your logic is that sex is great for both the sexes, how do you take an issue with me, and not with the post that simply says, “So Pakistan is getting fucked even after the game?” Since you don’t get what that caption suggests, let me break it down for you:

I do realise why women laugh though. It’s for the same reason they laugh at rape jokes and belittle other women. To fit in. To be cool, as opposed to a ’raging feminazi’, which you automatically become if you dare point out the prejudice in that statement. It is years of socialising and social conditioning that has taught you what you should laugh at and when you should shut up, and I get it.

But do try and understand it is 2017. You shouldn’t have to be cool for men (or women) who have the sense of a toad, and the humour of a monkey, clapping and laughing the hardest at the jokes which are most obvious. You deserve better jokes.

I understand that India vs Pakistan matches brings all our emotions flooding out. And while we are still feuding like we are in the 70s, there is no need to joke like we are in the 70s. One of the most important tasks of someone who dares call themselves a comedian is to keep themselves well-informed and recognise things for more than what’s on the surface.

On one side of the planet, Bill Maher is apologising for using the n-word. And still, there are people asking for his resignation. And here we are, being told that widespread misogyny combined with toxic nationalism is funny. When you crack this joke, you take us all back to the archaic, and rather disturbing notion, of women as nothing but a vessel, and penetration as a violation. How funny would it be if the woman was in the Indian jersey and Pakistani men were saying, “Well, they fucked us in the field, we will fuck them off it?” That would have been the joke then, and you wouldn’t be laughing. And before you cringe and complain about such ‘safe spaces’  where these jokes are okay being taken away, well, black people, women, and minorities have kind of struggled really hard to try and do just that. Why must we draw the line on Facebook and let it go? Harvard didn’t.

People on both sides need to calm themselves down. Go watch something else if you can’t handle cricket. If winning against a team that drops four out of five catches gives you such a high, you clearly have more alarming problems than a loss or victory in a cricket match. And if my asking you as to why you drag women and sex into it is good enough for you to ban me, the only thing funny about you is your understanding of ‘freedom of speech’.  It isn’t just supposed to be the freedom to spit out anything that comes out of your mouth and repeat the same sad jokes you’ve heard since you were born. It is also about letting the other person talk when they disagree with you. But hey, since you clearly can’t comprehend, why bother? Block and ban all the way till you don’t have anything to read and hear but Kapil Sharma translated in English!

At a time when female comedians are finally getting some well-deserved attention and the sexism present in Indian comedies is being acknowledged, you are going to have to try harder and crack a real joke. At a time when comedy is developing and becoming all it can be – among other things, our only respite from the joke that is electoral politics – I will not let a bunch of pathetic internet trolls tell me this is funny. It is not. As an ardent watcher of cricket and comedy, I will not sit and laugh at another one of these sexist jokes to fit in.