IBPS PO Recruitment 2017 Official Notification is going to be released by IBPS after a long wait. With the arrival of authority notification, IBPS PO Recruitment 2017 will be going to start soon. The Online Registration for IBPS PO 2017 will begin probably in the month of August 2017. IBPS has presented 3562 opportunities for the students going to give IBPS PO 2017 Exam. IBPS PO Recruitment is probably going to increment as 4 banks have not yet announced about any opportunity. A noteworthy change has been seen in the Mains Exam of IBPS PO 2017 according to the official notice. Much the same as SBI PO 2017, IBPS has presented an illustrative paper in its mains exam for determination of contender to the post of the Probationary officer.

>> Students who are interested to fill the form of the IBPS 2017 PO Recruitment must have a certificate of any known university or board.

>> Candidates who are in the last year or the last semester have to submit the mark sheets then only they are filing an application on the official website of the IBPS.

Estimated salary of bank PO is 35,000 – 40,000 and it might differ bank to bank. So, students, IBPS PO Recruitment 2017 is going to fill on the official website of the board where you have to give their details while filling the online application form. 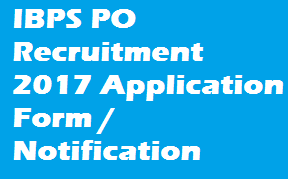