As A Bachelor In Gurgaon’s Essel Towers, This Is The Disgusting Moral Policing We Face

By Submitted anonymously in #BHL, My Story, Sexism And Patriarchy, Society, Staff Picks
Editor's note: This post is a part of #BHL, a campaign by BBC Media Action and Youth Ki Awaaz to redefine and own the label of what a 'bigda hua ladka or ladki' really is. If you believe in making your own choices and smashing this stereotype, share your story.

“You are no one, we live here, we have paid for these, speak to us via your landlords.”

“Youngsters create a ruckus in the society.”

“You tell me your landlord’s name, I will tell him you support prostitution.”

Chances are, if you are, or have ever been, an unmarried working professional living away from your family, you have heard similar statements coming from the friendly neighbourhood sanskaar brigade.

I have been a resident of Pilot Court, Essel Towers for almost two years now. On Friday, August 4, as I walked into the society, I saw that an agitated crowd had gathered at the entrance of my block. I was concerned. Had there been an accident? Did someone commit a crime? Were the police called for some reason?

As it turned out, this was no accident. What was happening was that, all of a sudden the members of the managing committee of the society had decided that tenants who are unmarried will not be able to have guests of the opposite gender in their houses. Naturally, several tenants (men and women, both) had gathered downstairs to protest the rule.

There were a group of people arguing, shouting, making videos of each other.

Along with heated arguments, some people were genuinely trying to have a dialogue with the managing committee members and guards, but they were in no mood to listen.

A friend who had his sister visiting him for Raksha Bandhan was told that she wouldn’t be allowed in, despite the fact that he offered to show ID proof and asked the committee member to speak to his parents. In fact, the lady he was trying to reason with said, “You can’t make me speak to someone I don’t want to speak to.”

During the course of the evening, the argument began at 8 pm and ended approximately at 2 am. People were pushed and shoved by the committee members, phones were snatched and thrown, and self-righteous statements were made.

The worst of the lot though was probably when one gentleman thought it was okay for him to accuse a female tenant of “supporting prostitution in the society.”

Since then, the society has been in a state of turmoil. We’ve seen a notice that says “Visitors, other than immediate family members (blood relations) are not allowed after 22.00 hours and before 8.00 hours (and not allowed to stay overnight).” It is dated August 5, 2017, but states that these rules are effective from August 1, 2017.

It is worth noting that this notice was not circulated to us, as is ordinary residents, but was seen by accident by one of the tenants. It is also worth noting that some of our visitors have been denied entry into our homes after this incident, even in broad daylight. The guards in the complex have been given lathis and have been instructed to use force if we do not comply with their ‘rules’. 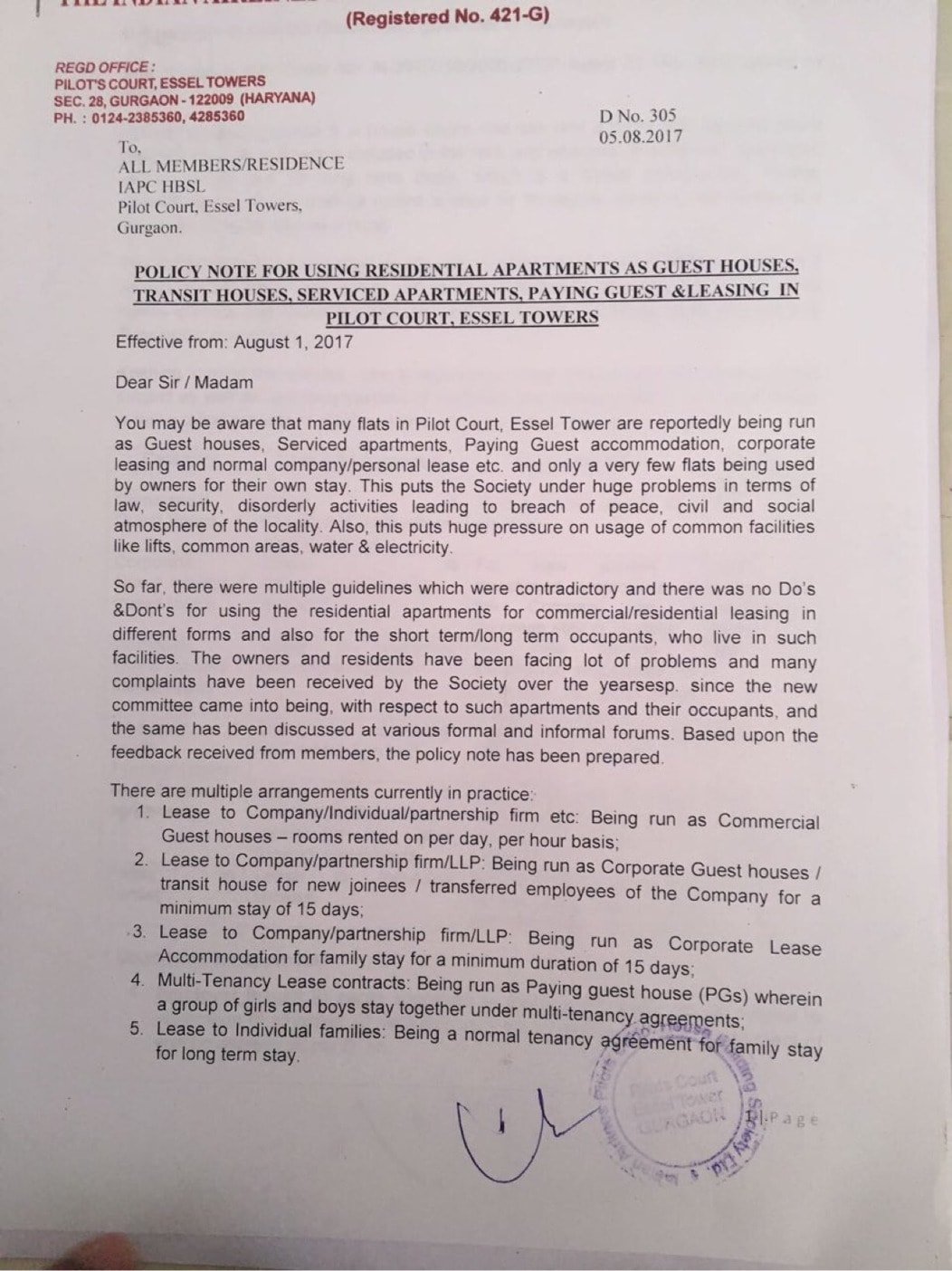 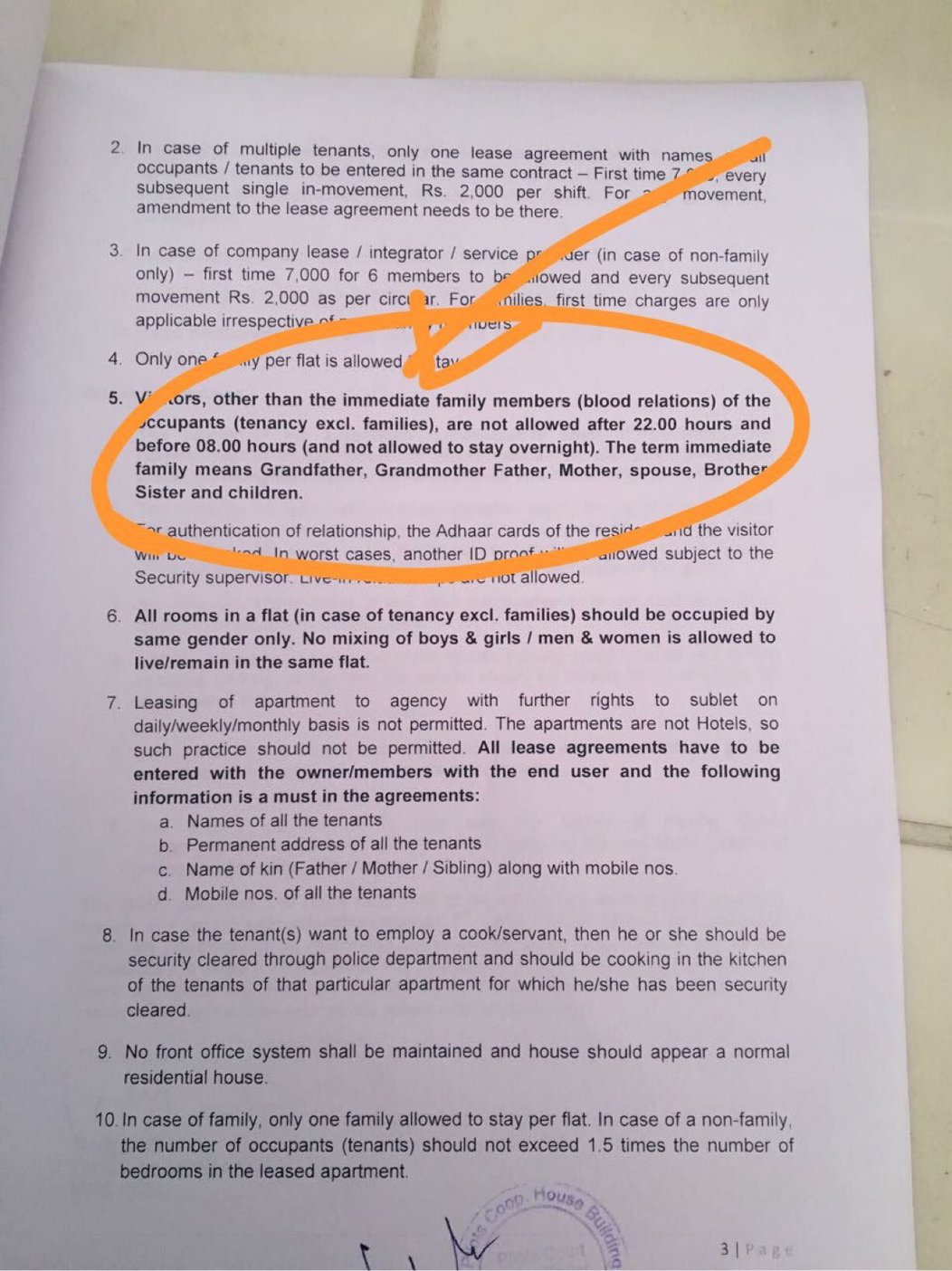 It wouldn’t be an understatement to say that this kind of behaviour and mentality is reminiscent of khap panchayats. The only difference is that educated, prominent members of our society choose to adopt this regressive outlook.

So what exactly is the managing committee’s issue with the tenants?

Managing committee members have complained to the media about the ‘loud music’ and ‘parties’ that happen in flats occupied by bachelors.

Of course, the first question is, how is restricting the entry for the opposite gender a solution for loud music? Isn’t it enough for the committee to make rules for music and parties? They can warn people who play loud music and on persistence ask their landlord to deal with their tenants or get the apartments vacated.

People living with families also play equally loud music on occasions and the bachelors get equally disturbed. So why is it only a disturbance when bachelors play loud music or have parties?

This seems to be the biggest theme around the new restrictions.

On what basis has the managing committee arrived at this conclusion? Is it because, as adults who pay rent for our homes, we choose to have visitors of the opposite sex? Because sometimes our friends stay over at our houses?

The society has a total of 15 guards, 24 hours, from entrance to exit, over a distance of 100 odd metres. There are five or six more guards on the road and at the main gate. It is hard to imagine illegal activities happening under their noses. Plus, they seem to have recognised the prostitution related events. Being moral citizens, they should have reported this to the police to catch hold of the culprits.

Why does the action of one bachelor define everyone who is unmarried? How do all bachelors become a part of “you guys”? I didn’t sign up for that? There is no bachelors’ welfare association. Is there?

It is ridiculous to attribute the behaviour of a few (again, not proved or reported, just assumed) to the marital status of 75% of the residents and put a ban on their rights.

Note: Youth Ki Awaaz attempted to contact the managing committee of Pilot Court for a statement. We only received a response from Capt D S Giare, who was a member of the committee until March 2017. He dissociated himself from the actions of the current committee, stating that he is not against visits from guests of the opposite sex. If and when current members choose to respond, we shall update the article.
_