‘Arjun Reddy’: A Telugu Film That Tries To Beat Misogyny With Misogyny

By Avinash Matta in Culture-Vulture

This review is filled with spoilers and reveals major plot points from the film.

“Arjun Reddy” is no longer just a film. Within two weeks of its release, it has become a major sensation. It is being called a cult film, a path breaker and a trendsetter by many. Vijay Deverakonda a.k.a Arjun Reddy is being worshipped by students and youngsters as the new hero.

While a majority of the audience can’t stop singing praises about the film, there are quite a few who are talking about why this film is deeply problematic. While I can appreciate a few aspects of the film, I cannot disagree with the criticism either.

Firstly, let me make an honest confession. I am not a regular Tollywood movie goer. Being born and brought up in Andhra Pradesh, I have watched a fair share of Telugu cinema and followed the changing trends of Tollywood in the past few years. I don’t run to the cinemas every Friday to catch the latest Telugu film but whenever a movie receives critical or commercial acclaim, I try to catch-up with it.

I watched “Arjun Reddy” for three reasons: Firstly, it has been receiving a lot of attention and I decided to check if it is really worth it.Secondly, I have admired Vijay Devarakonda as an actor ever since I saw him in “Yevada Subramanyam” and “Pelli Choopolu.” And thirdly, because this friend of mine with whom I talk all the time threatened to stop talking to me if I didn’t watch it.

So I landed up at IMAX for an afternoon show. And here’s my take on the film.

Throughout the first half, I was cringing and yawning, hoping to get a cup of steaming hot coffee to make me feel better. The movie has a sleepy pace with not much happening in the first hour. All we know is that Arjun Reddy is a brilliant medical student and a topper, but has major anger management issues. He is respected throughout the college by his professors, friends, and juniors. An argument with the college dean after a rough football match provokes him to leave the college until he comes across the love of his life – a young docile girl who was walking to get a cup of tea, preceded and followed by two other girls. This very scene sets the conflict between the two characters – Arjun Reddy is a free spirited and brave fellow who, at that very moment, decides not to leave college while Preeti Shetty, his love interest, is an almost dumb girl who is simply following the herd. Arjun is a rebel with a cause while Preeti is a part of the herd. She dim wittingly follows the girls to get her cup of tea but steals innocent glances at the handsome Arjun.

Now Arjun decides to not only stay back in college but he lets all his juniors know that Preeti is going to be his girlfriend. He storms into a classroom on the pretext of announcing a medical camp and using the shield of language warns all his juniors that nobody is supposed to date Preeti. He also tells them to let all the other students know that Preeti ‘belongs’ to him.

A few scenes later, he storms into Preeti’s classroom and asks her to step out with him. He begins taking her classes by drawing anatomy patterns on her hand. On one occasion, he also leaves a gentle kiss on her cheek. All through this, Preeti remains silent without a word of protest, like a docile calf who doesn’t know anything but to follow the herd. She simply follows his commands.

We don’t know much about Preeti as her character is under-developed but we presume she is gradually falling in love with Arjun and she realizes this when Arjun fights with the guys who abuse her.

Until this point, the film is highly misogynistic and problematic because it shows an alpha male forcing his love on a young helpless girl. But the director gradually turns the tables. While Arjun might have kissed Preeti on her cheek and forced his love on her, he never dares to touch her without her consent. He waits patiently for her Preeti’s consent.

After a long ultra-sweet tale of young lovers sinking into the abyss of romance, one fine day, Arjun and Preeti are caught kissing on Preeti’s terrace by her father who then slaps Arjun and throws him out of the house. This is when Arjun questions the father on the label of marriage. If they were caught kissing after being married, nobody would have a problem but because they are not married, they are being judged and ridiculed. But the truth is that Arjun and Preeti are already emotionally married to each other. So why judge them? Arjun puts across his point very sensibly and boldly here. But Preeti’s father, the antagonist of the film, won’t budge.

Arjun is angry and provokes Preeti to speak up, he says ‘be a woman and go talk to your father’ but poor helpless Preeti can’t utter a word in front of her father. Arjun gives an ultimatum – if Preeti is unable to make up her mind in six hours, she will lose him.

After six hours, Arjun doesn’t receive a message because Preeti doesn’t have access to her phone anymore. So Arjun injects himself with a dose of morphine and passes out for two days during which Preeti is forcibly married off to another guy from the same caste as hers.

Arjun Reddy, the brilliant medical student, and a topper, now transforms himself into a contemporary Devdas. He becomes a drug addict, an alcoholic and frequently visits prostitutes. What he does when he visits prostitutes is unclear because the first time we see him in the bedroom of another woman, he threatens her with a knife to undress, but in the later scenes, he is shown celebrating Ram Navami, Dussehra, and Diwali with other women.

During this sob-sob period, Arjun hits an all-time low when he collapses in the operation theatre while performing a surgery. While it is to be noted that he didn’t want to perform the surgery in the first place, he had informed the nurse that he is drunk and cannot do it, but he helplessly ends up doing it and lands amidst a major controversy. His daring confession in the legal room makes us empathize with him and probably demands an element of respect because he chooses truth over everything else.

Now, this is the problem with Arjun Reddy. He is bold, courageous and truthful. He speaks his mind without any fear or regret. He is not shy to shed a few tears on the screen. He talks about PMS and educates his friend on how to support a woman during her periods instead of leaving her alone. Through the climax, when he meets Preeti again and discovers she is pregnant, he is willing to accept this new flesh and blood as his own child and have her back in his life. This is the path-breaking Arjun Reddy who goes against every societal norm and a conservative view of masculinity.

For a country that’s heavily obsessed with religion and that worships Lord Ram, the king who banished his pregnant wife on the basis of baseless gossip, Arjun Reddy is a bold new man because he dares to accept his pregnant lover who is married to another man and who, probably is carrying another man’s child. 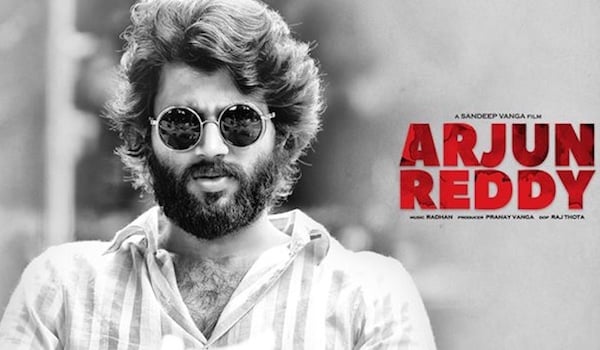 But Sadly, We Cannot Make A Hero Out Of Arjun Reddy.

In India, we don’t just watch films but we consume them and we restructure our lives based on films. When Shah Rukh Khan stands on a hilltop and stretches his arms wide open to propose to his girlfriend, every SRK fan follows suit. When Salman Khan declares his love for a girl by changing his hair style, every self-proclaimed ‘bhai ka fan’ does the same. And when Arjun Reddy walks back into his college and decides to choose his girlfriend without asking her, there is a risk that this could become the new way of choosing a girlfriend. This is why Arjun Reddy as a film is deeply problematic.

While Arjun criticizes his friend’s brother-in-law for objectifying women, he himself forces Preeti to befriend a fat girl because ‘fat girls will be loyal friends’. Isn’t labelling a girl fat objectifying her? While he waits patiently for Preeti to make the first move, his gentlemanly gesture here is highly questionable because he never gave her the option to choose him in the first place. He chose her and forced his love on her. So is it okay to be a gentleman and respect women after you forcefully get into a relationship with one?

Now, some people might argue that Arjun changed as a person after he fell in love. He began to respect women after discovering love. Does this mean it is okay to objectify women until you find love in life?

Also, how can an alcoholic and a drug-addict recover from his habits so easily? After he loses his grandmother, Arjun Reddy is suddenly a changed person. The film makes de-addiction look so effortless that it will send wrong signals to all the students watching the film. These young minds won’t hesitate consuming alcohol and drugs, probably because Arjun Reddy gets over them so easily later. Poor souls are being deceived by the filmmaker!

What adds to the pathos of the movie-goer is that, during all this, we hardly know anything about Preeti Shetty or the heroine who falls miserably in love with Dr Arjun Reddy in the second half. Both characters are modelled after Paro and Chandramukhi (of the Devdas fame) and are half baked characters with hardly any opinions of their own. This film is about Arjun Reddy and Arjun Reddy alone, not about Preeti or another character. Even during the end, when Preeti miraculously reveals that she never let her husband touch even her little finger, we are left to wonder how she could have possibly managed that. The woman who couldn’t speak a word when Arjun forced her to walk out of her classroom, or in front of her father who got her forcibly married off to a man she didn’t know – how could she defy her husband, leave her in-laws and begin to live independently as a pregnant woman hoping for her boyfriend to come back and claim her one day?

The lines of right and wrong are blurred in the film and it is unfortunately left to us, the audience, to decide who is Arjun Reddy. Is he the new path-breaking Tollywood hero who talks about respecting women and is willing to accept his girlfriend post her marriage or is he a falsely justified reason to storm into a college and choose one’s girlfriend without her consent?