By Zeeshan Kaskar in History, Politics

In this era when the Congress is hated (justifiably so, in my opinion) and there is mostly a pro-right wing atmosphere, people have started to believe things they see online – which are by no means unbiased – and we have started hating our first (and according to me, our best) Prime Minister.

Pandit Nehru, in recent years, has undergone a tremendous amount of criticism. It is mandatory to face criticism if you’re a politician, but the criticism of Nehru borders on hatred. He lost the love which Indians had for him. At the time when he was alive, he was probably the most loved man in India after Gandhi. The defamation started after his death.

There are multiple reasons for the downfall of Panditji’s popularity. He was never really fond of the RSS and the organisation was banned after Gandhi’s assassination – just for a little more than one year though.

In the previous decades, people in India have taken a more favourable view of right wing ideology, which explains few things.

Secondly, the failure of the Indian National Congress (INC) post-Indira Gandhi has created a tremendous amount of dissatisfaction in the minds of citizens. The Congress of Nehru and the Congress of Rahul Gandhi are poles apart. People generally confuse the two, which is another reason for Nehru’s deteriorating image among the general public.

These are the main reasons, although there may be many other perspectives too. The question I want to ask today is – if not Nehru, then who? 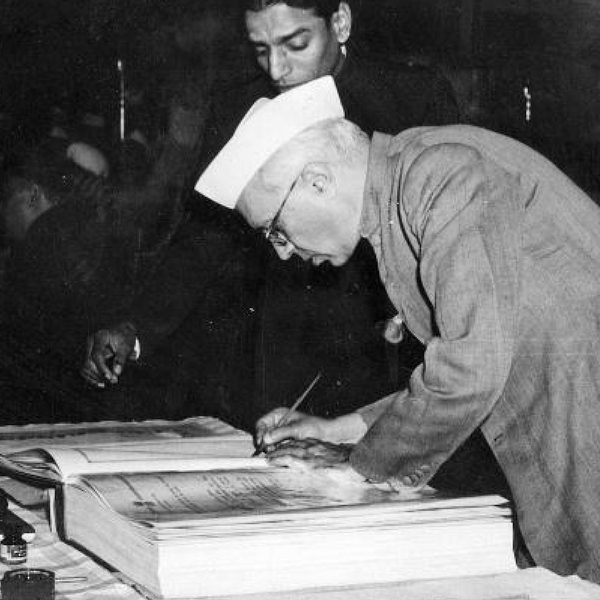 Who was capable of leading a nation with such a vast population? A nation which was probably facing the world’s largest human migration, a nation whose economy was going nowhere. A nation where communal riots were common, one with a nominal literacy rate – all in all, a nation with all kinds of problems.

As far as I’m concerned, Jawaharlal Nehru was the wisest person who could have led India as he was arguably the most moderate man, respecting all cultures and beliefs. He held tremendous amount of international respect due to his idea of foreign policy, because of his many visits to the European and Soviet countries, and his relations with the diplomats there.

His view of building educational institutions, (IITs and IIMs), realising their importance in the coming future, must not be forgotten. Nor his role in the formation of the constitution for that matter. He involved people from various ideologies in his cabinet, and took forward the idea of ‘non-violence’.

He, along with Vallabhbhai Patel, helped in keeping Kashmir intact. He had his way of dealing with criticism from the opposition – just read the exchange of letters between JP Narayan and Nehru. His idea of a nation like India was splendid. I cannot see any other politician equaling the heights of Nehru’s achievement.

One might argue that Patel was a better choice. He had his own disputes within the Congress party.

I have seen some people claiming that Gowalkar should have been the PM. I’m afraid our national flag then, would have been saffron-coloured. His rally at Shivaji Park, Bombay was attended by about one lakh people. The speeches were filled with radicalism with the touch of RSS in it. Whereas Nehru’s rally just next week was attended by more than six lakh people. This clearly suggests that Nehru was winning this battle of popularity.

For the horrific communal violence of 1946 and 1947 bore witness to the need for a strong centre. In the words of Kazi Syed Karimuddin, “Everybody is not Pandit Jawaharlal Nehru,” in respect to his commitment to inter-religious harmony. “What we want to-day is a stable Government. What we want today is a patriotic Government. What we want to-day is a strong Government; an impartial and unbending executive, that does not bow before popular whims. To-day there are weak and vacillating executives in all Provinces who are amenable to influence of the members of the Party and it is impossible for them to displease if they want to continue in the seats that they occupy.”

Also, we cannot forget the time Nehru spent in jail which resulted in great literary pieces.

Of course, mistakes were made by Nehru, especially during the 1962 China war. Nehru thought of the Chinese government as our well-wishers due to his slight inclination towards left ideology. But as the head of the country, everyone is bound to make certain mistakes.

I thought of writing this article due to the comments I get to read on social media. People might not be harbouring a negative view of Nehru in the future and as mentioned earlier, social media sometimes shows the false side. Regardless, there will always be people who know and realise the contribution Pandit Nehru made towards building our nation.