By Akshita Prasad in Gender-Based Violence, Media, Sexism And Patriarchy

A few months ago, actress Sonam Kapoor alleged that she had been groped by a stranger in a theatre back in 1998 at the age of 13, news that was disseminated like a rapidly spreading conflagration.

While her allegations were met with a few positive comments and appreciation for publicly discussing a taboo subject like sexual assault, and the hope that people would take this as a precedent for other victims of sexual abuse to follow, not everyone seemed to agree. Some commentators called this a ‘publicity stunt’ and expressed disbelief over the fact that an urban woman who comes from money could ever be the survivor of sexual assault, while others trivialised the issue or responded with apathy. The tone of the comments shifted from apathy to insults, but the fact that her experience was being invalidated remained. Here are some of those comments. 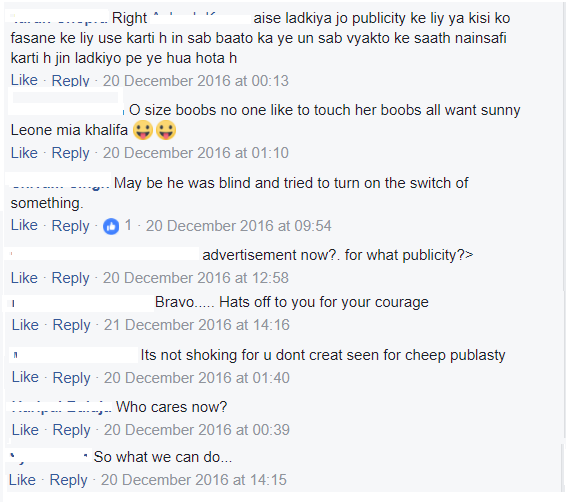 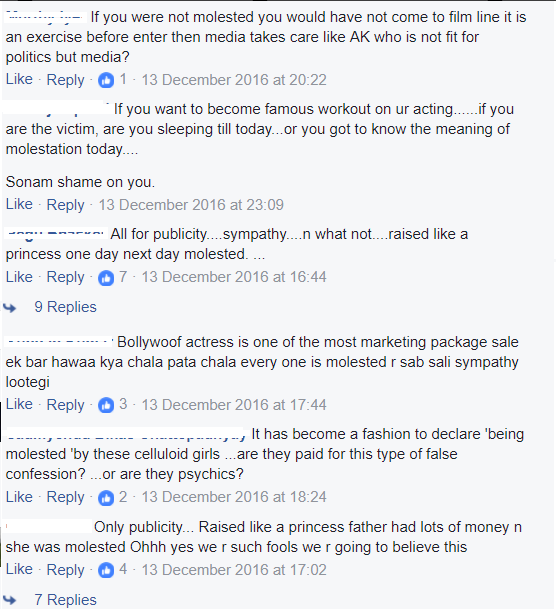 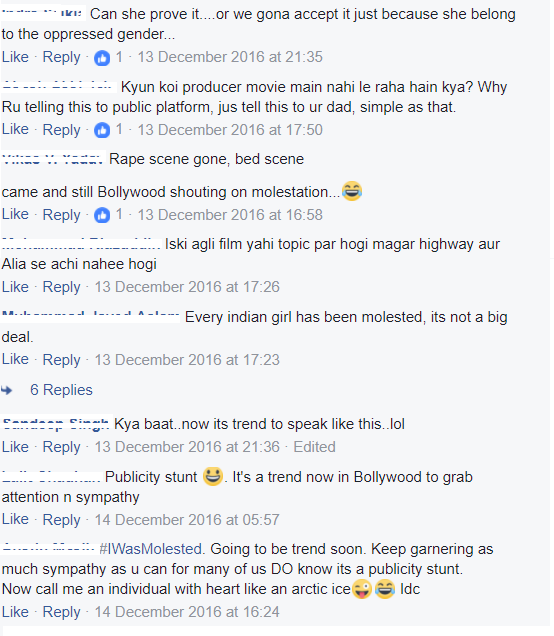 In light of these comments, we are confronted by our collective apathy towards sexual assault and our disregard for its survivors. The convenient dismissal of Kapoor’ allegations brings to the surface an issue we have been dealing with for years, the invalidation of experiences of survivors of sexual assault and the trivialization of sexual crimes.

As deeply troubling as this is, the issue runs deeper. Dismissing Kapoor’s allegations as ‘fake’ brings us to the deeper issue of our collective habit of shaming and shunning the survivors of sexual assault. Instances like these prove to survivors that their traumas can be disregarded and they probably won’t be believed, which can lead to them choosing to never detail their traumas or seek legal counsel. Our systematic silencing of survivors has given rise to a disaster, which in its wake has left bolder abusers who take advantage of the silence we force upon survivors.

It also seems to be embedded in our collective conscience that women in urban areas can’t be survivors of sexual assault by virtue of living in developed areas. We also seem to hold the false notion that sexual assault is confined to poor, rural areas that lack in education, despite plenty of evidence to the contrary. Sexual assault and all sorts of sexual crimes are still prevalent in urban areas of India, and in very large numbers.

The number of negative and insensitive comments to Kapoor’s allegations reminds us that we have a very long way to go in our quest to counter sexual assault and build a society that doesn’t blame the survivors of sexual crimes.

Challenge NOT Accepted: I Opted Out Of The Selfie Challenge Supporting Turkish Women’s Rights Campaign