Being Punished Twice For A Mistake By The Mumbai Traffic Police

First of all, I am a Mumbaikar and do realise that Mumbai is a very congested city. We don’t have the place to breathe. Where will the government provide space for parking a 2-Wheeler?

With all due respect to law and order here,  I have paid the fine everytime I was caught violating a traffic rule. But for the first time, I felt like I was being looted by the government in the name of collecting fines.

On October 7, I parked my Honda bike in the BKC area of Mumbai at one corner of the road. I was there for a company meeting, but unfortunately, outsider’s vehicle was not allowed inside the premises, and I was forced to park my bike outside, a little away from the gate. 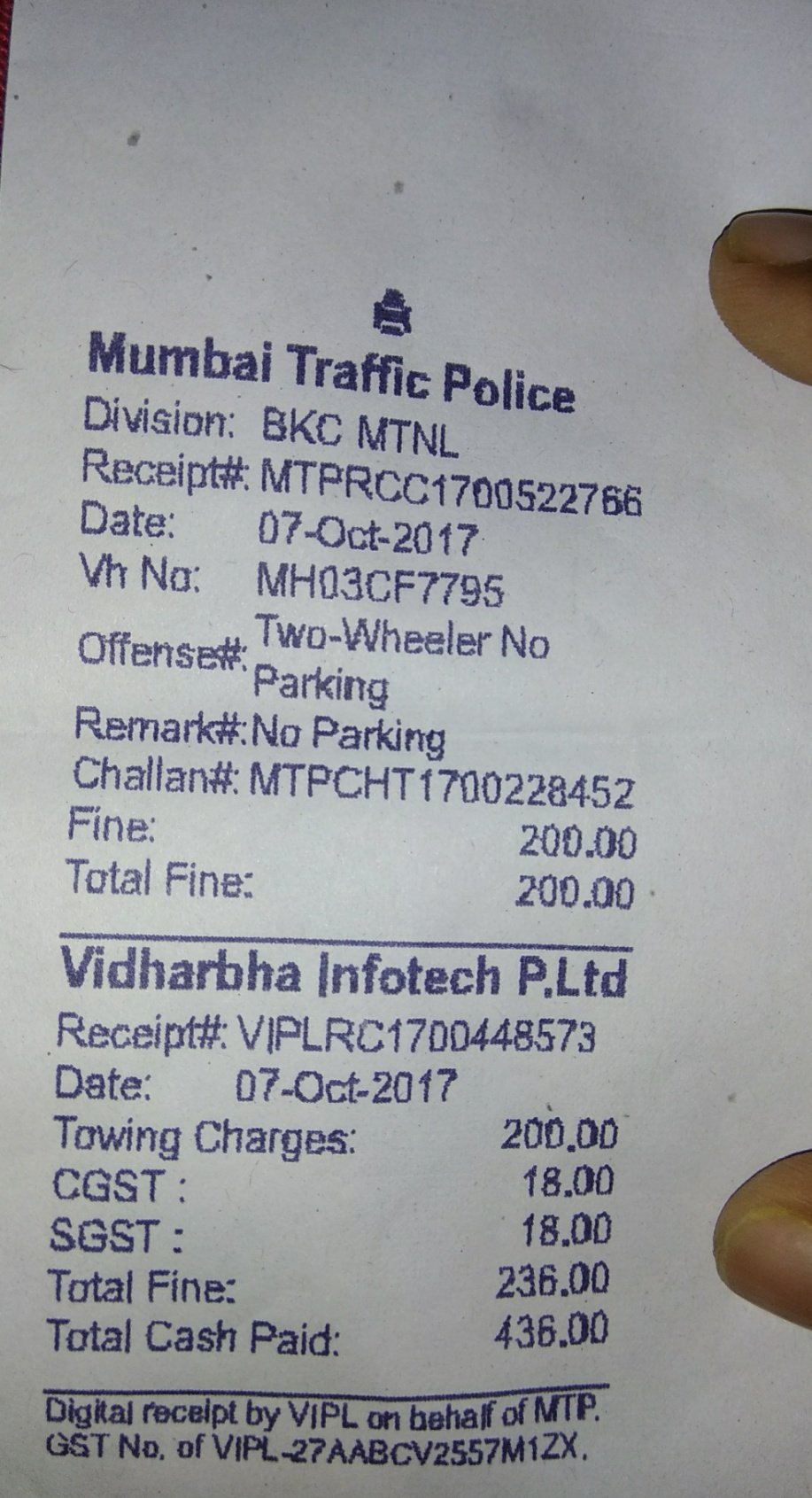 As expected my bike was towed. But this time, it was private firm named “VIDHARBHA INFOTECH PVT. LTD.”  who towed my bike and I don’t mind that either.

The standard fines for a bike towed in Mumbai city for wrong parking is ₹200. I was ready to pay that. But what dissappointed me is that is was not charged ₹200 but ₹436 for parking wrongly.

As seen in the receipt, ₹200 is the fine I was supposed to pay. But the government seems to be wanting people to stop using their private vehicles and start walking daily. I was charged ₹200 extra for being towed by a private firm, and then the cherry on the cake was the GST of 18% on that ₹200. As if the extra ₹200 bucks was not enough.

On enquiring, the officer said that they use advanced mechanisms to tow the vehicle and therefore they charge ₹200 extra. Moreover, since it is a private firm we pay GST on that amount! This sums up to ₹436 as my fine.

One simple question to the person who made this law.. Who told you to use automation for towing? You have been using it for your own benefits and then harassing people by charging them extra for being towed!

And it did matter to me therefore I brought this article up. Looting a common man and filling pockets of these private firms is not what we expected to be done #achhedin

I don’t mind being punished for a mistake. It’s only that I was slapped twice for the same mistake, and I mind that!

I am there for you: A poem for people struggling with mental illness