By Abhishek Singh in Politics, Society

“Gorkhaland is not just a demand for separate statehood; it’s a dream to be called Gorkha. We are fed up of being called ‘Chinese’ and ‘Nepali’. We are not that. We are Gorkhas who belong to India. And that is exactly why we want Gorkhaland.”

“GJM calls off stir in Darjeeling,” read a headline on the front page of a national daily, a few days ago. It wasn’t surprising that the indefinite bandh was finally called off because it had become inevitable once the new president of GTA (Gorkhaland Territorial Administration) had been appointed. However, what was surprising was the way the common man’s sacrifice of over 100 days was robbed by the privileged leaders for their political gains. Firstly, by Bimal Gurung, and then by Binoy Tamang for their own political mileage.

Why And How Did The Bandh Materialise

Early this year, Partha Chatterjee, the Education Minister of Bengal announced, “From now on, it will be compulsory for students to learn Bengali in schools. English medium schools will have to make Bengali an optional subject from Class I so that the students can study it either as a second or third language.”

It offered more than enough opportunity for the leaders in Darjeeling to start a protest for a separate state once again. Right from 2013, when Telangana was given statehood, the leaders wanting a separate Gorkhaland had been waiting for an opportunity. And that opportunity was finally served to them on a platter by the foolhardiness of Mr Chatterjee.

Mamata Banerjee, the Chief Minister of Bengal, tried her best to control the damage saying that, “I have never said Bengali will be made compulsory in the Hills. This is an absolute lie. You can have Nepali, English or Hindi as first language if you want. We want to introduce a three-language policy where students have to learn Bengali as an optional subject.” But the damage had already been done. 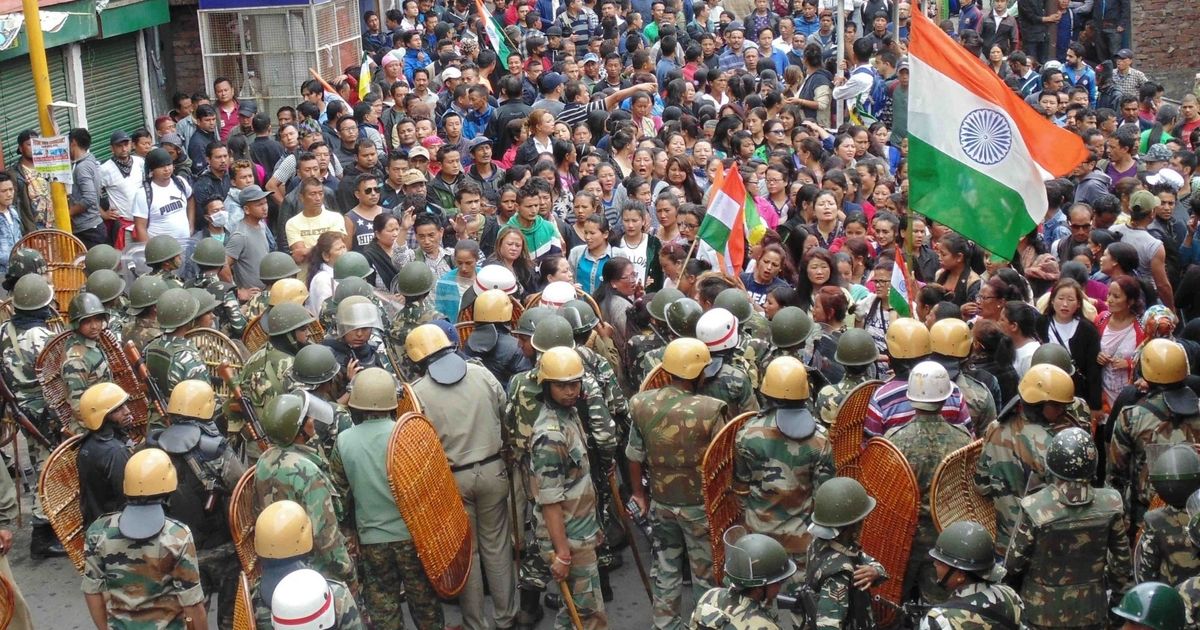 The unrest was soon converted into a protest leading to an indefinite bandh. Section 144 was imposed and paramilitary forces were deployed.

Then came the tool used by most administrations in the country of late, the dreaded Internet ban. Internet remained banned for since June 18 while the strike went on unabated. Local cable TV news channels were also banned.

Instead of pacifying the stir, all this led to its intensification. People were deeply annoyed because of all these dictatorial bans. They responded vehemently. There were cases of attempted self-immolation, of arson and robbery at government offices, heritage buildings and railway stations.

A Little Bit Of Background

Darjeeling was part of the Gorkha Empire which ruled the entire hilly region from Sutlej in the west to Teesta in the east. The British got the control of it after winning the Anglo-Nepal war in 1816.

However, the movement was intensified during the leadership of Subhas Ghising in the period of 1986-1988. The violent agitations of that period left almost 1200 people dead. After this, a separate body called, Darjeeling Gorkha Hill Council (DGHC) was formed.

In 2007, the demand was revived. It happened in the backdrop of Darjeeling hills being made part of the sixth schedule by the Central government in 2005. This would have made the region autonomous but a separate statehood would not have been realised. Hence the people protested. It went on for four years, stopping intermittently.

Why Should It Matter To Us?

The bandhs should not be seen in isolation. It is rather a conscious movement of the people for realising their long cherished dream of statehood. Darjeeling is very important as it shares its borders with two of our neighbouring countries – Nepal and Bhutan. Therefore, a problem in Darjeeling should be considered a problem of India as a whole.

Moreover, any crisis in Darjeeling has major effects on the following.

1. Sikkim: It is a geopolitically sensitive state for India as China keeps lurking by its borders. It is largely dependent on supplies from the Centre and its economy heavily relies on tourism. Any disturbance in Darjeeling not only hinders its supply chain but also paralyses its tourism industry as the only way to reach Sikkim is via Hill-cart road or NH 31-A which passes through the proposed Gorkhaland.

For instance, Sikkim’s tourism industry literally starved to death from mid-June to September this year. Its tourist graph came down from 1.2 million in April-May to virtually zero in July-August.

2. Tea gardens: Just as tourism runs Sikkim, tea gardens, combined with tourism, are the source of livelihood of the hills. Because of the bandh, the tea gardens, which were already incurring losses had to give bonuses to workers lest they run off never to return again.

The tea gardens of Darjeeling provide the best quality tea in India and is demanded all over the world. But with such long bandhs, it affects production and hence is a loss to the Indian economy and to the people of the hills as well.

3. Loss of life and property: Eleven people died during the bandhs. Two stations, Sonada and Gayabari, of the great Darjeeling Himalayan Railways, which is also a UNESCO world heritage site, were torched. Apart from that, the protests also caused a loss of income for the entire hill region as all activities were shut down.

All this has always led to losses for the people, be it of Darjeeling, Sikkim, or, for that matter, Silliguri and Dooars.

Be it the agitations of 1986, 2007 or the current one, it has only produced leaders who did not care for people’s rights and led them vehemently towards their losses financially and mentally. Rather than guaranteeing peace and tranquillity in the hills, along with accountability in the elected autonomous bodies such as DGHC and GTA, all they did was sow the seeds of unattainable and almost impossible statehood for their own political gain.

What Is The Way Forward?

Fueling anti-Bengal sentiments won’t serve the purpose. Being in power, even the BJP has realised that carving a Gorkhaland out of Bengal is not the ideal solution. This would lead to two major problems.

So what Kolkata needs to do is give real powers to the GTA. Making it a paper tiger hasn’t served any purpose till now and won’t do so in the future either.

The GTA should be given execution, financial and administrative autonomy along with legislative and judiciary powers. It should have an elected chief and subsidiaries. And Kolkata must realise that there is a difference between Gorkhali and Bengali. It would have to leave its autocratic approach. And the people of hills should perhaps then consider the GTA as their own govt.

This, according to me, is the only way out as of now. But the question here is whether both parties would leave their egos behind and reciprocate equally.  And whether the Centre would be able to play a good mediator.