GST And Demonetisation Have Crippled The Economy, And It’s Going To Get Worse

By ED Times in Business and Economy, Society

According to this report on Firstpost, the GDP for the April-June quarter was stuck at a pathetic three-year low of 5.7%. According to economists, this slowdown can be attributed to the recent changes brought about by the government. Specifically – demonetisation and the reckless and hasty implementation of GST (Goods and Services Tax).

A 7% increase was expected, and it would have certainly been an achievable goal, had it not been for the note-ban and the implementation of the indirect tax reform. 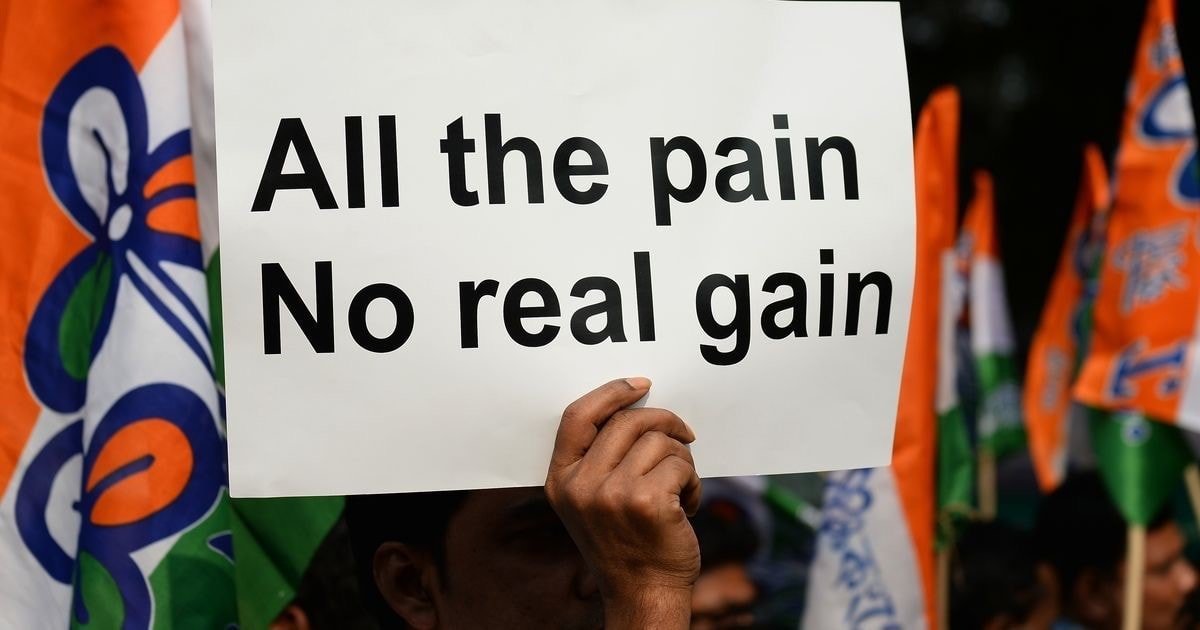 It has been close to one year since the demonetisation was announced by the government. And since then, the move has resulted in a massive disruption, especially in the rural and unorganised sectors, resulting in a massive increase in unemployment and a sudden decrease in consumption.

The informal sectors and the small-scale sectors that have been thoroughly hit are responsible for at least 50% of India’s GDP, if not more. The majority of the population in the country is found in rural areas and the informal sectors. And these sectors, being already distressed, have slid down the spiral, reducing the overall demand in the economy.

It has been opined that this series of Demonetisation and GST was preceded by back to back droughts in the country, which makes us question the timing of the conceptualisation and the implementation of these reforms.

Reportedly, the former finance minister Yashwant Sinha has said that an expeditious revival of the economy cannot be expected, at least not until after the next general elections, and that if the old calculation methods are used to calculate the GDP growth, then the same for the April-June quarter will fall farther to 3.7%. As per the Organisation for Economic Co-operation and Development (OECD), these surly after-effects that the implementation of demonetisation and GST have brought about will continue even into the next financial year.

It was also reported that trading companies had started de-stocking in the hope that they would buy up fresh stocks under the new tax system after the implementation of the GST on July 1, 2017.

But analysts say the re-stocking process being carried out by the companies is futile, and firms should rather wait for the GST system to stabilise before going full swing again due to its haphazard implementation.

This development being put into play just before the festive season, has further slowed down consumption by the consumers and is bound to impact GDP growth in the second half of 2017, resulting from massive ‘demand squeeze’.

A major risk of revenue shortfall is to be expected in 2017-18 due to the patchy working of the GST network (GSTN). As reported, the finance ministry received GST refund applications that totalled ₹65,000 crore for July, when total collections were ₹95,000 crore. And if all refunds are allowed, the Centre would be left with a minimal ₹30,000 crore when in actuality the net collections are budgeted at over ₹90,000 crore a month on average.

These glitches that have unceremoniously occurred since the software of the GSTN has been incorporated, showcase the shoddy implementation and the lack of preparation by the government before they decided to roll out of this ‘landmark reform’. The government, however, has been adamant in its stance that that the current economic slowdown only reflects the temporary ‘teething troubles’ of the GST, and moreover, demonetisation has been termed as a major step towards fighting corruption by the BJP, according to an article on Hindu Business Line. Inspite of the angle that the government is trying to give to demonetisation – of how it has been and will be good – no one can deny that so far it has just been a big fat disaster, and even known economists are backing up this point. Whether you take black money or you take terrorism, there has been no positive change in either of these areas.

In fact, all this has only resulted in the resurfacing of counterfeit money and robbing a couple of million daily earners off of their only source of income.

One could argue that demonetisation has introduced about 9.1 million new taxpayers, thus indicating an increase in revenue of the country, but unfortunately, this will not be bringing the kind of big and impactful change that we are being made to believe.

The said reforms obviously have ignored the interests of the ‘last man’, who’s faced the brunt and continues to do so. In a non-inclusive economy like ours, the social costs of attempted changes cannot be overlooked. The dwindling economic status of the population is bound to lead to overall insecurity, giving rise to ruptures in the societal fabric.

The government needs to shake off its state of denial, to admit and acknowledge errors towards rectification. Questions and criticism are increasingly being seen as pessimism and national disloyalty; a facet that poses grave dangers to the democracy. The dead habit of paying attention to conformists is certainly not the need of the hour to rescue the economy out of its current tailspin.