By Andaman tour travel in Society

It was during the colonial era when British officials realised the potential of rainforests in the eastern Bay of Bengal, which is now the Andaman and Nicobar islands. They nurtured a logging industry at the islands by making use of the lush green rainforest in the area. The flourishing wood industry made the British establish a forest department in 1883. This marked the need for elephants to drag the logs and they were thus imported.

Elephants were imported from different states of India like Kolkata, Madura and Mysore. These giants were transported in ships after ensuring adequate harnessing. They were lifted by a crane into the ships. A long voyage of five days was needed to ship them to Port Blair and at that era, the equipment was scarce. The present Andaman and Nicobar islands, which are one of the major tourist destinations, welcomes people on ships from various places like Kolkata to behold its eminence.

How fast has the world changed! Then, it was these innocent creatures who were shipped to carry timber and nowadays, arrangements are made for the tourists to reach Port Blair from Kolkata in a ship. Kolkata natives visit this place to watch the elephants brought from their land. 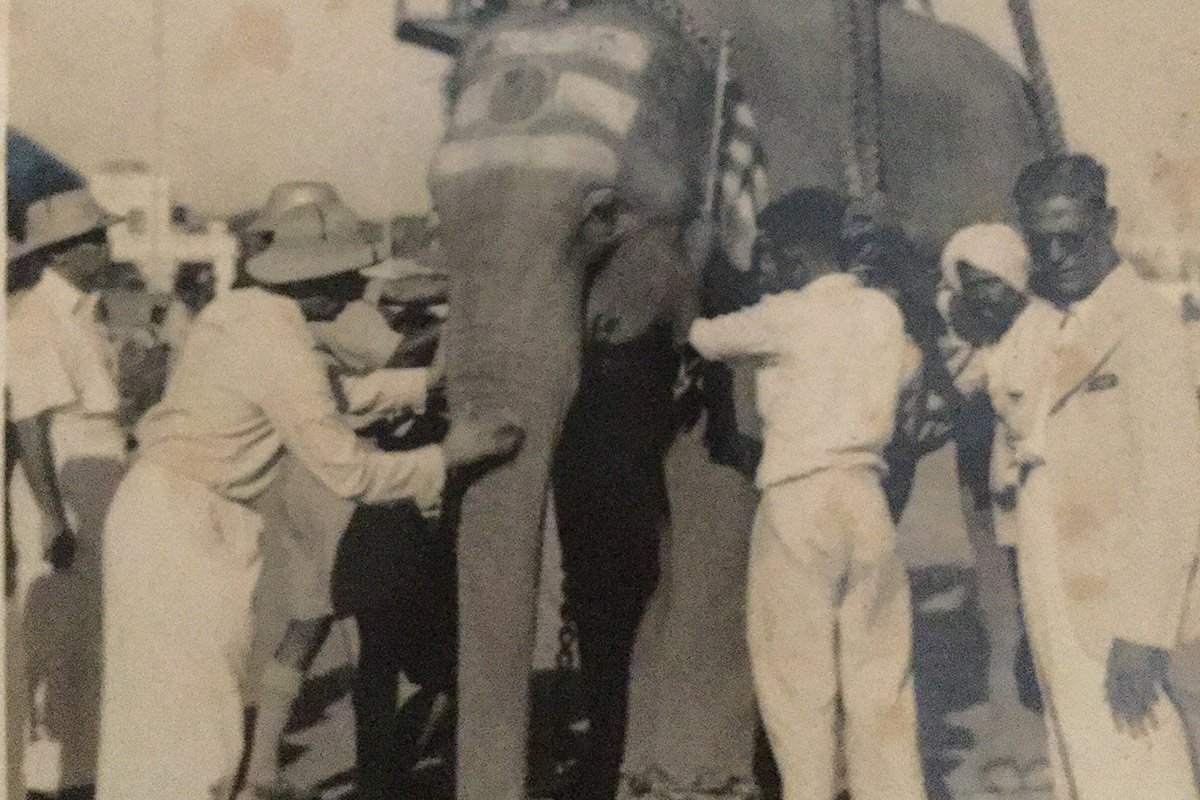 After these elephants were transported to Andaman and Nicobar islands in ships, (of which most of them died due to seasickness), there arose a need to transport them across various islands. There was no other option than to make them swim. It was at this point when the swimming elephants were born. Before the arrival of these elephants, there were other elephants shipped before World War II.

When World War II allowed soldiers on the islands, the elephants were freed from their stables by the officials for causing no harm to them. They roamed around the jungles and were few in number, most of them died too. The swimming elephants were born after that. All elephants have the talent to swim but only a few try it as they spend their whole day in forests or mountain areas and are not used to sea. But elephants in Andamans were trained to swim as well as for carrying timber.

During the 1970s, an elephant named Rajan was introduced to this clan. Rajan was imported from the jungles of Kolkata to Port Blair for the same purpose. Nothing has happened as planned and the story changed after 2000 when the supreme court banned logging on Andaman islands in order to protect biodiversity. About 200 elephants that were imported for the timber carrying purpose were left at fate’s hand.

There was no demand to help these innocent creatures afterwards. At last, a wildlife sanctuary was established to protect these elephants on the islands. Between the year of 2000-2007, most of the privately owned elephants were shipped back to other places, where most of them died within a year too. The sanctuary nurtured only a few of them.

Rajan’s story unfolds after the issuing of the ban. He had a wealthy owner who rejected the offers to sell Rajan. Thus Rajan enjoyed his life swimming in the pristine waters of the Andaman sea. Finally, he happened to remain as the last swimming elephant of the island. Filmmakers came in search of him to star him in films and thus Rajan had to figure in an occasional film shoot.

He became famous in the year 2006, after being filmed as a swimming elephant in the Hollywood movie, “The Fall”. He was an obedient elephant. Slowly it became difficult for the owner to transport him back to the mainland and one day he finally got stranded at the Havelock Islands. A south Indian temple offered ₹24 lakh to his new owner to take him but a resort named Barefoot scuba of Havelock islands came in to help. The resort owner took his ownership by availing a loan.

Thus, Barefoot resort took the ownership of Rajan and after which he led a peaceful life with his mahout entertaining the tourists coming there. Fifty-nine-year-old Nazrul was the mahout of Rajan and they shared a lovely bond between themselves. Nazrul accompanied Rajan while swimming and took very good care of him. He noted that unlike other elephants Rajan was very comfortable with salt water and the ocean.

People from many other places like Chennai come to behold this swimming giant. People over there are very fond of elephants. The Tamil speaking folks were more acquainted with him as some of the inhabitants of the island have their nativity in Chennai. This marked a special bond between Rajan and the Tamil speaking clans. Even the resort official charged an amount for photo shooting Rajan in an effort to repay the loan back which was taken.

Thus indirectly, he helped his owners to repay the loan. Tourists find it interesting to watch Rajan walk on the islands and he was the only swimming elephant on the island. Rajan used to leave the resort early morning and would come back only after the sunset. He was a delight for the wildlife photographers and movie makers.

The resort tried to pay the loan back by charging for interactions with Rajan. Thus finally, they recouped the amount in an effort to make Rajan retire from his swimming duties. Children were very fond of him. He was considered the last swimming elephant by the national as well as international media and documentary makers. He raised enough money for his welfare by swimming with the scuba divers, and tourists.

No one ever reported any violent attack from his side at all. Finally, after 2014, Rajan retired from his swimming but he left with a bang. He got a chance to swim with the crown prince of Dubai in that very same year itself.

Finally, after leading a truly unconventional lifestyle, in the year of 2016, the last swimming elephant vanished from the islands of Andaman. He died while he was grazing through the forest at the age of 66.

These 66 years were a swimming saga for him. His body lays undisturbed in the jungles which were his adopted home. The world knew his parting when the former director of Barefoot resort quoted a parting text on his demise. He actually thanked him for being a part of the resort as well as that of Havelock islands. Fortunate are those who got a chance to see him in their lifetime.