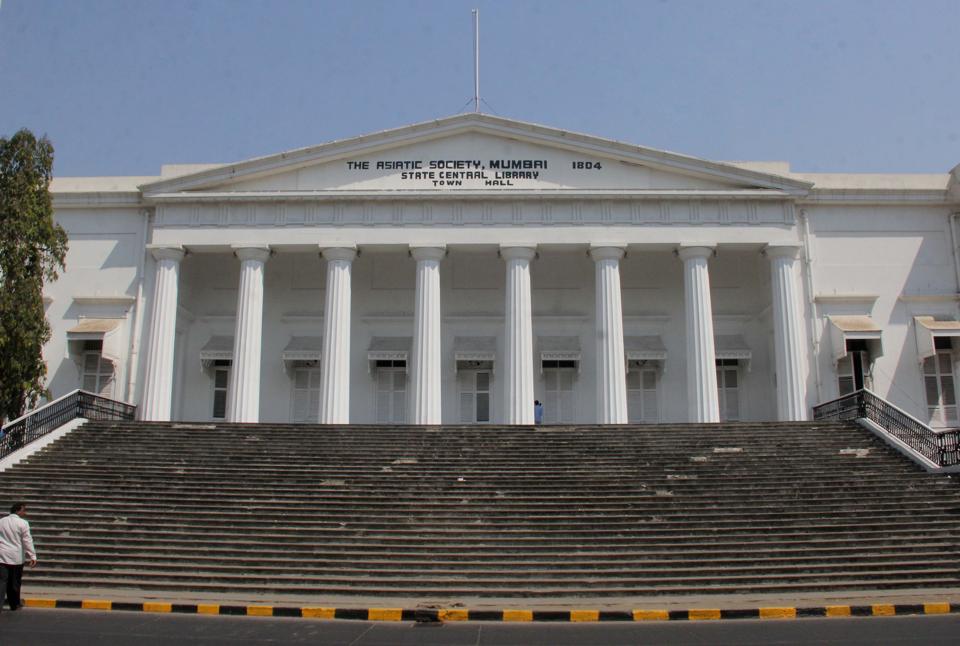 Books are mankind’s collective memory. They are tangible evidence of the evolution of the human mind – of our thoughts and ideas accumulated over centuries. Books are also, unfortunately, perishable in printed form, vulnerable to forces of nature and human negligence. And, often the loss of a particular book causes the cumulative loss of that particular memory.

The renowned Library of the Asiatic Society of Mumbai is struggling to save these memories. Housed inside the Greek-style Town Hall at Horniman Circle, the library is better recognised by its imposing architecture than its resources. The stylistic dominance of Doric columns and 30 tall steps hide the historic and literary wonders within, which includes a 19th-century copy of Firdausi’s “Shahanama”, one of the only two extant copies of Dante’s “Divine Comedy”, and a 16th century Sanskrit manuscript of “Aranyakaparvan” of the “Mahabharata”! The library holds more than 2.5 lakh books; at least 15,000 are rare manuscripts.

However, the library’s collection doesn’t receive much attention, partly because in the bustling Mumbai of today the idea of public libraries as centres of culture and art has slowly been replaced by the more opulent art cafes and poetry clubs that attract the youth. Most of these new age establishments have Instagram-worthy interiors, and the added advantage of food and drinks being sold under the same roof. The other handful of libraries in Mumbai don’t offer much in the respect of literary collections, and remain of interest only to scholars and researchers who may visit for a couple of weekend lectures and talks. The Asiatic itself has a membership of only 30,000.

Books are also beholders of identities. A majority of the invasions from the ancient and modern times have left behind charred manuscripts, dissolving a community’s contemporaneous identity to foist a new one. Much about civilizations and its people have been lost (and forgotten) this way, the Mayans being a popular case in point.

The preservation of the Asiatic’s collection is thus ironic and important. The society formed by British Orientalists (whose motives can be debated endlessly) amalgamated and organised manuscripts, writing and relics from across the country. Today the collection includes writings in Sanskrit, Arabic, Urdu and Prakrit. It holds volumes of books on the history of Maharashtra and has recently acquired a huge collection of writing by Pu La Deshpande, regarded as the foremost Marathi writer of the 20th century. In many ways, it carries fragments of identity from the past and the present. In Mumbai, which is slowly losing its unitary identity in its growing diversity, the library is perhaps where its memories can be saved and accessed.

Unfortunately, the grand Asiatic is fighting to survive. While the monument is being restored on a large scale with an allocation of ₹9 crores, the requests of saving its collection have been sidestepped. Earlier this year, Chief Minister Devendra Fadnavis inaugurated a finely renovated Durbar Hall and library and yet, six months later, the September rains in Mumbai ruined over 500 manuscripts – including a precious edition of poetry by Robert Graves.

A few decades ago, perhaps, this would have been an inevitable loss – but with the digital revolution, books have found the fountain of youth it so dearly needed. There are debates that digitization of books brings up. Who owns these digital libraries? Why aren’t they more easily accessible? But, these are lesser concerns easily outweighed by the biggest advantage of digitization – simple, low-cost preservation.

The costs, unfortunately, are high. According to library sources, it costs ₹2/page to digitize a book and ₹9/page to microfilm it. The total cost of digitizing a manuscript can be anywhere between ₹8,000 to ₹10,000. While the government has been trying to implement digitization of public libraries for the past three years, it has not been successful enough.

There are no grants large enough to support digitization of every book still living at the Asiatic. As a last and frantic resort, the Asiatic has turned to the people of Mumbai for support. Their crowdfunding campaign named ‘Adopt a Book’ allows anyone to virtually adopt a book by paying for its digitization. The initiative is being backed by a local NGO called Mumbai First which is hosting events for children at the Asiatic to bring people back to public libraries.

Asiatic’s ‘Adopt a Book’ campaign is a two-fold initiative. It aims not only at preservation but also at making the one-crore plus population of the city more involved in its collective memory – postcolonial and otherwise. By inciting ownership, it makes the people the patron of their histories, relics and writings.

While in the West, digitization is a growing call to action, few understand its importance and value in India. Which is why, perhaps, crowdfunding could help reconnect people with their memories and identities and call attention to the importance of their digital preservation.  Crowdfunding a digital library is a rare chance to transfer a civilization’s allied identity and memory across a gaping temporal abyss back to its people.